When the ﬁrst bridge was opened
in 1958, the designers of what
is now formally known as the
Burlington Bay James N. Allen Skyway
Bridge probably did not envisage the unrelenting growth in trafﬁc volume that would
follow.

When the ﬁrst bridge was opened
in 1958, the designers of what
is now formally known as the
Burlington Bay James N. Allen Skyway
Bridge probably did not envisage the unrelenting growth in trafﬁc volume that would
follow. Volumes have increased eight fold
from average annual daily trafﬁc (AADT)
counts of 17,000 in 1960 to 133,500 vehicles/day in 2004, resulting in the addition
of a second bridge in 1985. With these volumes, construction zone trafﬁc management
has become a major undertaking during any
topside bridge repair work.

Tony Thoms is project manager for general contractor ConCreate USL Ltd. on the
current round of Skyway repair work. Thoms
explains that the two high level bridges on
this arterial Ontario highway carry the Queen
Elizabeth Way (QEW) over the Burlington
Canal. The original 1958 bridge carries four
lanes of Toronto bound (northbound) trafﬁc
over the canal while the 1985 bridge carries
four lanes of Niagara (southbound) trafﬁc.
Extensive repair work to bridge expansion
joints would, at least on the night of Aggregates & Roadbuilding’s visit, require
closure of all four Niagara bound lanes and
full trafﬁc diversion around the bridge. With
volumes remaining high during the evening
and at night, construction zone trafﬁc control involved not only numerous contractor’s
personnel but also the Ontario Provincial Po-
lice (O.P.P.) as well as City of Hamilton and
City of Burlington police. Several Niagara
bound access points ahead of the Skyway
were closed, with all trafﬁc diverted across
the nearby lift bridge and along Eastport
Drive before rejoining the QEW south of the
Skyway.

The same night, resurfacing work on the
Toronto bound lanes being completed under 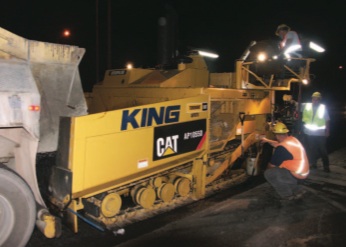 a separate contract would leave only a single
bridge lane open for trafﬁc during the night.
On that bridge, Thoms notes that the subcontractors’ decision to pave on a Friday night
was driven by allowed lane closures: “The
four lanes on the section being repaved are
numbered one to four from left to right (fast
to slow) in the direction of travel. Work that
night involved milling and paving a section
of lane two and the consequent closure of
lanes one, two and three. As a result, all trafﬁc would be conﬁned to lane four, with lane
three providing a buffer between live trafﬁc
and the construction crews working in lane
two. Contract conditions state that the three-lane closure could not begin before 11 p.m.,
while all lanes had to be fully reopened to trafﬁc by 7 a.m. on the following Saturday
morning.

The resurfacing work is part of contract
MTO 2007-2034, valued at $5.5 million, of
which paving is worth some $1.5 million.
Tender documents indicate that resurfacing
extends 2.2 km including bridge approaches
and involves the removal of 46 858 m2 of
existing asphalt to a depth of 40 mm. Some
4 800 tonnes of SP 12.5 FC2 mix will be
placed to a compacted thickness of 40 mm,
with subcontractors Hard Rock Paving and
King Paving and Materials completing milling and paving respectively. Resurfacing

began in the ﬁrst week of June 2008 and is
scheduled for completion in October.

King Paving’s vice president of operations
John Hutter explained that the night’s paving target was 1200 lane metres of lane two,
translating into some 4500 m2 or 450 tonnes
of hot mix asphalt. By 11 p.m., the work
crews and an impressive array of equipment
were in position. Hard Rock kicked off the
milling work utilising the company’s Terex
PR-800-7 cold planer, with the goal of milling a 1.5 km stretch of the 3.75 m wide lane
in about six and a half hours. The PR-800-7
made rapid progress, pausing brieﬂ y to raise
and lower across expansion joints. The edges
of the joints were milled shortly afterwards
by a Bitelli planer making a 600 mm wide
cut parallel to the joint edge. Several pieces
of clean up equipment supporting the planers
included a Bobcat S220 turbo with sweeper
attachment, a New Holland L170 skid steer
loader with sweeper and box attachment as
well as a Schwarze Industries M5000 broom
sweeper. After giving the milling operation a
start of about an hour and a half, the ﬁrst of
King’s paving crew went into action, applying tack coat with an Etnyre Black–Topper
asphalt distributor. 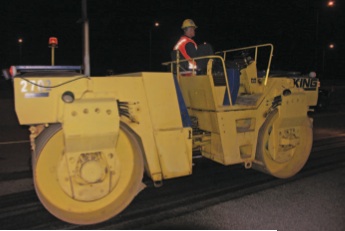 Hot mix asphalt for the job was produced
at the King Paving plant in Burlington, with
the company’s delivery ﬂeet including a Mack
Vision tractor unit teamed with a new Trail
King Industries Red River Series live bot-
tom construction trailer. On site, the mixture
was placed by a new Caterpillar AP1055D
paver equipped with Topcon controls and a
10-25B Extend-A-Mat screed. Behind the
paver, a Caterpillar CB534D roller in the
breakdown position made two passes fol-
lowed by a Bomag BW11RH nine-wheeled
pneumatic roller making eight passes. At the
rear of the train, a Bomag 164AD dual steel
drum made passes as necessary to ﬁnish the
mat. Asphalt raw material sources included
Canadian Asphalt PGAC 70-28 asphalt cement, coarse and ﬁne aggregates from the
Rosewarne quarry of Fowler Construction
Company Limited and chip sizes from the
Havelock quarry of MRT Aggregates Inc.