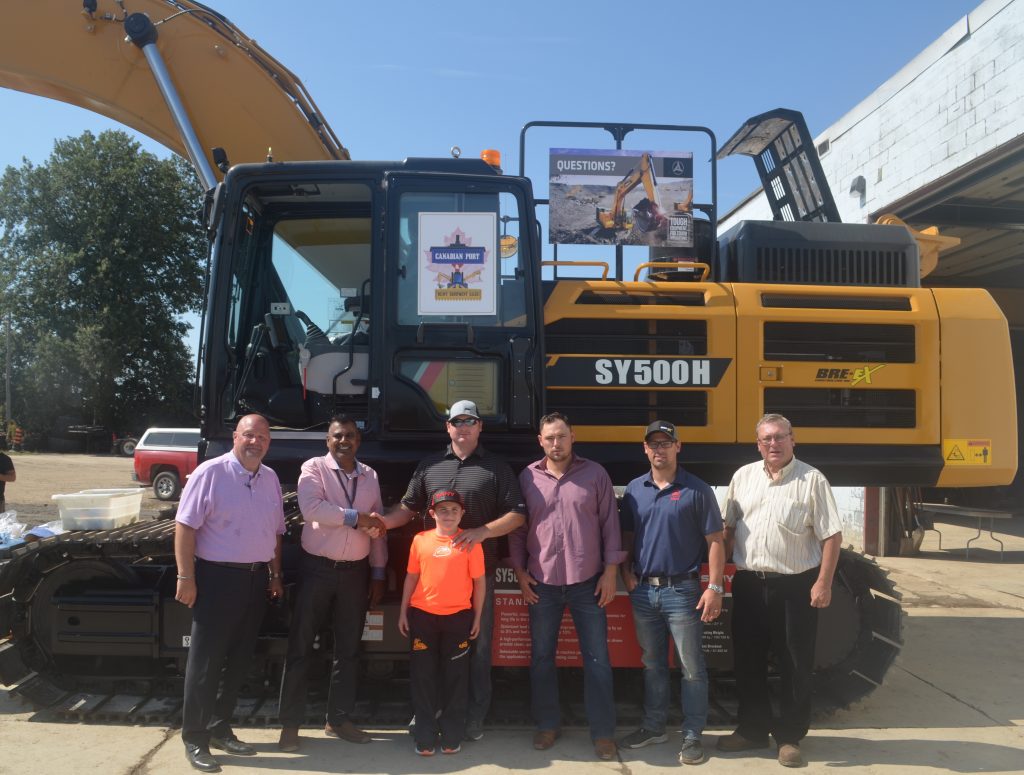 The Sany Group had its line of excavators on display in London and Wellandport, Ont. this past week as the company began an aggressive push into the Canadian market.

Although the company only entered the Canadian market a couple of years ago, the Sany Group is one of the top 10 construction equipment manufacturers in the world.

This past week, representatives for the company attended events at KOR Rentals in Wellandport, and at Bre-Ex Construction Inc. in London; along with regional Sany dealer Canadian Port & Heavy Equipment Sales Inc.

At KOR Rentals, Sany and Canadian Port & Heavy Equipment Sales were celebrating the sale of 11 excavators to the two-year-old rental company. The owner of KOR Rentals, Anthony Aantjes, is no stranger to excavation equipment. In addition to operating earthmoving equipment since he was 14 years old, working on his parent’s farm, he has also owned and operated Anthony’s Excavating Central Inc. for 16 years. The company employs 20 full-time staff and offers a wide variety of excavation services from road cuts to site servicing for subdivisions, shoreline protection, road construction, fine grading and much more.

Aantjes came across Sany Group while searching for used equipment to buy at an online auction based in the U.S. He started with one Sany excavator and was so happy with it he decided to add 10 more to his fleet.

“I was sold by the good quality and awesome finance rates and wanted to be a part of it,” he said during the event at KOR Rentals. “I honestly see Sany being the next Deere or Hitachi.”

Suman Mukherjee, regional sales manager for Canada for Sany America, said his company’s excavators are ideal for the rental market due to their relatively low purchase costs, finance options and five-year, 5,000-hour warranties.

At Bre-Ex Construction, Sany and Canadian Port & Heavy Equipment Sales celebrated the sale of Sany’s first 50-ton (SY500H) excavator in Canada. Like KOR Rentals, Bre-Ex, a third-generation family-owned company, purchased and tested out another Sany excavator (a 5-ton unit) before investing in the larger purchase.

“We had a lot of success with it,” said Bre-Ex president Cory Brekelmans, referring to the company’s 5-ton Sany excavator. “It was the quality that won me over.”

Already a fixture in the top 10 construction equipment manufacturers in the world, Mukherjee said he would like to see his company grow exponentially in the Canadian market.

“We want to be a top-four player in the market in the next five years,” he said.