The use of innovative de-icing technologies spreads in Canada 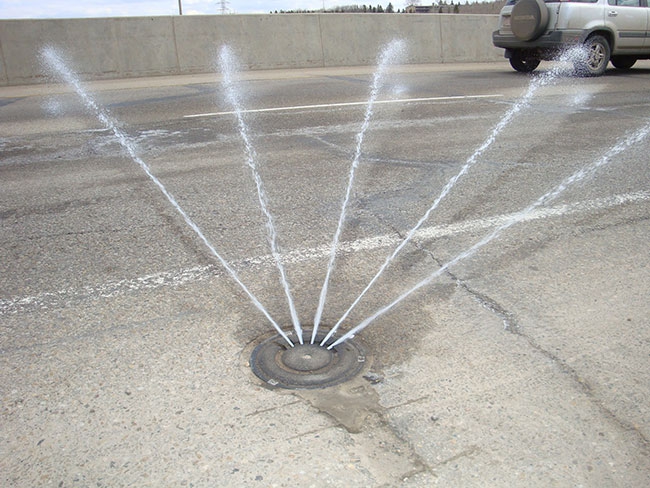 The FAST system uses real-time weather conditions to know when to spray anti-icing agents onto bridges.

There are many reasons why alternatives to salt, or methods for reducing its use, are becoming more popular across Canada.

There are many reasons why alternatives to salt, or methods for reducing its use, are becoming more popular across Canada. Environmental impact and cost are two of them, but some new de-icing methods are also providing greater motorist safety.

Cargill SafeLane is one of these methods. Part of Cargill Deicing Technology (with offices in Ontario, Quebec and the Maritimes), it’s an anti-icing and anti-skid overlay system which protects infrastructure from water and common contaminates. It comes in one version for pedestrian areas and another for roads and bridges. The adhesive materials in SafeLane seal the pavement to create a durable bond with the aggregate, and while installation costs are higher than that of standard overlays, SafeLane extends bridge life by minimizing water seepage and intrusion of corrosive agents like salt.

But it’s SafeLane’s “anti-icing on-demand” aspect that’s truly unique. The aggregate in the overlay stores de-icing chemicals and releases them when needed (these chemicals must be reapplied periodically). “The ant-icing action helps prevent wintry precipitation from bonding to the surface, which can create dangerous conditions,” Cargill Deicing Technology sales leader Sean Riley says. “Not only will this make the surface safer, but it will require less salt to de-ice than normal, reducing operations costs even further [and reducing run-off to surrounding vegetation]. Because it maintains a higher degree of chemical residual than typical asphalts and concretes, it allows the maintenance agency increased time between retreatments, especially in trouble or hard-to-get-to areas.”

There have been over 100 SafeLane installations so far in the U.S. and Canada, including bridge decks, intersections, on/off ramps, and parking ramps/garages. In terms of how much SafeLane can affect road safety, Riley points to an independent study conducted by the Colorado Department of Transportation in 2010. Department staff measured the performance of SafeLane on two bridge decks and concluded it showed excellent skid resistance for both ribbed and smooth tires after one to two years, and they expected it to continue to be an excellent wearing surface for at least several more years. The study authors also found that SafeLane “should be considered for use on high-crash rate bridges, where its high cost can be offset by an increase in traffic safety.”

In terms of an exact cost, Riley says it’s hard to compare SafeLane to other alternatives. “A normal asphalt or concrete overlay will cost less to install, but will not provide the anti-icing benefits,” he notes. “A different type of anti-icing technology will not provide the high friction wear surface or the infrastructure protection that SafeLane does.” He is certain that after installation, “the product provides cost savings and increased safety versus traditional overlays and winter maintenance practices.”

SafeLane must be installed by a contractor who’s been trained and licensed by Cargill. Before placing the overlay on a concrete bridge deck or road surface, it must be thoroughly cleaned by steel shot blasting. Asphalt surfaces (which must be older than six months) may be sandblasted or planed and textured to an approved depth and must be free of dust, oil, rubber and other extraneous materials before SafeLane is applied.

FAST
Fixed Automated Spray Technology (FAST) is a fully-automated system which applies an environmentally-friendly anti-icing agent onto bridges, based on actual real-time weather pavement conditions, as measured by special sensors installed on the bridge deck. The technology has been proven to reduce ice build-up, and is most suitable for surfaces particularly susceptible to early frost. The anti-icing agent is potassium acetate, which does not corrode steel, concrete or vehicle parts. It’s a biodegradable by-product of potash production that dissipates from the road surface after about two weeks. FAST is used by most major North American and European airports to treat their runways.

The FAST system continuously monitors conditions, and when critical threshold parameters are detected, spray nozzles at the edge of the shoulder (flush with the surface) automatically fire the potassium acetate onto the surface in the direction of travel. After spraying, the system continues to monitor road conditions and can do things like reapply the anti-icing chemical, or in the case of a heavy snowfall, deactivate itself.

FAST was first used in Ontario in 2000. “We are not sure who the actual inventor of the system is,” senior media liaison officer with the Ontario Ministry of Transportation (MTO) Bob Nichols says. “The first known FAST systems were installed in Europe in the 1990’s.” The MTO currently operates eight bridge FAST systems, with the first installation being in Prescott on the Highway 401/416 bridge. Subsequent bridge installations are in Niagara Falls (QEW/Welland River), Cambridge (Highway 401/Highway 8), Burk’s Falls (Highway 11/Magnetawan River), Arnprior (Highway 17/Madawaska River), Shannonville (Highway 401/Salmon River), Toronto (Highway 401/Highway 404) and Kitchener (Highway 8/Conestoga Parkway). The MTO is currently gathering data on these FAST installations to gain a full understanding of their effectiveness before planning future ones.

Safety has been improved, but the MTO only has limited data to share on that front. Nichols can tell us that, in the first season of operation at the Highway 401/416 site, there was a 100 per cent reduction in weather-related incidents. “Prior, there were 14 reported weather-related incidents in the winter of 1999/2000,” he says. “We do not have collision analysis for before-and-after installation available at the other FAST sites, but observations by field staff suggest a reduction at all sites.”

Nichols believes the rationale for installing a FAST system should be based on a cost/benefit analysis, which takes into account accident statistics. “Savings would be measured in terms of increased safety and improvement in operational response,” he notes. “Capital up-front cost and maintenance costs are high. Under specific road and weather conditions, highway maintenance crews may apply Direct Liquid Application (DLA) to the road surface. This is an anti-icing solution that is applied prior to a storm event to address the same objectives as the FAST system sprayers.”

The MTO has not changed the hardware much on its existing FAST systems, but the agency has installed a Micro-FAST system at Burk’s Falls on a trial basis to see how it works. It uses very small spray misters along the crown of the road, rather than larger spray heads on the shoulders. “So far, both systems are operating as expected, but haven’t been operating adjacent long enough to demonstrate a complete statistical analysis of trends or differences,” Nichols says. “This is the first winter of operation of the Micro-FAST system and it will be monitored closely to ensure that it works as well as conventional systems.”

In Alberta in 2011, a FAST system with 34 nozzles was installed at the edge of the eastbound lanes of the North Saskatchewan River bridge in Edmonton. The Anthony Henday Drive bridge was selected for the province’s FAST pilot program before its original construction, when the necessary plumbing infrastructure was installed. A similar device is being used on a Highway 63 bridge near Fort McMurray, a public affairs officer with Alberta Transportation, Melanie Nolan, says.

“No hardware changes have been made to any of the sensors, nor has the density of nozzles changed since installation,” Nolan says. “We still use the same spray programs as originally designed by the FAST vendor. The average annual operating cost of the system for two winters was approximately $72,000… We have not compared this to any other alternative maintenance efforts,” she says. Evaluation of the FAST sites will continue for several more years before any decisions on further installations will be made.

Other technologies
This winter, MTO plans on conducting more tests on some of the newer pre-treated salt options available. Nichols adds, “Mobile road sensors are being tested this winter that detect and transmit information on road surface conditions back to the maintenance patrol office instantaneously to help crews effectively plan plowing and salting operations.”