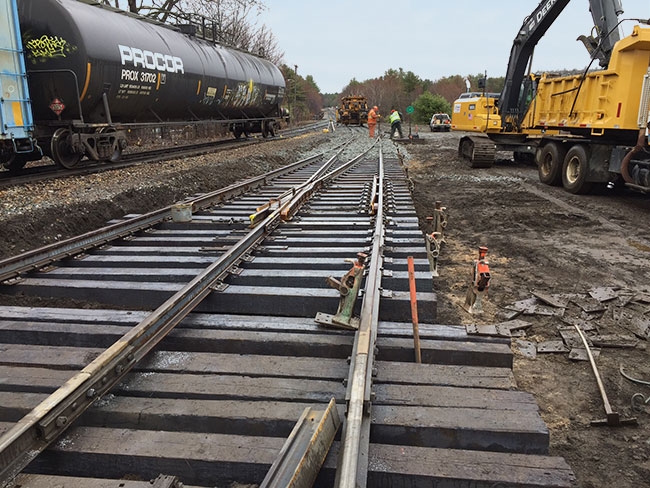 October 6, 2017 – The traditional three-part recipe for a railroad – rock, creosote-soaked hardwood ties, and ribbons of steel rail – has remained essentially unchanged since the first iron horse was put to work. And just as ties and rails require maintenance and eventual replacement, the rock, known as ballast, also wears down, and out.

A string of 286,000-ton railcars exerts enormous forces quite capable of displacing ties and rails. It is the ballast that keeps rail lines from coming apart. The best ballast has mostly fractured surfaces, which lock together under pressure and hold the ties and rails in place (Think of how stable a mass of assembled Lego pieces is, compared to how unstable underfoot a beach is, with its smooth stones).

But years of constant grinding under those trains inexorably smooth those fractured surfaces so they no longer interlock effectively – a process that wears out ballast in 25 to 35 years. Ballast also gradually gets fouled with plants and dirt, which ruins its critical ability to drain water away from the rail bed. Unstable subsoils can swallow up ballast, which then requires replenishment.

Take the sections of the Great Sandhills Railway (GSR) in Saskatchewan that are built on something the locals call ‘gumbo’.

“We have five trouble spots. They are 100- to 200-feet long. You put the ballast in and lift the track. The weight of the train pushes the track back down. But it pushes the ballast out the sides, like squeezing down on a cupcake. This clay moves when it is really wet or really dry. If you have one of these conditions, at either extreme, it wiggles all over the place,” says Gerald Poh, track maintenance supervisor with GSR.

Ballast deterioration, and the increasingly unstable track, forces trains to slow down, way down, until the problems are fixed. Railway companies work constantly on their ballast in what must add up to staggering quantities across the industry.

Take GSR, one of Canada’s roughly 52 shortline railway (SLRR). Usually quite short, in the “downstream” direction, SLRRs function primarily like tributaries, picking up product from customers along their lines, and delivering it to CN and Canadian Pacific (CP), Canada’s two huge mainline railways. In the “upstream” direction, they interline goods and raw materials from the mainlines for delivery to companies and communities along their routes.

Established in 2009, and operating 198 kilometres of track purchased from CP, GSR’s first few years of maintenance planning included laying lots of ballast of several varieties to spruce up the track.

“We’ve flirted with different types of rock; for example, 3.0 ballast [which is] three-inch fractured mountain rock out from British Columbia. We used that ballast for the first three to five years the railway was open, about 3,000 to 5,000 tonnes a year. 3.0 is very common and used in most branch lines,” says Aaron Wenzell, transportation manager for GSR (after that initial outlay, the company has been using an average of about 4,000 tonnes a year).

Compare that outlay with that of the Fortress Investment Group, which bought the bankrupt Montreal Maine & Atlantic SLRR in 2014, after the Lac Megantic explosion in 2013. Renamed the Central Maine & Quebec Railway (CMQ), in the first three years the company dumped 48,000 tons (it’s an American company) of ballast along the 481-mile-long track. The new ballast, plus some other improvements, allowed CMR to increase the average train speed from just 10 mph, to 25 mph.

And if that sounds like a tidy pile of rock, well, Huron Central Railway, a 173-mile SLRR running from Sault Ste. Marie to Sudbury, Ont., used 125,000 tons of ballast in its track rehabilitation. But these quantities are surely miniscule alongside the tonnage that CN, say, with over 19,000 miles of track, must use in a year (CN and CP did not respond to requests to discuss ballast).

Wenzell thinks that granite is the best rock.

“It really locks into place,” he says. “It holds your ties and track infrastructure together really well. It’s really amazing what the rock can do once it is locked, with new ties. It is a night and day difference between old and new ties. Once they are rounded, they don’t hold as well.”

Ideally, Poh says, “We prefer to use at least a two-inch crushed rock which has fractures on at least six faces. This lets the ballast interlock forming a hard bed under the ties and helps hold the ties against the dynamic forces of the railroad equipment and the weather.”

What appears to be the best ballast is described in specifications as having a minimum 70 per cent fractured surfaces. Thinking about how rock is blasted out of quarries, then broken down in crushers, specifying 70 per cent is another way of saying, “no smooth unbroken rock,” such as what one might find in river rock.

Poh sketches the least to most desirable rock for ballast.

“Pit run, which consists of rocks of various sizes and shapes mixed with sand,” he says. “This is good for a quick fix but is not good for any length of time; as the sand pushes out under load and does not grip the rocks or ties to create a stable road bed. Two-inch minus gravel consists of gravel that has the sand and rocks larger than two inches removed. The gravel is not crushed, so there are round rocks in it. The gravel is good for fill but will push out over time with the railroad equipment moving over top. Two-inch to four-inch crushed rock, this is better, as it has fractures on the faces of the stones and will knit together or pack and hold the track and ties in place and form a good road bed.”

But circumstances demand compromises, which works, if not for as long, as long as track speeds are low.

“Not everything is always available and it is not affordable. Yard track does not need the higher grade of ballast. If maintenance crews are doing yard track, they may use leftovers. Leftovers (undersize) are perfect for that application,” Wenzell says.

“We get some from the Rural Municipality of Happyland,” Poh notes. “They have a big pit along the South Saskatchewan River. They screen the sand and rock. We usually get the two-inch-minus rock from them. It is not the best rock, but it is rock. It is not something you want to use on a daily basis.

There is great sport to be had in researching the different materials used as ballast over the decades; for example, cinders, and even slag has been used.

“Slag is good stuff, but it is so hard it would damage the ties,” Poh says.

Looking for a trans-continental point of view of the different rock that is used for ballast, I contacted Vulcan Materials Company, the largest producer of construction aggregates in the United States. Vulcan has scores of quarries across the U.S.

“Most ballast is either granite, trap rock or basalt. Sometimes a high-quality limestone is acceptable. Certain limestone can be used on industry track or small railroads with low annual tonnages as long as it meets a slightly higher standard which is explained in the AREMA (American Railway Engineering & Maintenance of Way) Manual,” says C.H. Coleman, manager of rail sales with Vulcan.

Trap rock is a construction industry term for igneous rock used to make crushed stone. The rock types most commonly referred to as trap rock is basalt, gabbro, diabase and peridotite. One source characterizes trap rock as having excellent freeze-thaw resistance and good abrasion resistance, both of which sound like perfect characteristics for ballast, given the conditions they must endure.

Some things cannot be improved upon.