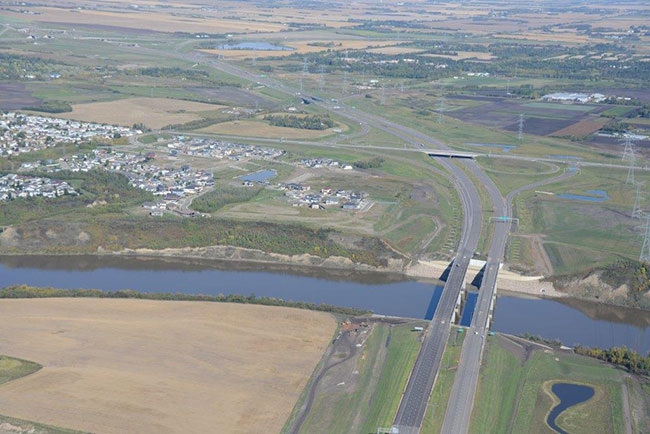 November 29, 2016 – With the cut of a ribbon, Alberta’s Northeast Anthony Henday Drive ring road project was officially opened this fall. That innocuous snip signalled something momentous for Edmonton and Alberta’s surrounding northern communities – something that has been talked about, planned and in progress for more than 60 years.

The final leg of the project drew to a close a chapter of design and construction unlike any other in Alberta’s history. Anthony Henday Drive is the first finalized ring road around a city in the province and Alberta’s single largest highway construction project to date.

The northeast section of the ring road extends from Manning Drive to just south of Whitemud Drive and opened to the public on Oct. 1, 2016, with off-highway work continuing to be finalized, such as landscaping and seeding.

The sheer amount of work required to achieve such a massive infrastructure undertaking is almost mind-boggling. The total price tag associated with the project sits at $1.81 billion – nearly half of the more than $4 billion spent to build the entire Edmonton ring road.

However, federal leaders say the benefit for the economy, residents and province is monumental for the ring road.

“This piece of infrastructure is enabling people to move quickly and really enhance our productivity and economic growth,” said Amarjeet Sohi, Minister of Infrastructure and Communities, as well the MP for Edmonton Mill Woods. He also noted that residents would immediately notice the difference when using the road.

The project fulfills part of the vision in the capital region that people have been discussing and working on since the early 1950s.

The ring road was created to reduce congestion and improve the flow of traffic throughout the Edmonton region, ultimately providing safe and efficient access to area highways and communities.

A project of this magnitude requires sections, and the Edmonton ring road has been completed as such, over its history. The first such ring road concept was devised by government officials in the 1970s, with ongoing work done throughout the 1980s and 1990s to acquire the required land.

The west portion of the road, between Yellowhead Trail and Whitemud Drive, was built about 20 years ago, followed by the southwest leg, completed 10 years ago. In October 2007, the southeast section of roadway was opened, followed by the northern section in November 2011. Design for this northeast portion was ongoing from March 2012 to December 2014, with construction starting in July 2012 and wrapping up this September.

Fast forward to late fall 2016 and the historic roadway now provides efficient links for all four corners of the province. Further afield, provincial leaders are also saying that it will better connect the province to national and international markets, thereby helping the economy by supporting businesses and future economic growth.

Brian Mason, the province’s minister of transportation, said the Northeast Anthony Henday Drive is an investment in the long-term safe, efficient movement of people, goods and services throughout the Edmonton region.

From a business perspective, he noted that local enterprise will also enjoy the benefits of improved market access in and around the city, which ultimately encourages economic diversity.

In fact, according to Alberta Transportation, even before the Northeast Anthony Henday Drive project was opened to the public it helped boost employment rates during construction. About 2,000 jobs were supported, logging more than 10,000 person years of employment in Alberta throughout the project’s procurement and five-year construction period.

Ed Gibbons, City of Edmonton councillor, said investing in the city’s infrastructure ensures that Edmonton will be able to keep up with future growth.

“We’re now closer to shaping an Edmonton that will meet the needs of a growing and diverse regional population,” he said during the opening of the ring road in early October.

Gibbons notes that Edmonton is a major supply and service centre for the northern communities and resource industry.

“We’re also the transportation hub for moving goods into and moving products out of western Canada and out of North America to the Asian market,” he said, adding that because of this the city sees a lot of heavy trucks passing through.

Gibbons noted that this will be alleviated with the completed ring road, meaning efficiency and traffic flow in the city can be vastly improved.

Now that motorists are rolling on the new ring road all that should soon be forgotten. Anthony Henday Drive will reduce driving time – and give residents a more streamlined approach to navigating the city and its outlying communities and municipalities.

The Alberta government estimates that with the final leg of Anthony Henday Drive now open, the number of vehicles travelling on the roadway each day will sit at more than 60,000.

Even so, Mason said the completion of the ring road cuts down on time spent behind the wheel of a car – which translates into improving the quality of life for residents.

“It means people will be able to get where they’re going more quickly, spend less time driving and more time with their families and going about their business,” Mason said.

Powered by P3
The project was originally forecasted to take longer to complete. Using Alberta’s P3 model for highways (built as a public-private partnership) allowed the Northeast Anthony Henday Drive to be finished in 2016 – shaving three years off the time it would have taken through conventional delivery. That move also means more money in resident’s pockets, saving $370 million for taxpayers. The subsequent 30-year maintenance contract will involve an additional 2,000 jobs for ongoing maintenance, operations and rehabilitation of the Northeast Anthony Henday Drive.

Part of that construction timeline was spent on accommodating a total of 47 bridge structures. This was comprised of 37 highway bridges, eight rail bridges and twin river bridge structures over the North Saskatchewan River. In fact, there is little about the project that isn’t impressive, with seven grade separations, nine service interchanges and a 27 km stretch of six-and-eight lane divided free flowing highway.

Then, taking into account utilities and stormwater management on top of that, the project’s depth becomes apparent. Even the amount of road signs required is notable – 58 overhead sign bridges, and 45 cantilever signs.

Although the ring road around Edmonton is now complete and operational, the province isn’t sitting still on the transportation front.

A similar project is still underway surrounding Calgary. Construction is currently ongoing on the final portion of that ring road in the southwest region of the city. That project is expected to be complete in 2021.