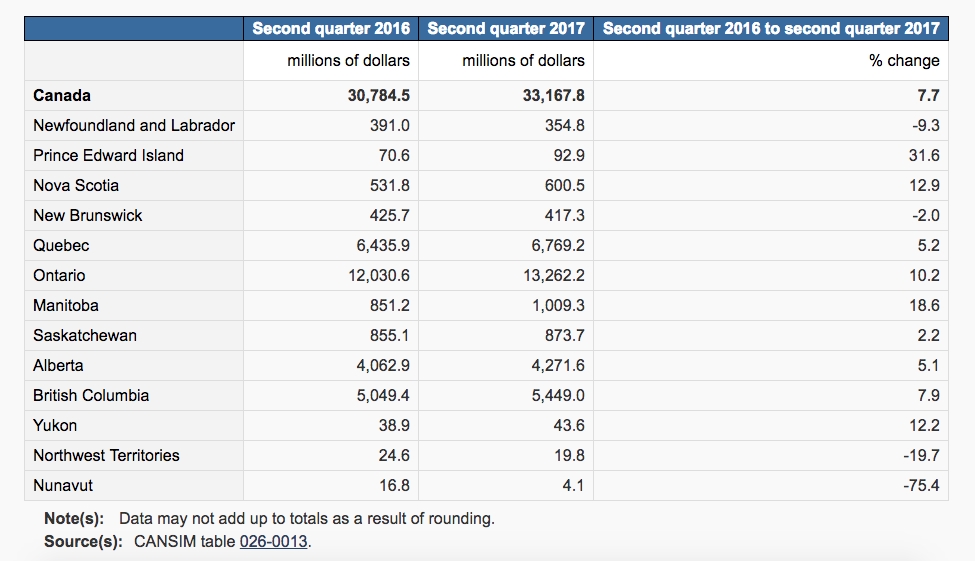 September 5, 2017 – Residential construction investment in Canada totalled $33.2 billion in the second quarter, up 7.7% from the same quarter in 2016.

Higher investment in every component except cottages contributed to the total quarterly increase. Investment in renovations totalled $15 billion (up 6.6%) and accounted for almost 40% of the year-over-year change at the national level.

Investment in single-family dwellings was up 12.9% to $7.4 billion, while acquisition costs related to new dwellings rose 8.2% to $3.7 billion.

Provincial highlights
Investment in residential construction rose year over year in eight provinces in the second quarter. Ontario (up $1.2 billion) posted the largest gain, accounting for more than half (52.0%) of the total national increase. Investment also rose in British Columbia (up 7.9% or by $400 million), while Newfoundland and Labrador (down 9.3% or by $36.3 million) and New Brunswick (down 2.0% or by $8.5 million) reported declines.

Ontario (up by $580.3 million) posted the largest quarterly increase in spending on renovations, followed by Alberta (+$168.0 million).

In British Columbia, the gain was mostly due to additional spending on apartment buildings construction (+$136.5 million).

Alberta reported its second consecutive year-over-year gain in residential construction investment, up 5.1% to $4.3 billion. This gain was largely due to higher spending on single-family homes and renovations.