Construction of an all-season road near Yellowknife is underway

Nearly 1,500 kilometres and a 16-plus hour drive north of Edmonton, nearly 150 people have spent the winter working on embankment and bridge construction for a 97-kilometre gravel road. Once completed in 2022, it will give residents of the community of Whati, just northwest of the Great Slave Lake, year-round access to the Yellowknife Highway.

Residents of Whati, a fly-in community of 522 people as of 2017 according to the Government of Northwest Territories (GNWT), currently only have road access south to the Yellowknife Highway during the short, and increasingly warm, ice road season. In 2019, for example, the winter road was only open from February 8 to April 12. And for some of this time it was only open at night when the temperature was low enough to make the road passable.

“The existing winter road is vulnerable to fluctuating climate conditions since much of its alignment is constructed on frozen lakes,” says Binay Yadav, director of transportation for the Department of Infrastructure, GNWT.

The Tlicho All-Season Road (TASR), for which the groundbreaking ceremony took place last August, is being built under a public-private partnership worth $411 million over 28 years. The federal government is paying 25 per cent of direct eligible capital costs and the GWNT the other 75 per cent. But for the first time, according to the GWNT, an Indigenous government, in this case the Tlicho government, will be an equity partner for a P3 project, with a total investment of $16 million.

The GNWT chose the consortium North Star Infrastructure (NSI) to design, build, finance, operate and maintain the road for the next 28 years.

“North Star Infrastructure is the project company. Kiewit Canada Development Corp. is the design builder. The crushing subcontractor is La Prairie and the road construction equipment is owned by Kiewit,” Binay says.

The two-lane road will be about 8.5-metres wide, with a 60-metre right of way, and a design speed of 80 kilometres an hour. It will require approximately 140 culverts, totalling 2,800 metres in length, and four single-span bridges.

For ecological and cultural reasons, Tlicho residents had spoken against bridges with middle piers touching water, according to the GNWT. The reference design concept included having one single-span and three multi-span bridges, but research during the bid phase of the project showed that using only single-span bridges was feasible and beneficial. For the contractor, benefits include the ability to pre-fabricate the bridges for higher quality, and shorter disturbances at construction sites.

Armstrong, B.C.-based Rapid Span Structures is the bridge prefabricator. One is 20-metres long, two are 30-metres long and the fourth is 58-metres in length.

Maintenance advantages attributed to the single-span designs include no issues with scouring, ice jams or trapped debris associated with the piers. Since there will not be any interior deck joints, the potential for water leakage and associated damage is lessened, according to a 2019 project description.

By December 2019, a worker camp with the capacity for 150 people had been set up, with 137 people working on the road. The total number of workers on the project is expected to peak at 240 people. The project’s remoteness, severe winters and permafrost pose uniquely northern-Canadian challenges.

“Extreme weather, for example, is expected to impact working conditions. The remoteness of the project adds complexity to ensuring the site has the resources, building materials, and site amenities required. Climate change, wildlife management, and meeting licencing requirements are some of the other challenges,” Yadav says.

Progress made before the beginning of the 2019-20 winter. All images courtesy of Government of Northwest Territories. 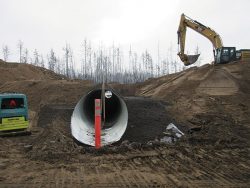 Providing winter coats, good boots, thick ham sandwiches and pie is one thing, but preserving the permafrost along the route is a moving challenge. A discussion of the different kinds of permafrost; e.g., is it continuous, discontinuous, sporadic, or even discontinuous sporadic, and how to deal with each type, is complex, especially as there is more than one permafrost type along the route. But its protection is a key goal, Yadav says.

“It is very important for permafrost to be preserved. Generally, ground disturbance or excavation are avoided,” he says.

“The permafrost is discontinuous, with a low ice content, and is generally degrading,” Cirelli notes. “Our geotechnical recommendations and design preserves the permafrost where possible and also accommodates potential degradation of permafrost.”

Fill will be quarried from sites along the road. Of the 60 granular and bedrock quarries that GNWT-NSI staff identified along the Tlicho road route, 21 were declared “preferred,” with a total area of about 15 million square metres. A 2019 updated project description calls for two gravel crushing plants.

The project description notes that 18 categories of equipment are expected to be required. They include five tracked dozers, five hydraulic excavators in the 30- to 90-tonne range, 15 rock/aggregate trucks, two pile drivers, and five tree harvesters.

Included in what will eventually total three temporary construction/worker camps, ranging in capacity from 50 to 200 persons, is a workshop large enough for maintenance crews to roll in equipment as heavy as 40 tons, plus there will also be other equipment shelters, Cirelli says.

“The project maintenance crew size varies over time, depending on planned equipment utilization and includes a lube crew, mechanics and supervision,” he adds.

As for the challenges using equipment in severe cold, Cirelli adds, “The work has been planned and scheduled to ensure suitable equipment is utilized in variable weather conditions.”

Two neighbouring communities, Gamètì and Wekweètì, will benefit from the Tlicho road.