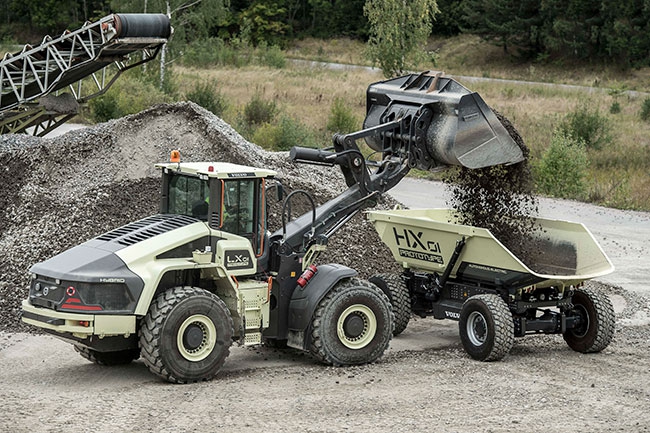 Volvo CE predicts that this project has the potential to reduce carbon emissions in certain transport stages by upwards of 95 per cent.

Volvo CE predicts that this project has the potential to reduce carbon emissions in these transport stages by upwards of 95 per cent, and could offer upwards of a 25 per cent reduction in total cost of ownership.

The company recently presented the SEK 203-million (or just over $30 million) electric site solution at the Xploration Forum in Eskilstuna, Sweden this past September. The company also unveiled its new concept HX1 autonomous, battery electric, load carrier at the forum. The prototype carrier is one element of the research project, which includes developing new machines, work methods and site management systems.

In addition to a fleet of HX1s, a prototype hybrid wheel loader and a grid-connected excavator make up part of the electric site system.

“This research project is a step towards transforming the quarry and aggregates industry,” stated Johan Sjöberg, technical specialist in site automation at Volvo CE. “By using electricity instead of diesel to power construction equipment in a quarry we have the potential to deliver significant reductions in fuel consumption, CO2 emissions, environmental impact and cost-per-tonne. The electrification of construction equipment will produce cleaner, quieter and more efficient machines – this represents the future of our industry.”

Although the site test is located in Sweden, Volvo CE believe the technology would be applicable for the North American marketplace. The company stated that the project aims to develop a “modular and sizeable solution for an electric site that can be adapted to fit different needs and deliver optimal efficiency for the complete site layout.”

In other words, it would be tailored to the needs of each individual customer.

Volvo CE predicts that this project has the potential to reduce carbon emissions in certain transport stages by upwards of 95 per cent.

Partnership breakdown
Every player involved in this innovative site project has an important role to play to ensure its success.

Volvo CE is coordinating the overall project and is responsible for developing the machines and systems. Skanska Sweden, one of the world’s leading project development and construction groups, is providing logistical solutions, application relevance and job site knowledge.

The Swedish Energy Agency, a government agency for national energy policy issues, is helping fund the site project by providing SEK 65 million in funding, or just over $9.7 million. Volvo CE has invested SEK 129 million in funding (or approximately $19.3 million); while Skanska Sweden has contributed SEK 9 million (or about $1.35 million).

The research site project got underway in October 2015 and is expected to be complete in late 2018.

Volvo CE is in the process of developing and testing the technologies, concept and prototypes in-house that it will be used for the site project. Those machines will then be incorporated into one of Skanska Sweden’s quarries in Western Sweden for a total of 10 weeks, where the electric site concept will be tested. Volvo CE plans on examining the results from the test to see if the electric site concept is commercially viable for the industry. Volvo CE has stated that this project is strictly a research project with no plans for industrialization for the time being.

“This type of cooperation between Volvo CE, its customers, governments and academia allows us to invest in new technologies and explore solutions that are both relevant for our customer base and address future challenges,” says Erik Uhlin, advanced engineering technical project leader at Volvo CE. “Each year Volvo invests a substantial amount of money in emerging technologies, advanced engineering and product development. But without vital public funding and support from partners it would not be possible for research projects like this to go ahead.”