Montreal will spend nearly $6.4 billion on capital works projects over the next three years. 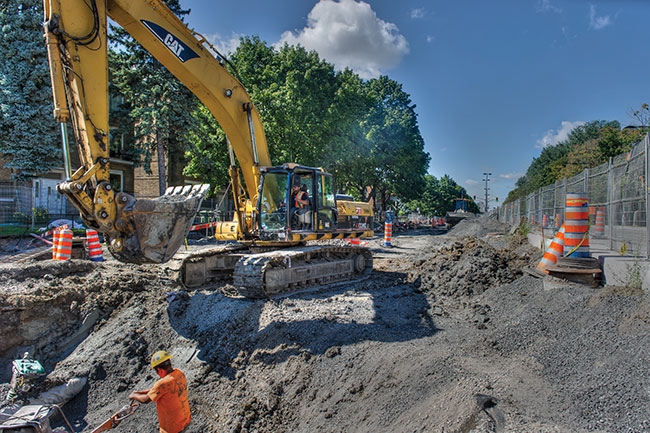 The City of Montreal will spend nearly $6.4 billion on capital works projects over the next three years, with most of the funds going towards repairing and improving the spaghetti-like network of roads and bridges, and renovating aging water pipes and sewers.

About $4.2 billion – or 65 per cent of the funds – are being set aside for renovations of roads and water infrastructure.

Montreal Mayor Valérie Plante says the program sets out the priorities and new projects the city will focus on over the course of a three-year mandate.

“As you know, mobility and the quality of our water infrastructure sit atop our priorities,” Plante explained at a press conference. “We have set aside important budget items for these long-term projects. Montrealers deserve quality, sustainable infrastructure and planning ahead is always a lot cheaper than reacting to emergency works.”

The capital works budget covers a variety of projects and programs that the city plans to carry out or undertake over the next three years to improve the quality of life of citizens. However, the main focus is roads and underground water and sewer infrastructure. Proponents of the plan maintain the infrastructure investments were necessary to offset the deficit of past years and, further, to maintain the assets in good condition for the future.

Over the three years, $2.2 billion will be spent on the repair, redevelopment and reconstruction of road structures and $1.9 billion is earmarked for underground infrastructures like water pipes and sewers.

The rest of the money is being allocated to buildings, parks, green spaces and playing fields and other assets like office equipment and furnishings, vehicles, machinery and tools.

The budget to upgrade and replace street lighting is set at about $91 million and $62 million is allocated for the repair of road structures to ensure their safety and continuity.

A 2.2-kilometre redevelopment of Saint-Catherine Street West at $95 million is the priciest road project on the books. It will be completed in two stages. The first stage is between Bleury and Mansfield streets and the second is between Mansfield Street and Atwater Avenue.

Nearly $73 million is earmarked for the reconstruction and rehabilitation of Pie-IX Boulevard. The project involves reconstruction of the roadway, along with sewers and watermains and sidewalks and the addition of 430 trees to make the area pleasant for pedestrians.

Another $61 million is set aside for the redevelopment of St.-Hubert Street between Bellechasse and Jean-Talon streets, which is a major commercial artery of the city. Underground sewers and watermains are outdated and in need of replacement. In addition to unearthing of the underground infrastructure, public areas will be developed and improved.

Of the money for underground infrastructure over three years, about $1.7 billion is for water infrastructure, including $537.4 million in 2018.

The biggest chunk, about $513 million, has been allocated for a secondary watermain and sewer network renovation program, while approximately $208 million is earmarked for an ozone wastewater disinfection project, and about $162 million is set aside for work operations on the Rockfield, William, Lavigne, Leduc and Saint-Thomas retention structures.

Another $127 million is for the Rosemont and McTavish reservoirs and pumping stations, approximately $114 million is set aside for work on the network of primary water lines, and about $104 million is for projects to modernize four drinking water plants.

As part of the capital works plan, the city is also adopting a number of new techniques, procedures and materials to improve the quality of its road system and sidewalks.

For example, the city will use High Modulus Asphalt for a project along Henri Bourassa Boulevard between St.-Hubert and Lajeunesse streets. The asphalt was developed in France more than 30 years ago and is intended to reduce the thickness of roads while still providing sound performance. City of Montreal communications representative Audrey Gauthier says the asphalt has yielded satisfactory results in Europe and the resistant pavement meets the specific requirements of the roadway and high traffic expected due to numerous bus routes in the area.

Moreover, says Gauthier, the city will continue to use glass-powder concrete for sidewalks, as this represents an ecological solution that is less expensive and as resistant as regular concrete. In 2018, about 10 pavement projects will include this kind of technology.

Gauthier says the city also adopted a new policy aimed at better co-ordinating work between Bell Canada, Hydro-Québec and Énergir when construction planning is being done.

The Insurance Bureau of Canada (IBC) welcomed the public works plan, and specifically the amounts allotted for repairs to underground infrastructure and spending on water and roads.

“The P&C insurance industry is pleased about the City of Montreal’s actions, which will certainly help reduce the number of claims and thus improve the quality of life of its citizens,” says Johanne Lamanque, vice-president, Quebec, at IBC. “Water damage has been the leading cause of claims in home insurance for the past 10 years. In Quebec alone, water damage accounts for the more than $500 million paid out every year in claims.”

The greater frequency of extreme weather events in recent years has exposed the weakness of the country’s infrastructure in certain areas, Lamanque noted, and breaks in municipal infrastructure are, in fact, responsible for 60 per cent of the water damage while 40 per cent is due, in part, to water seepage and broken pipes or sanitary installations inside homes.

However, a number of politicians on Montreal city council, including councilor Lionel Perez, leader of the official Opposition, weren’t happy with the plan. He said, after the public works budget was adopted, that Mayor Plante and her administration were too keen on spending when they should be cutting costs. The budget demonstrates that the current administration, “is one that is keen on spending and does not have the capacity to make hard choices to limit expenses,” he said.

All suburban mayors on the council voted against the capital works plan saying too many of their priorities were left out and the debt being taken on by the city is too high.