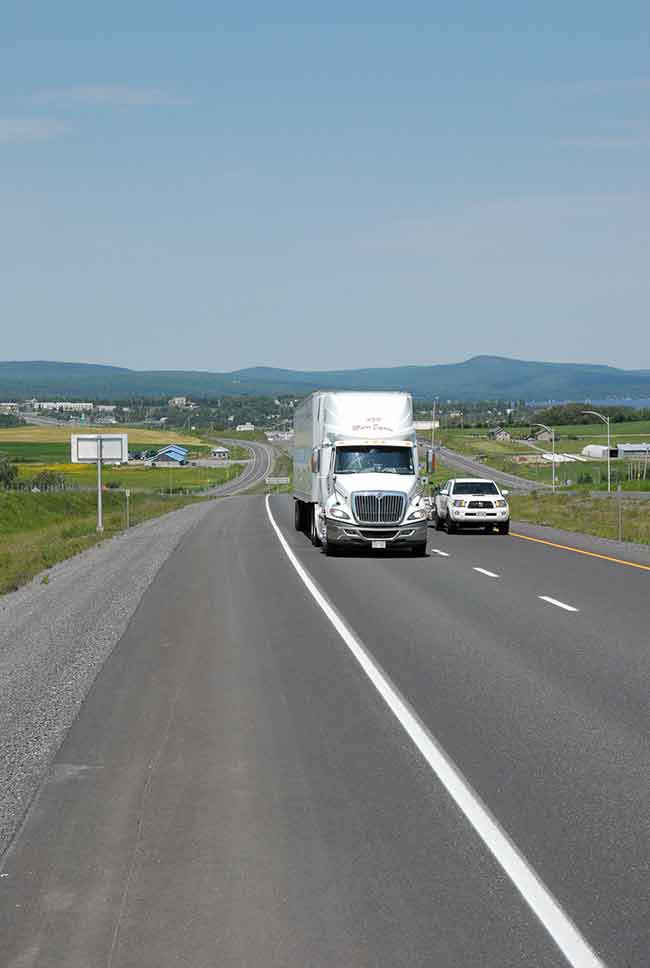 August 5, 2016 – Every summer, Quebec’s road network sprouts traffic cones in the tens of thousands at dozens of work sites. Three projects, however, are worthy of special mention: the huge Turcot Interchange replacement in Montreal; the upgrading of the notorious Route 389 on the North Shore; and Phase III of the twinning of Route 185 between Riviere du Loup and the New Brunswick border.

The Turcot Interchange
The $3.7-billion Turcot Interchange replacement megaproject will bring down to earth the confluence of Autoroutes 15, 20 and 720 – completed in 1967, just west of Montreal’s downtown core. It is most notable for its 1960s engineering, which includes more than 128 lane kilometres of crisscrossing, elevated concrete highways that soar up to 30 metres above the ground, and for several years now, have been notorious for their deteriorating states.

In addition to replacing much of this convolution of concrete spaghetti with steel girders in the central sections and building elevated sections on embankments and retaining walls, there will be more greening of the urban environment. Public transit measures include a reserved bus lane and a possible rail link with the Montréal–Pierre Elliott Trudeau International Airport and the West Island.

Around 700 employees are working away this summer, building overpasses, replacing exits and bridges and sketching out some of the new roadways that will eventually connect these new structures.

The Turcot Interchange has many active work sites this year. The list of announcements to the public of works in progress numbered 16 in late June. They include road closures, blasting, work on the foundation of the Lachine Canal bridge, the dismantling of Montreal’s former ecocentre and the foundations for an A-720 detour road.

To cite a few other examples, the Atwater exit is being rebuilt. The new eastbound section of Route 136 between the Turcot Interchange and Hallowell Street is under construction, and two lanes for it will go into service this year. Detours are in place so crews can work on structures running under Saint-Rémi, Saint-Jacques, De Courcelle and Greene Streets.

The biggest of the active projects this year include the Saint-Jacques overpass, which runs under the A-15, and the commencement of its reconstruction; building the steel structures for several other overpasses; and demolishing a CN train tunnel.

While most of the elevated roadways are still in place – sections can only be removed as their replacements become ready for the 300,000 cars that drive through the Turcot Interchange every day – crews did take down a section of the A-15 this April and June. The demolishing of the eastbound A-720 should begin this fall.

Repair work on the elevated roadways, some sections of which are alarmingly deteriorated, is a constant in this construction landscape.

As sections of the new Turcot Interchange are completed over the next four years, they will be put into service. The entire project is still scheduled for completion in 2020.

Route 389
Choosing well-known Quebec City as a starting point on the North Shore of the Saint Lawrence River, drive east for 438 kilometres on Highway 138 to Baie-Comeau, Que. Hang a left there (heading north now) and you will be on Route 389, said by some to be the most dangerous highway in Canada. One joke goes that the road is so twisty that you can see your own taillights.

The first leg of this 566-kilometre epic ride to Fermont, Que., where Highway 500 to Goose Bay begins, takes you on a paved, but twisty and narrow ride to Manac-5, a Hydro Quebec power dam. The next 250 kilometres to Fermont, Que., has long been unpaved with forests growing right to the edges of the road. Truckers have reported having to grind along as slowly as five to 10 kilometres an hour.

The decision whether to pave the whole of Route 389 by the end of six years is still in the planning stage. But so far, crews have vigorously removed trees, reconstructed sections of the road, corrected curves and road profiles and installed guardrails over approximately 100 kilometres of road.

About 30 workers are in the field this year. Their tasks include filling potholes as well as other types of repair and reconstruction of various sections of the road. Challenges in this work that Transports Quebec reports include keeping the traffic moving through the work sites; keeping open side roads to chalets, residences, trap lines, businesses and industries; and coordinating the relocation of public services. Additional challenges include optimizing the road where it goes through mountainous and rugged terrain, around lakes and rivers and across wetlands – including areas where there are protected species.

Route 185/Autoroute 85
Route 185, which runs south 101 kilometres from Rivere du Loup, Que. to the New Brunswick border, is referred to by Transports Quebec as the A-85 (defined as a highway divided by a median) and Route 185 (a designation for two-lane road). Thirty-nine kilometres of the road, from Saint-Antonin, Que. to Saint-Louis-du-Ha! Ha!, Que. remain to be twinned.

The provincial and federal funding to twin this section, which is Phase III of the twinning that began back in 2002, is currently set at $947.3 million. The actual roadwork will begin in 2018 with Transports Quebec bringing twinned sections into service between 2021 and 2025.

This year, the route is being inventoried and tree removal has begun. In the short-term, some of the untwinned sections are being upgraded to improve road safety. The budget for the safety improvements is $2.7 million, and the work is already visible – such as paving and other work to make it safer to enter and exit a major service station just south of Riviere du Loup, for example. The safety upgrades include improved signage, line painting, rumble strips both along the centre and both sides of the road, brush removal to increase visibility, paving, improving some of the corners and adding lighting in places where drivers have had difficulties perceiving the curves.

Transports Quebec states that the biggest challenges will be keeping the traffic on this route, a section of the Trans-Canada Highway, flowing during the construction work, which includes building service roads and five interchanges. Terrain challenges run from the need for dynamiting to turning peat bogs into solid road substructures. As with other sections of Route 185, there will also be stretches of animal fences installed.

It will have been a long haul to complete this twinning, but Route 185 is the only section of highway between Halifax and points west of Toronto to remain untwinned. Transport companies will be delighted to be able to haul their long combination vehicles (a tractor pulling two 53-foot trailers) without having to break them down to cross the two-lane section of Route 185, as they are currently required by law to do.