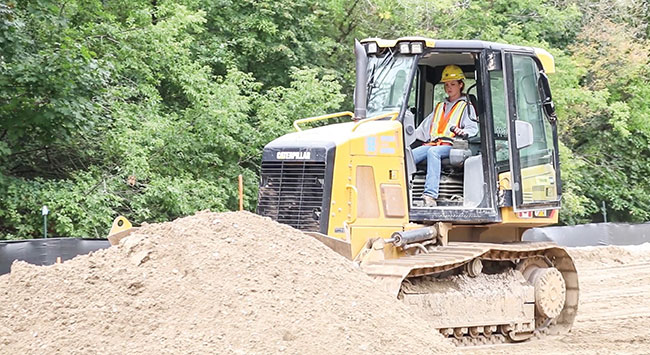 Larissa North pushes on the levers and the muddy tracks on the yellow bulldozer begin to turn. The machine lumbers forward, and the heavy metal blade scrapes the ground, pushing a small pile of grey-brown dirt.

For the 24-year-old operator, a graduate of the heavy construction equipment operation course at Conestoga College in Kitchener, Ont., it’s all in a day’s work.

Since graduating from the year-long course, she’s been pushing dirt on road building and reconstruction projects for Steed and Evans, a heavy civil engineering and infrastructure company in St. Jacobs.

“We’ve been working on in-the-city roadwork for paving and that sort of thing,” she says. “We’ve been doing sewers, paving, we do curb and all of that. My job is the road etch, so I do grading of the gravel. We remove the old asphalt and sidewalk and haul it out and then put in fresh gravel before the paver comes in.

“It’s nice to be outside every day. The jobsites are always changing because I do the grading, so I go from site to site. I get to work with a whole bunch of different people which is really great. Everybody is really nice.”

For North, it’s the perfect career. After graduating from high school, she worked various jobs for several years but wasn’t quite sure about what career path to follow. Then a friend gave her a suggestion.

“I wasn’t really sure what I wanted to do,” says North. “I was interested in art and landscaping and stuff like that and a good friend of mine mentioned a program that he was taking at Conestoga. My friend had talked about how good the program was and when I went in, I thought it was really interesting.

“I got the pleasure of going into a class and I got to see what was going on. Since I was kind of interested in landscaping and whatnot, I thought, ‘This would be kind of like a step up.’ It was really interesting. I got to meet the teachers and it was really great.”

North was hooked. She enrolled in the course and took the first step to a new career. A year later, she had her certificate.

As part of the practical field training, she learned how to operate various pieces of heavy equipment, including dozers, excavators and tractor-loader-backhoes. She also was exposed to compact equipment and paving operations. That practical experience was complemented by theory and in-class learning on such related topics as environmental practices, soils, concrete and asphalt, and surveying and site plans.

Students also learned how to prepare logs, records and documentation to record operating hours, equipment checks and maintenance and how to work in compliance with occupational health and safety policies.

Prior to enrolling in the program, North had never operated heavy equipment.

“It was like totally new to me. I didn’t really know a whole lot,” she says.

But she picked it up quickly.

“In our program, we got to learn different pieces of equipment,” North says. “We would do the excavator, bulldozer, loader, the backhoe, but what I liked the most was the bulldozer and that’s what I was shooting for.”

When North started at the school, everything was new. The training gave her the skills to build on. She learned about construction, the machinery, how the industry operates and how a road is put together.

She likes the fact that every day is different, and the work is challenging: all the right ingredients.

“I think it’s the movement,” she explains. “The job is constantly changing, and I have to pay attention all the time. It’s a really detail-oriented kind of thing and it’s busy and you’re not always in the same place.”

North, a member of Local 793 of the International Union of Operating Engineers, was at an end-of-the-year barbecue following completion of her college course when she landed the job. 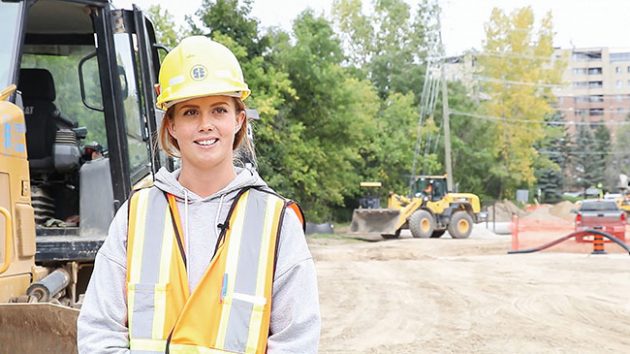 “The boss from the company had come in and he said that he liked the work that I was doing so he offered me a position as a bulldozer operator with them which was great.”

North is a fine-grade bulldozer operator and has worked mostly in the Kitchener-Waterloo and Cambridge areas. She’s also worked on road projects in Hamilton and Guelph.

In addition to the dozer, she operates skid steers, loaders and packers for Steed and Evans.

The first year in the field, she worked on an open-cab CASE dozer and was then trained on a GPS dozer.

North had to learn a lot about the new system.

“Every day I just keep asking questions and learning constantly, which is really good because it keeps me alert and busy.”

Earlier this year, North participated in a two-minute video which is part of a series produced by Job Talks, an organization supported by a number of construction groups that introduces parents, teachers and counsellors to careers in construction. The videos feature young people who have found careers in the industry.

In the video, she explains what the job entails and what attracts her to the career, namely the challenge and the fact the job varies depending on the material, the weather, and how well the dirt is compacted.

With the current pace of construction, there is a high demand for skilled heavy equipment operators to support the industry.

Construction research group BuildForce reports in its 2019 labour market forecast that more than 103,900 new workers will need to be recruited in Ontario over the coming decades in residential, infrastructure and other construction sectors due to the rising number of retirements and to meet peak demands.

While construction is still a male-dominated industry, North notes that has not been an obstacle and her experience has been great.

“Everyone’s really happy for me and very proud. It’s been really good, she says.”

For women pondering a career in construction, North recommends it; although she does say it is not for everyone.

“I think it’s like anything if you’re willing to work really hard because it’s long hours and stuff like that. Honestly, it’s great. It’s a great job and it pays very well. But you would have to want to do it and stick with it,” North says.

Her family has been supportive of her career choice.

“My dad loves it and my grandpa and stuff like that, they’re like, ‘Holy cow, that’s so cool,’ kind of thing.”

While she’s worked on several projects now, interestingly, North doesn’t have a favourite.

“To be honest, I really like every job,” she says. “It’s been pretty good.”