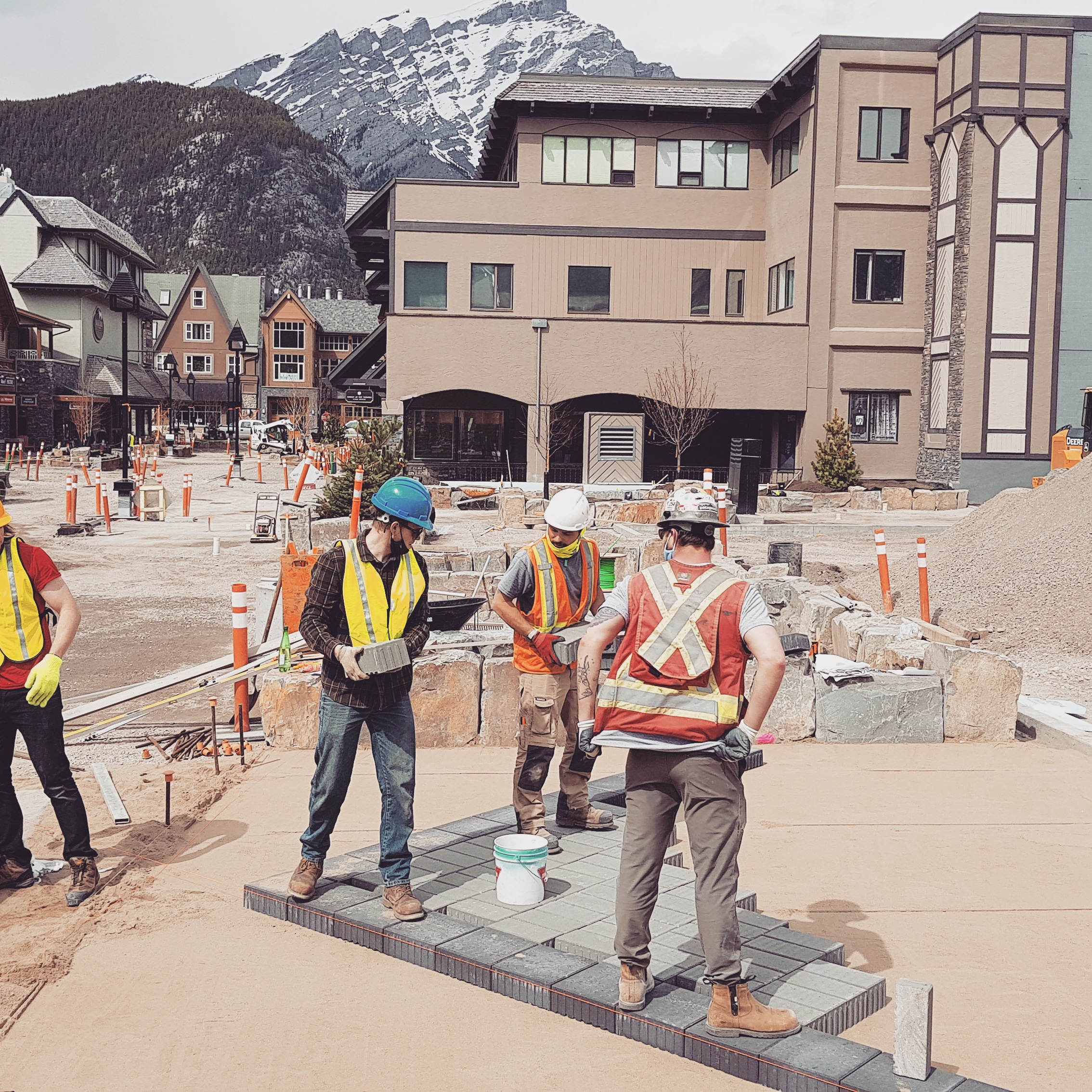 In Banff, Alta., Bear Street resides along a quiet street adjacent to the bustling Banff Avenue and just a two-minute drive to the Trans-Canada Highway.

Lined with numerous restaurants, retail and service businesses, Bear Street is a vital part of Banff’s economy as it draws both tourists and residents. However, Bear Street’s proximity off the main drag led to fewer pedestrian visitors to it than on the much busier Banff Avenue.

To create equity between the businesses of the two streets, the town adopted a plan based on the Dutch concept of “Woonerf,” or living street. A street designed this way has no physical barrier between cars and people, forcing drivers to slow down and pay greater attention to pedestrians and bicycles. One of the best practices for creating a shared roadway such as this is to install a uniform surface suitable for cars, pedestrians and bicycles alike. In Banff, designers chose to use Belgard’s VS 5 pavers to accommodate all potential users.

As Covid began to take hold in North America in early 2020, the town council decided to move forward with the project to create a shared space on Bear Street.

The new plan called for an urban plaza prioritized for pedestrians but on which “cars were welcome as guests,” explains Pierre Hugues Gagnon, project manager and engineering coordinator for the Town of Banff. “The design strives to find the balance between pedestrians, cyclist and motorists seasonally by doing design tweaks as needed.”

“Redesigns such as this would usually result in a space that is closed to vehicle traffic,” said Jessica Wheatley, engineer and manager at WSP Canada, Inc. As project manager for the consultant team, her responsibilities included overseeing the overall design as well as leading the civil design, utilities and stormwater management. “In this case, though, there are three underground parking garages and a municipal surface lot just off Bear Street that could not be blocked. There are also several restaurants and shops downtown, as well as many professional and medical services. All those involved with the project were cognizant of the need to make the street accessible to everyone, including those who could not walk or ride a bike to the area.”

To create a safe space, designers employed many traffic-calming strategies in the design of the new space. This included placing the paver design at a 45-degree angle to the buildings rather than reflective of the straight lines of a traditional road, placement of removable bollards to limit car movement within certain areas, and planters (built of boulders) that visually signify that the space between them and the buildings as a pedestrian only zone versus a shared zone in the centre.

By placing a fire pit in the middle of the shared roadway, cars are naturally directed in an “s” pattern around it, which calls for a slower speed than the straightaway. The use of pavers also offers a traffic calming effect in that their visible texture automatically makes drivers want to slow down. These subtle cues to reduce speed were particularly important for this project because Bear Street is just two minutes off a fast highway and drivers quickly need to be put in a town driving mindset.

With its many different users, the project posed several challenges, among them the need for a surface that was attractive and inviting for pedestrians but strong enough to support vehicle traffic (including heavy emergency vehicles).

Kelsi Hurlbut, principal landscape architect with The Tula Project, specified Belgard’s VS 5 pavers for Bear Street because she was confident both in the product and the service team behind it.

“I’ve always felt I’ve gotten a good response from the team whenever I needed them,” said Hurlbut. “For this project, I appreciated that they had both the ability and willingness to do on-site mock-ups of the layout. They first laid out the pattern at a warehouse in Calgary so we could figure out the pattern in a way that wouldn’t require cutting, then laid it out again on site on Bear Street before the work started so we could double-check.”

Hurlbut also chose VS 5 pavers because the vehicle-grade pavers interlock on four sides and the ridges on the bottom grip the gravel underlayment. It was important to her that the shared roadway have minimal vertical movement, continuing to lie flat and level over time.

“Keeping in mind the need for this surface to be accessible, I was aware that pavers can sometimes be difficult for people who need to use mobility aid devices—or even for people pushing strollers. I was confident the VS 5 pavers could be set to the tight tolerances I specified –even over time, use and seasons.”

Hurlbut specified a very small three-to-six-millimetre elevation between pavers, each other or surrounding elevated structures.

From the Town of Banff’s perspective, Gagnon adds, “Expocrete has a plant about an hour and a half away, so we liked that the product was locally sourced. It was also a proven product, already in use in another sidewalk in town.”

Another significant challenge for the project team was stormwater management.

“This was particularly important given the shared street concept. Pedestrians are the first to experience barriers due to ponding in a storm and experience it the longest,” explains Wheatley. “Usually, water ponds below a raised curb and pedestrians have dry sidewalks to walk on above that. In this case, we had to accommodate for the single level to ensure pedestrians stayed dry and to mitigate risk to the buildings.”

Team engineers and landscape architects used trench drains set into and flush with the road and graded the surface for the most advantageous runoff. They also incorporated a series of soil cells. These structures hold loose, high quality topsoil below the paved surface. Trees are planted above the cells and have access to the rich nutrients in the soil, as well as water that collects there after it rains. The organic material in the cells filters contaminants from the water that seeps down through it, and that water then enters a drainage system leading to the town’s storm drain. Since this ultimately flows to the Bow River, the soil cell system minimizes the impact of the inflow to the river.

“The soil cells allowed us to increase the capacity of the stormwater management system while also supporting the trees that are an important part of the aesthetic of the town as part of a national park,” said Wheatley.

Gagnon adds, “The rich soil in the cells accelerates the growth of the tree canopies so they will be raised above the business frontage –helping with visibility of the façade and signage — more quickly.”

Before the pavers could be laid, all utilities were replaced, starting with the water main, sanitary and storm sewers under the road. New streetlights were put in, and additional power was routed to the street to accommodate events and holiday lighting without the use of generators. There is power on every landscape pod as well as an electrical cabinet in the centre of the street.

“It was challenging; maintaining the lines within the tight parameters of the pattern required us to lay it by hand,” said JP Heroux, owner and president. This was the first time he had worked with the VS 5 paver and he had slight reservations about the groove on the bottom and the fact that they were slightly thicker pavers.

“I was concerned that this would be a problem in terms of running straight lines, but it turned out to be helpful. It also made the surface stronger because the stones are locked in place on five sides. I was sure that once a stone is locked in place it’s not moving and it will be able to withstand heavy vehicles.”

Hurlbut agreed it was a complex installation given the need for precision to keep the pavers in line with elements that were also built into the pattern such as drainage and concrete squares to hold bollards.

“I was impressed with the installers’ attention to detail. The final pattern was within millimetres of what I’d designed on the computer,” she said.

“It went fairly quickly for that amount of work. We installed 720 pallets of pavers, 46,848 square feet in total,” he said. “It’s a fantastic product. I can see that street being there in 50 years with the Belgard pavers. They were durable and nice to work with in a place where more than 5 million people a year will walk on it.

“Pedestrian traffic has already improved. We moved from a 5:1 ratio of pedestrians on Banff Avenue to those on Bear Street prior to the reconstruction to a 3.3:1 just through the first summer and fall after completion,” said Gagnon.

Wheatley has been happy to see how the different traffic has learned to share the space, too.

“We’ve noticed people are very confident walking down the centre of the street and drivers are very patiently waiting for them to get where they’re going. The cars also tend to drive down the centre of the road when they’re not avoiding people,” she said. “And, when they encounter an oncoming car, the drivers have to communicate with each other – make eye contact, slow down, shift more to the side of the road. It’s been really great to see it work so well.”