April
26, 2012, Barrie, ON – The
Ontario Hot Mix Producers Association held their annual Spring Operations
Seminar at Georgian College in Barrie on April 25th. With
a crowd of over 100 people from the paving industry on hand, the morning
sessions focused on technologies that are improving the quality and efficiency
of paving work in Ontario.

With
a crowd of over 100 people from the paving industry on hand, the morning
sessions focused on technologies that are improving the quality and efficiency
of paving work in Ontario.


Jamal
Mohammed of Sitech Mid-Canada Limited, a distributor for Trimble, introduced
the room to the benefits of 3D paving technology. Using the Trimble GCS900 UTS
system, contractors are eliminating issues during primary compaction caused by
dips in the road. The 3D solution helps create better smoothness on the road,
providing the contractor with a higher-quality end result. Adding the 3D system
to a current Trimble 2D system requires the addition of just 4 components to
the existing operation, making an upgrade easy. The CCS900 software component
allows supervisors to track pass counts, temperature mapping, and any other
quality control issues that can occur.

Another
technology helping creating efficiencies for paving work is the Topcon RTP-300
real time profiler. The unit, which attaches to any truck through the standard
tow hitch, allows contractors to do high-speed surveying of a road. The 3-laser
system provides information on smoothness and defects in the roads like bumps
and dips. The unit records the data at as little as one-inch intervals at
highway speeds.


Bill
Wilcox from Dynapac Canada discussed the use of chip spreaders for Stone Mastic
Asphalt. The wearing coarse, highway class asphalt has been used by the
Ministry of Transportation in Ontario to varying degrees since 2000. Wilcox
stated that MTO has suggested that it would like to have SMA on all 4+-lane
highways in the province within the next 4-5 years. The one challenge has been
to counter the traction issue caused by the bitumen coated stones used as part
of the mix. As a result, Dynapac has tested a 57” grit spreader using their
CC234 8-ton roller. After a series of tests, Dynapac was able to find a grit
compound and spread that increased skid resistance by 30%-60%. With at least
seven jobs released for 2012 by MTO that will require grit spreading, Dynapac
has introduced a 66” spreader for companies to use on these projects.


Night
paving was also an area of focus during the morning sessions at the Spring
Operations Seminar, both from a technology and safety standpoint.


In
terms of technology, the development of LED lighting solutions is creating
significant benefits over their fluorescent counterparts according to Josh
Hachey of Safety Warning Systems Inc. With a life expectancy 6-10 times greater
than fluorescent lighting, LED lights are greatly reducing the downtime caused
by the replacement of bulbs. The LED lighting solutions are also significantly
reducing issues caused by shadowing, as well as brighter lights for easier
detection of defects in the paving work.


Night-time
paving causes an array of challenges from a health and safety perspective. Jim
Lafontaine, Manager of Health and Safety for Dufferin Construction, spoke at
length about the issues created from working at night. As the ORBA’s
representative on the provincial health and safety committee for the
construction industry, Lafontaine was able to present a number of disturbing
near-miss, injury, and fatality statistics that plague the industry. Some of
those are created by a list of issues facing night work, including: fatigue,
language barriers, production pressures, inadequate training, and improper
tools. The presentation stressed the need for increased understanding of
machine operations, increased use of qualified signalmen, and better use of
safety signage on work sites.

The
morning session ended with an overview of the newest, latest, and greatest
technological advancements that were on display at the World of Asphalt in
Charlotte, North Carolina. For more information on that, check out the April
issue of Aggregates and Roadbuilding magazine.


The afternoon session began with an
in-depth discussion on studies done into paving temperature differentials. Led
by James Hedderich, Technical Marketing Specialist Paving Quality for MOBA
Corporation, the discussion focused on the Washington State study from the
1990’s that caused the push towards temperature testing for paving projects. As
a result of that study, the 25° differential has become the
industry norm, which has been reached in large part to the emergence of MTV’s.
As of today, 28 states require temperature testing, and the province of Quebec
has also implemented the 25° standard.
Can Ontario be far behind?

Using the PAVE-IR system, Hedderich demonstrated the testing and
tracking methods that MOBA has developed for use on job sites. Their high-tech
software allows pavers to see real-time data on the quality and consistency of
the temperature of the asphalt being laid.

The focal point of the day came with the final session, a series
of live product demonstrations and showcases of the newest equipment available
to paving contractors in Canada. 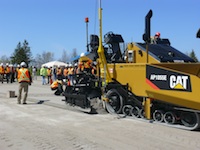 The primary demonstration involved proper plate sampling
techniques and the use of a splitter device for sample collection thanks to the
crew from K.J. Beamish Construction Co., Ltd. The demo involved using a Cat
AP1055E Paver from Toromont, mounted with the Trimble GCS900 3D Paving system.

Once the primary lane of gravel was laid, Bill Wilcox from Dynapac
Canada used a CC234HF with a hydraulic bucket attachment to demonstrate the grit
spreading technique as discussed during his presentation about SMA pavements. 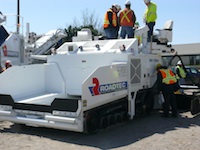 Among the equipment available in static displays around the yard
were two pieces of Roadtec equipment recently released at World of Asphalt in
Charlottle, North Carolina: the RP-195e Paver and the SB2500e Shuttle Buggy.
Those two machines are being distributed through a new company just opening its
doors in Ontario: HMA in Orangeville. We hope to have an official announcement
about their new business in the next few weeks.

Several other manufacturers had some of their newest paving
machines on display around the yard, including: Volvo, Hamm, John Deere,
Dynapac, Cat, BOMAG, and Weiler. Distributors were on hand to provide
information on the equipment that was on display, but much of the talk steered
towards what new equipment would be heading north of the border in the coming
months. With all of the major manufacturers releasing new products for the
industry, many of the attendees were eager to learn more about the newest products
emerging in the paving industry.

The OHMPA will now focus their attention on four Partners in Quality discussions being
held in various locations across the province. For more information, visit
www.ohmpa.org.