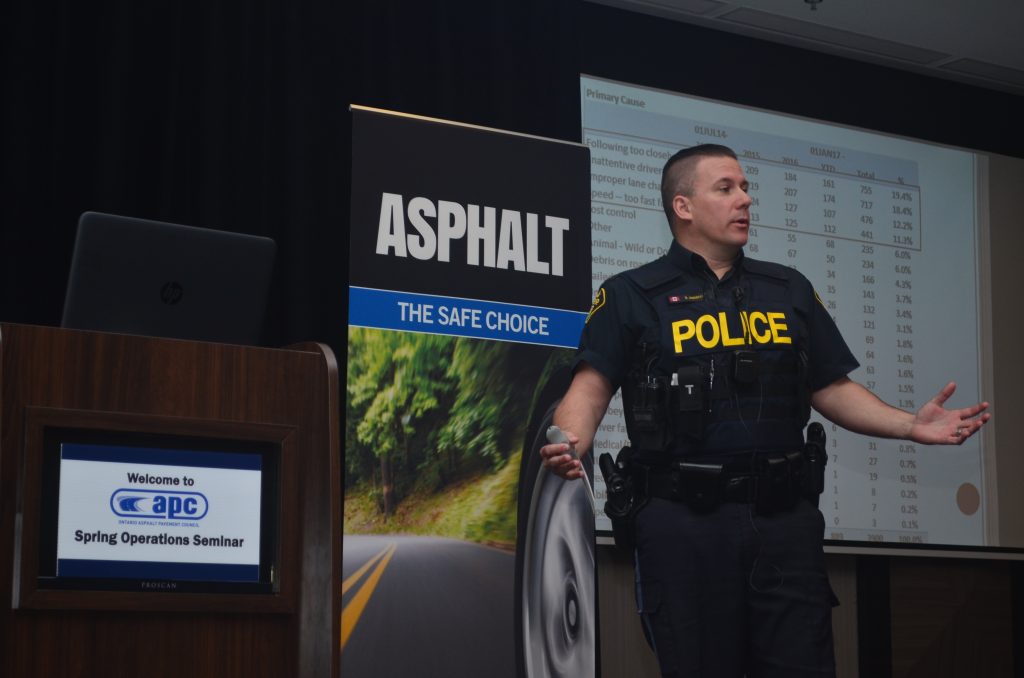 April 5, 2018 – Spring is here, and that means construction season is getting into full swing.

To help get Ontario’s road builders prepared for another busy season across the province, the Ontario Asphalt Pavement Council (OAPC) hosted its annual Spring Operations Seminar on April 5 at the Courtyard Marriott Mississauga West in Mississauga, Ont.

Approximately 150 industry professionals were in attendance for the day’s sessions, which kicked off with a presentation by Ontario Provincial Police (OPP) collision reconstruction expert Steve Anderson, who discussed work zone safety and shared statistics on reported incidents at construction jobsites across the province.

The most recent statistics Anderson shared were from 2016, which showed that the number of jobsite incidents reported to the OPP was down from 1,121 to 1,048, when compared to 2015.

Not surprisingly, the most common times for incidents were between 9 a.m. and 6 p.m., with the highest number of incidents occurring during prime construction season between June and September. Midnight to 4 a.m. was the time when the least number of reported incidents took place.

Martin said that the industry statistics are actually trending upwards in regards to incidents on jobsites, not down, but that could be due largely to incidents not being reported to the OPP. For the incident to be entered into the OPP’s statistics database, the reported incident must have caused injury, damage to an entry barrier, or damage to car that exceeds $2,000.

Changing colours
One way to improve visibility at worksites is to switch the colours being used for safety vests and tiger-striped barrier cones.

“The police switched from orange reflective vests to a high-visibility lime green colour… this was proven to be more effective [through studies], in not only visibility, but for what young drivers are responding to,” Anderson told the crowd, adding it is mainly older drivers that still recognize that the orange colour is associated with construction jobsites. “Newer drives are not making this correlation.”

Anderson added that fire departments are also beginning to adapt the lime green colour for the checker patterns on the back of fire trucks, because younger people recognize the colour for emergency vehicles better than the traditional red.

“Lime green has shown to be more reflective, more visible, and easier for people to pick up,” Anderson said.

Roll out new barrels
Anderson questioned the effectiveness of the traditional orange and black tiger-striped barrels that are used as barriers on jobsites.

“Why are they black?” he asked the crowd, noting that in less illuminated workplaces – like on Highway 400 up north – rain or any other factor that creates decreased visibility can make the barrels difficult to see.

One solution Anderson offered the crowd was to make the barrels lime green and white, like in some construction jobsites in Quebec, which allows both colours to be reflective.

“You shine a flashlight at the black stripes and they disappear, especially at night,” he said.

Anderson stressed the importance of collaboration with the industry to find solutions to increase jobsite safety for workers, drivers and police officers. Some examples he offered were better signage for drivers on jobsites, and completely shutting down sections of highways to get jobs done faster, while ensuring the safety of the workers on site and the drivers.