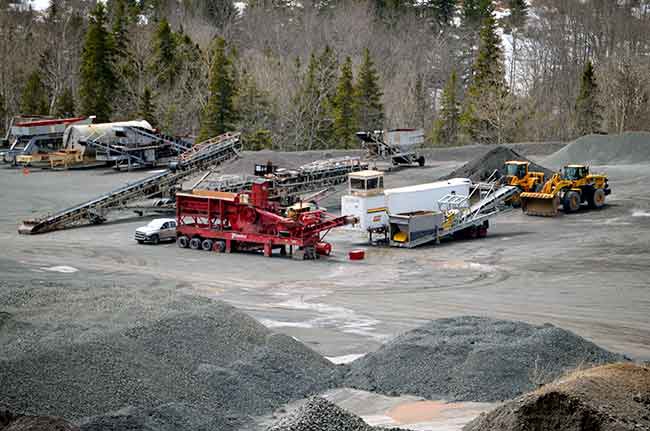 The MacLellan’s Brook quarry south of New Glasgow has the capacity to produce up to 750,000 tonnes of aggregates per year.

It was a grueling winter in Nova Scotia in 2014-15. As the late days of April approached, aggregate and road construction crews were finally working with conditions that would allow them to operate. Sure, road conditions were still soggy and weight restrictions remained in affect, but site prep work could finally begin and pits and quarries finally got in a position where stone could be crushed to create the stockpiles needed for customers and projects throughout the province.

In New Glasgow, located approximately 160km northwest of Halifax, Steve Weeks and the team from Weeks Construction were among the companies attempting to get operations up and running, getting gravel stockpiles ready for the road construction season. The company has four quarries and two pits scattered throughout Northern Nova Scotia that operate on a full-time basis, plus several other properties that provide local stockpiles when needed.

The company is also one of the province’s well-established road paving companies, and was the inaugural recipient of the Nova Scotia Asphalt User Producer Association Paving Crew of the Year Award given annually by NSUPA to a company dedicated to high-quality work in paving the province’s highways, roads, driveways and parking lots.

For Weeks, the beginning to the season is rushed, but the industry veteran has the support needed in order to successfully get the startup running.

Weeks Construction was formed in 1971 by Steve’s father, Scott, who opened the operation with three employees and a rubber tire backhoe. Scott had significant experience in the industry, having worked as a superintendent for many years with Tidewater Construction before starting his own company.

Since the beginning, Weeks Construction has always been a family affair. Steve joined Weeks Construction, alongside his sister Susan, in 1993. Steve graduated from the Technical University of Nova Scotia in 1991, the same university that Susan had received her degree in chemical engineering from. Steve’s youngest sister had already been working with the company, but left in order to raise a family. Even the family matriarch spent several years assisting in many roles, helping Scott get the company off the ground and running efficiently.

A few years after Steve and Susan joined the company in 1995, their father Scott passed away. D.J. Campbell, who had been with the company for 20 years, was named CEO. Seventeen years later in 2012, Steve was appointed president. Susan now serves as safety officer and also is a project manager, while Jennifer and Steve’s mother continues to serve the company, as members of the company’s Board of Directors.

Building Relationships
Keeping a family business strong for decades of growth means building solid relationships with the people closest to you. And it’s the same relationship building that has helped Weeks Construction keep its equipment running efficiently for many years.

Weeks was one of the first companies in Canada to purchase a Svedala (now Sandvik) H6000 Hydrocone crusher for its pit and quarry operations. The unit, purchased in the early 1990s, needed service and support during its life with Weeks, and that responsibility eventually fell to the team at Aggregate Equipment.

Based in nearby Truro, N.S., Aggregate Equipment was incorporated in 2001 as a supplier of crushing and screening to the aggregates industry. Sandvik is one of the primary companies whose product lines it supports, which is why it was imperative for Weeks and his team to build a relationship with the company.

“What they had to offer, above their competition, was that their primary focus was crushing and screening,” Weeks explains. “They weren’t loader and excavator guys who also sold crushers.”

That focus has reaped rewards for Weeks and his team, having a go-to resource within a short drive of many of the company’s pits and quarries, reducing the company’s downtime when equipment goes down and immediate repairs are necessary.

“Aggregate Equipment has always provided the knowledge from both an operations perspective and from a maintenance perspective that few others have been able to provide. We have called on them many times for parts, service or advice on how to improve our operation and they have never let us down. Having someone that we trust to work with allows us to focus on our operations.”

Coming off a winter that proved challenging for even the strongest companies, the ability to let someone address one of your significant needs is incredibly helpful.

Sandvik, Superior and Powerscreen equipment can be found throughout the company’s multiple sites, which are the three primary companies that Aggregate Equipment provides sales and service for. They have also taken trade-in equipment, some of which has also ended up at Weeks’ pits and quarries.

At Weeks’ primary quarry, the MacLellan’s Brook Quarry south of New Glasgow, some of the equipment from AE can be found, alongside wheel loaders and excavators from both Caterpillar and Komatsu. The quarry also features a batch plant for producing asphalt for road crews in the region. There are also two Jeffrey feeders with a maximum capability of processing around 800 tonnes per hour, but run at about half that capacity most of the time. In total, the MacLellan’s Brook quarry produces anywhere from 300,000 to 750,000 tonnes of the company’s approximate 1.5 million tonnes of aggregate products in any given year depending on regional demand for materials. For paving gear, the company primarily relies on Roadtec (also sold and serviced by Aggregate Equipment), which it is has success with for several years.

The MacLellan’s Brook quarry south of New Glasgow has the capacity to produce up to 750,000 tonnes of aggregates per year.

Operation Challenges
Like many construction and forestry businesses in Nova Scotia, the main challenge facing the company is the need for new skilled labourers.

“Finding quality people is always the most difficult challenge we face,” Weeks says. “Because things have been particularly competitive for the last several years, we are trying to do more with less. This means we have to ask for more from all of our people if we are to continue to improve. Not necessarily working harder, but using their experience and knowledge to work smarter.”

Weeks currently has many long-term employees that are a big part of our success, with four at 40 years and eighteen at 25 years with the company. But those same workers will be looking to retire in the near future.

Weeks understands that part of the reason for the shortage in skilled labour is due to the working conditions that a career in heavy construction commands. Less and less young workers are comfortable with the demands of the job, which can obviously cause strain on young families.

“Working in construction also means long hours and spending time away from home,” Weeks says. “It is very difficult to find younger people that want to live this lifestyle.”

Thanks to a strong work ethic, a family that is savvy in the inner workings of the heavy construction industry, and a strong relationship with one if its key suppliers, Weeks Construction has built an aggregates and road construction business that is built to overcome any challenges it faces.