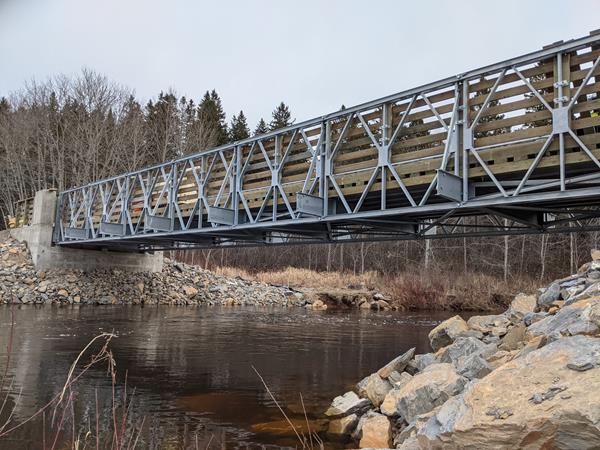 Acrow, an international bridge engineering and supply company, recently designed and supplied a modular steel bridge for a vital crossing point on a popular section of the Province of New Brunswick’s (N.B.) recreational trail network near the Village of Plaster Rock, N.B.

Located at the northern end of the Appalachian Mountain Range, the region is a year-round destination for outdoor activities. With more than 8,000 kilometers of groomed trails across the province, snowmobiling is a vital part of the region’s economy.

A need for change

In the spring of 2019, an ice jam in the Tobique River caused the adjoining and smaller Odell River to back up. As a result, large sections of ice pushed the existing bridge off of its foundations.

As the bridge was on a snowmobile trail and critical for crossing the Odell, the owners of the bridge, New Brunswick’s Department of Energy and Resources (NBDERD), looked for a long-term solution and decided it would be quicker and more economical to completely remove the old structure, rebuild the foundations, and install a new bridge.

Once the structure had been selected, design engineers Hilcon Limited, devised innovative foundations. This allows for the bridge to be lifted in the event of future backups, thereby preventing it from being pushed out of position.

A key design feature of the new bridge are specially modified transoms allowing for up and down but not lateral movement, enabling the bridge to slide up the sides of the extended curtain walls in high water, and slide back down when the water level has dropped.

The new bridge replacement, manufactured from high-strength, high-quality galvanized steel, is 21.3 meters long and 3.7 meters wide to accommodate two lanes of snowmobiles or one groomer.

“Acrow’s modular components allowed for easy transport of the structure to the remote job site,” said Benoit Forget P. Eng, business development manager Quebec/New Brunswick. “The bridge was quickly assembled and launched with the timber deck, saving both time and money over other bridge types.”

The project began in October 2020 and was completed in only a few weeks, rapidly restoring the crossing for the snowmobilers just in time for the first snowfall of the year.