January 4, 2013
By Aggregates and Roadbuilding

January 4, 2013By Aggregates and Roadbuilding 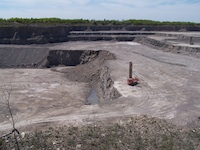 In the materials production industry,
you’d be hard-pressed to find a piece of equipment that works as hard as a
vibrating screen. Every day – and oftentimes, 24-hours a day – ton after ton of
material is dumped on them, as their shafts turn and bearings drive. Although
they endure tough working conditions, they’re still held to the highest
standards, and expected to produce a clean, properly sized product every
time.

In the materials production industry,
you’d be hard-pressed to find a piece of equipment that works as hard as a
vibrating screen. Every day – and oftentimes, 24-hours a day – ton after ton of
material is dumped on them, as their shafts turn and bearings drive. Although
they endure tough working conditions, they’re still held to the highest
standards, and expected to produce a clean, properly sized product every
time.

It’s with good reason this equipment is
held to such a high standard. Responsible for the primary material production
tasks, one could argue vibrating screens are the heart of every processing
operation. They can be the difference between productive and profitable uptime
or detrimental and costly downtime. One quarry located in the township of
Presque Isle, Mich., adjacent to Lake Huron, would certainly attest to the
impact that equipment, particularly vibrating screens, can have on an
operation.

Acquired in 2000 by Paris-based Lafarge
Corporation, the Lafarge Presque Isle (PI) quarry is one of nearly 1,600
worldwide production sites under the Lafarge umbrella. As
a leading materials producer in the U.S., offering everything from standard
construction and asphalt stone to unique high calcium limestone (HCL), the PI
quarry relies on the heart of its operation to ensure uptime remains high. For
PI, this heartbeat comes from a fleet of 14 F-Class vibrating screens from W.S.
Tyler, which operates on a 24-hours-a-day, five-days-a-week schedule.

To say the equipment has been crucial to
the company’s success is certainly a strong statement — and one
backed by solid numbers. In just over a decade, PI has become the largest
producer in Lafarge North America’s family, consistently averaging more than
2,400 tons per hour, and an average annual production of nearly 8 million tons
per year.

The PI quarry isn’t an ordinary
operation, and didn’t get to where it is by accident. Rather, the entire team,
from the maintenance staff to management, goes beyond ordinary and gives large
doses of extraordinary. This is evident in both day-to-day operations, as well
as long-term strategy. A prime example of PI’s tactical planning approach took
place back in 2002, when it was going through a scheduled upgrade of its
vibrating screen equipment. It was at this time the new fleet of F-Class
machines was purchased – but it wasn’t a simple decision based solely on the
typical criteria of tonnage output, high production or speed. While Dave
Nelson, PI’s manager, did have specific and high expectations for the machines’
performance, the real deciding factor was based on something that wouldn’t be
measured by standard production benchmarks.

Multi-story screen houses are quite
common in the industry. Combine their size, capacity and force
with the inherent function of a vibrating screen – to vibrate – and it’s easy
to see that a resulting side effect can be transmitting vibration back into the
structure, resulting in major structural concerns for a multi-story building. The
intrinsic vibration concerns often result in limitations on the placement of
screens within the structure, with a limited footprint per floor. The
combination of logistical factors can make screen selection quite complex – exactly
the case for the PI quarry. Because his operation utilizes a six-story screen
house, with machines on the second, third and fourth floors, both vibration
concerns and a limited footprint were paramount considerations in Nelson’s
decision.

Beyond logistics, Nelson had specific
goals he wanted to achieve with the new machines. One key
goal: improving efficiency in load rates, particularly conveyor load rates.
Because of its proximity to Lake Huron, the PI quarry transports material by
water, and utilizes conveyors to load the shipping vessels. Especially with
rising fuel costs in recent years, Nelson points out the distinct advantage
PI’s location offers over its competitors.

“Land-based producers typically only
serve customers within a 100 mile radius or less. Our location grants us the
advantage of waterway transport, and allows us to expand our market reach
hundreds, even thousands of miles and into multiple states.”

While the expanded reach has given PI a distinct
competitive edge, what wasn’t helping it were less-than-adequate loading rates.
Nelson says the conveyors are capable of carrying 4,500 tons per hour, but during
the upgrade planning and operation assessment, it was found they were nowhere
near close to maximum efficiency. In fact, he estimates they were sometimes
loading as little as 800 tons per hour or less, depending on material.


“To say we were underutilizing our load out facility is an understatement,” he said. This made it
crucial for the company’s vibrating screen selection to offer
enhanced performance. It required more than trading up to a newer model.
Additionally, increased efficiency didn’t equal greater tonnage output or even
faster operation, so it wasn’t going to be as simple as machines bigger in size
and production capabilities either. And the final choice couldn’t leave out the
most important factor – structural concerns.

First, a precise analysis of the screen
house’s structural integrity was needed. A professional structural analysis was
conducted by a local engineering company, and Skaluba was left with two
options: Choose a fleet that would transmit minimal vibration into the
structure, or require significant infrastructure changes to the existing screen
house, to accommodate added vibration. The latter wasn’t an option in Skaluba’s
mind, so after sharing the structural analysis results with Nelson, the two
began looking into options.

Two-bearing configurations, a common
design in the vibrating screen world, don’t produce a consistent stroke – one
of the hallmarks of four-bearing, eccentric shaft designs. This means excessive
vibration transmitted back into the structure. With that option ruled
out,
the two were hoping to find a four-bearing machine large enough to meet
efficiency expectations that would also, and most importantly, fit logistical
needs. They were pleased to learn that W.S. Tyler had the answer to meet both
demands: The four-bearing F-Class vibrating screen.

Featuring advanced, double eccentric
shaft technology, the F-Class screens produce a constant, positive stroke that
handles material volume spikes without losing momentum. As the eccentric shaft
turns, the screen body is forced to follow the shaft movement. While it travels
upward, the counterbalance weights move in the opposite direction and create an
equal force to that generated by the body. As a result, the forces cancel each
other, allowing a dynamically balanced system that transmits minimal to no
vibrations into the structure, and enables optimum production and reduced
CAPEX.

Nelson and Skaluba purchased a new fleet
of 14 machines. The units were of slightly varying sizes, based on the location
within the screen house, and broke out as follows:

Though no additional vibration would be
transmitted into the structure, the upgrade did require minimal structural
reinforcement to accommodate the larger equipment. The impact of the new F-Class
machines though? Anything but minimal.

PI increased screening area by 60
percent, while staying within the designated footprint and vibration
limitations. The biggest impact however, was realized in Nelson’s primary goal
– efficiency. Nelson says he and Skaluba were able to measure a difference
within the first year.

“Probably the most dramatic example of
this increase was what we saw in our one-inch minus material,” Nelson said.
“Our loading rate increased by 50 percent.”

While the one-inch minus material was the
clear leader in terms of increased efficiency, Nelson says the company saw
about a 15 percent increase in overall load rates within the first year.

The F-Class machines have been Presque
Isle’s workhorses for the past 10 years, and Nelson expects them to last at
least another decade. The longevity is especially remarkable to him because, as
he puts it, “They’ve gone through 10 years of nearly 8-million tons per year in
production. Do the math, now that’s impressive.”

Often, all that separates ordinary from
extraordinary is that little “extra”. Lafarge Presque Isle has taken every key
component of success, from world-class maintenance to strategic planning, and sprinkled
it with enough extra to go far beyond ordinary, and become the leading producer
it is today.