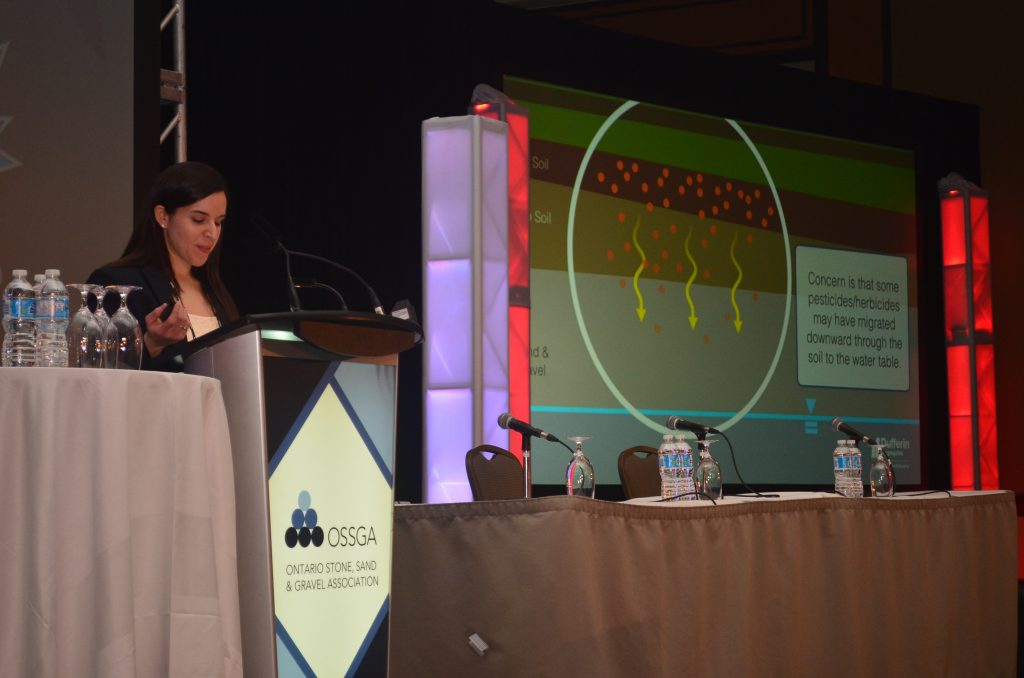 CRH Canada Group’s environment manager Maria Topalovic discussed managing water tables and species at risk during the 2017 OSSGA AGM and conference in Ottawa, which took place from Feb. 15 to 17 in Ottawa.

February 17, 2017 – CRH Canada Group’s environment manager Maria Topalovic discussed managing water tables and species at risk during the 2017 OSSGA AGM and conference in Ottawa, which took place from Feb. 15 to 17 in Ottawa.

Dufferin Aggregates – Paris Pit
At the Paris, Ont. aggregates pit, licensed in 1974, the prior use for the land was agriculture. There was concern that pesticides and herbicides could migrate through the soil down into the water table during aggregate washing activities, progressive and final rehabilitation – specifically atrazine leeching into the water table.

At the time of the concerns, the majority of the operation was taking place in the wellhead protection area  (WHPA). In addition to monitoring pesticide and herbicide levels in the water, Dufferin Aggregates also moved various aspects of its operations away from the WHPA as part of its contamination prevention methods, such as its fuel storage area, for example.

“We can find solutions and provide that local resource [while ensuring environment is protected],” Topalovic told the crowd.

Dufferin Aggregates – Mill Creek Pit
At the Mill Creek Pit, concerns were raised that below water extraction in its operations could potentially impact the local trout habitats. Since ponds can occur in the below water extraction process, there is the potential for the surface area of the water to increase, creating changing water levels; which generates concerns related to water level impacts and thermal impacts.

Groundwater upwelling was occurring in a trout spawning area, so the company continues to keep a vigialnt count on the number of trout to ensure the population level of the species is not being impacted by Dufferin’s operations.

“So far our monitoring results have been very good,” Topalovic said, adding that trout spawning activity has been monitored for 21 years and that the population numbers each year have either been consistent or increased.

Dufferin Aggregates – Milton Quarry Rehabilitation
At the company’s Milton Quarry, the main concern was whether quarry dewatering operations were impacting the local watershed, potentially leading to domestic drought of nearby wells and a negative impact on the local salamander population.

A water management system was put in place to manage these concerns, which included the installation of recharge wells, which push back surface water into the groundwater system; as well as a drift fence that was used to intercept some of the local salamander population for the purpose of the daily monitoring of the species. One of the local species is the Jefferson salamander, which was placed on the endangered species list in 2011.

Topalovic ended her session by stating the main message that she hoped the crowd would take away from her presentation.

“All of our aggregate sites face challenges,” she said. “But we can find sustainable solutions and leave behind this lasting legacy.”