Working to build infrastructure in the heart of Ontario’s cottage country. 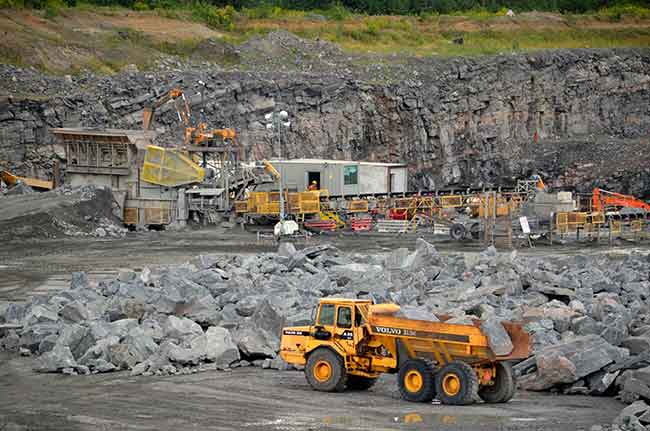 Building roads and mining aggregates in the middle of cottage country is not without its advantages. There are pristine lakes to boat, fish and swim on in the summer, and perfect conditions for ice fishing, cross country skiing and snowmobiling in the winter.

But for Muskoka’s largest construction company, Fowler Construction, the things that make the region so ideal for vacationers from all over the globe are some of the same reasons that make running a business that much more difficult.

In the beginning
Three friends Archie Fowler, Glen Coates and Ralph Boothby founded Fowler Construction in 1949, originally with a foundation in forestry. A short time before the company was incorporated, Archie Fowler passed away in a tragic accident. The other two partners then named the business after Fowler as a way to honour the memory of their friend.

As the forestry business slowed, the company made the transition to construction, the business that has become the foundation for the company’s growth. Fowler has been heavily involved in most major construction projects throughout the Muskoka Region, including most major resorts, golf courses, hotels, and municipal and provincials roads and highways. Fowler also managed and built all of the security fencing and structures during the G8 summit in Huntsville in 2010. The company also has done a large amount of winter maintenance throughout the province, including a 35-year span doing maintenance and snow removal for the City of Toronto.

Throughout the nearly seven decades in business, Fowler has continuously expanded to the point where it now has 27 licensed pits and quarries, a large road construction business, a winter maintenance sector, a landscaping division and a thriving sport court division. The pits and quarries range from the eastern shores of Georgian Bay east to Bancroft, south to Orillia and north nearing Sudbury. In total, the company is producing aggregates from over 30 sites at any given time in order to provide aggregates for its customers and its own construction sites close to where the product is needed.

Of the 27 pits and quarries that are licensed to Fowler, only one is a limestone quarry. The rest are granite quarries and sand and gravel pits, producing a wide variety of products.

Fowler is the largest supplier of construction aggregates in the Muskoka area. Many of its smaller quarries service local markets only, but several of its quarries produce more than half a million tonnes annually. These sites produce standard construction materials, as well as specialty asphalt products for Fowler’s growing customer base, which expands south throughout the Greater Toronto and Hamilton areas, as well as into the north beyond Sudbury and North Bay.

Maintaining the fleet
One difficulty with having operations spread throughout a wide geographic range is the ability to maintain equipment. The ability to troubleshoot problems is imperative to reducing downtime, especially knowing that it could very well take several hours or even a few days before a technician can reach your location.

Operations Manager James Gordon and his team have worked diligently to try and keep a strong skill set at sites throughout the expansive operation. For example, the company has several highly skilled staff including welders, mechanics and electricians, working at several of the company’s 27 licensed sites. Having those employees available is imperative, giving the company the ability to troubleshoot problems much quicker, provide proactive maintenance on equipment and fabricate customized equipment on site.

“We manufacture many of our own components and perform our own repairs so that we can keep that skill set in-house and keep those employees busy throughout the year,” says materials manager James Gordon.

In the winter, Gordon and his team will build components for the upcoming year, which allows Fowler to keep some of its skilled labourers working year-round.

Fowler finds similar benefits from keeping information technology professionals on its staff, especially for the mobile components of its fleet. Heavy equipment used at the aggregate operations and on road construction sites, scales at the pits and quarries, and its fleet of mobile crushing and screening equipment demands troubleshooting involving computerized equipment. With its own information technology specialists on staff, scattered throughout the geographical area of its operations, the company is able to quickly resolve issues rather than call for a service technician or sit in queue for hours or days at a time.

“We have a few suppliers that are closer than others,” Gordon explains. “But we do try to do a lot of in-house repairs.”

There are a few equipment suppliers with branches scattered throughout the region or within close proximity, especially OEM suppliers like Toromont, Strongco and Wajax, as well as some regional suppliers that have offices in and around the GTA.

Having that ability to keep so much of the repair work in-house, keeping members of the staff busy throughout the year, provides financial savings for the company and full-year employment for several members of the team.

Industry challenges
Fowler is not immune to the major issues that are plaguing the industry as a whole, despite being in a part of the country that offers a much different lifestyle.

“It’s growing increasingly hard to find employees,” explains Moreen Miller, president of Fowler Construction. “We have a workforce that works full time from April to December. On the aggregates side, we have a couple of plants that run year round. But otherwise, we are a seasonal business.”

Recognizing that finding employees is, and will continue to be, a constant issue facing the company, Fowler has taken steps to attempt to alleviate the problem as much as possible.

Part of the problem also comes from a longstanding shift away from skilled trades education in Ontario. For years, students have steered away from the trades, and educational opportunities to gain exposure to the industry have diminished.

“Getting people to come into the construction and aggregates business is a huge problem,” Miller says. “There are less people looking at the trades as a career; less and less every year.”

For its part, Fowler has introduced a new mentoring program to try and ensure it can retain the employees, both young and old, that come to work for the construction company. The company is reaching out to each employee to find out if there is another job they would like to learn or may be interested in transitioning into, and they are then paired with a mentor who can expose them to that part of the business.  “We think our new mentoring program will help us keep our employees interested and keep them learning new jobs,” Miller explains. “We hope this might be part of getting employees to plan to stay in the construction industry long-term. There are interesting and challenging jobs in construction; companies like Fowler need great people to fill the jobs”

With the continuing population shift from rural communities to bigger urban centres, there is also the issue of getting employees to settle in the region where Fowler’s base of operations is located. It is the perfect setting for anyone who enjoys spending time outdoors, but the intrigue and allure of the big city, Toronto, is just two hours down the road from the company’s head office in Bracebridge.

Unexpected challenges
You would think that, in the middle of cottage country, community efforts to stop quarrying activities would be greater than other regions of the country. But according to Gordon, Fowler instead contends with some issues that are specific to the region.

“One of the challenges here is traffic,” Gordon says. “We get the cottage and tourist traffic. So for a short time of the year, we’re really congested and then the rest of the year we don’t have any traffic issues.”

There is also the issue of material costs. Because most of the materials it produces are granitic, rather than limestone, there is an increased cost for material production, which increases the overall cost of any construction project.

But as Miller explains, the company has one unique regional challenge that has been difficult, at times, to manage.

“It’s a little known fact that in most cases you can’t pave on provincial highways in Muskoka past noon on Fridays,” Miller says. “There is also very limited nighttime paving allowed.”

Miller explained that there are logistics advantages to consider for nighttime paving certainly, like the availability of hauling trucks, but it is also a quality of life issue for its employees. Giving road construction crews the opportunity to work some nights would allow those employees to further enjoy some of the benefits of being in the region in the summer, whether it’s spending time on the water or enjoying the many trails and hiking routes scattered throughout the landscape.

In addition to the benefits to the company, Miller believes there are also tangible benefits to the region; removing the company from the roadways during the daytime would improve traffic flow throughout the region. However, the company has yet to convince stakeholders at the municipal and provincial level to fully re-visit the issue, something Miller hopes will change in the next few years, especially now that nighttime paving has become such a widely accepted practice throughout the province.

As the company looks for new ways to attract young, skilled workers to the region, it hopes the resolution of the regional issues it faces could help to provide the long-term sustainability that the company is so desperately looking for, much like the rest of the heavy construction industry.