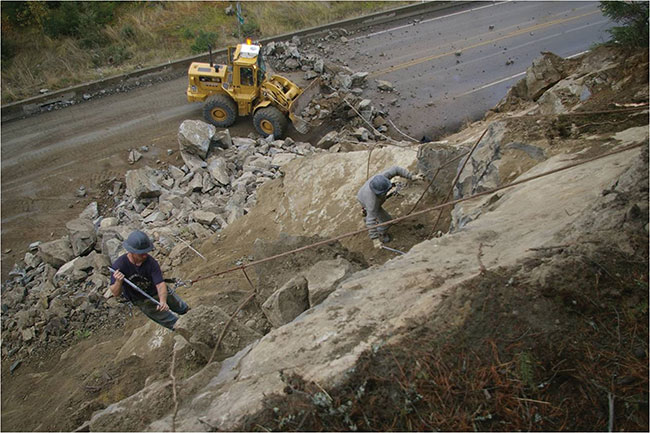 Workers called rock scalers use pry bars to remove loose rock and material that presents a hazard to traffic. Scalers also clean off any residual material left on a slope after blasting. Photos are courtesy of B.C. Ministry of Transportation

Rockfalls are a continuous and ever-present danger on many roads in British Columbia due to the mountainous nature of the land. They can cause delays, damage and even death – such as in 1982 when a rock fell on a vehicle in the Argillite Cut on Highway 99 south of Squamish, killing a woman and disabling her father.

With transportation corridors through such bouldered terrain, there’s always the threat of rocks breaking loose and tumbling down the slopes onto highways. As a result, the hilly grades require
constant vigil.

The B.C. Ministry of Transportation and Infrastructure’s (TranBC) Rockwork Program – a team of three engineers, two project managers and two technicians – is in charge of inspecting the slopes year-round and keeping the roads clear of boulders and other debris that might cascade down from the mountainsides.

With thousands of kilometres of roads and approximately 21,000 slopes along major roadways, it’s a busy job.

“It is interesting and challenging work that gets you outdoors in all parts of B.C.,” says Mike Dowdle, a geological engineer and manager of rockwork engineering with TranBC. “As long as there are mountains and gravity there will be rockfall activity to deal with, so it can seem to be a never-ending type of job.”

In a typical year, the province will have roughly 1,600 rockfall events.

“Rockfall activity is highly weather dependent and frequency will change from year to year in response to annual weather patterns,” notes Dowdle.

Spring is usually the busiest time on the calendar, largely due to changing weather conditions at that time of the year in B.C., says Dowdle, and March is typically the most active month for rockfall activity, when slopes are thawing from the winter and freeze/thaw cycles are occurring along with high levels of rainfall.

“Most rockfall events are relatively small and are easily cleared from the highway,” he says. “For larger rockfall events, ministry geotechnical engineers perform slope assessments to determine the source of the rockfall and evaluate if stabilization measures will be required.”

Each rockfall event is unique and has its own challenges.

“The majority of rockfall events do not require further follow-up stabilization work and the debris is simply cleared off the road,” says Dowdle. “Other times there may be a residual hazard like loose rock hung up on the slope that did not come down with the original rockfall. In those situations, we have to bring in rock scalers to remove the loose rock so we can safely clean up the highway and get traffic flowing again.”

Highway maintenance contractors clear rockfalls that reach travelled lanes of a highway. The contractors report the location and details of the rockfall event and TranBC engineers collect the information. They use it to monitor rockfall activity locations and trends throughout the highway system.

For larger rockfall events, ministry geotechnical engineers perform slope assessments to determine the source of the rockfall and evaluate if there are impacts to the slope that may require additional stabilization measures. If such measures are needed, specialized slope-stabilization contractors are brought in.

“When rockfalls occur on high traffic volume corridors it adds urgency to resolving the situation as quickly and as safely as possible, as we know delays or closures on these corridors affect many people getting to where they need to go,” says Dowdle.

Once safe to do so, highway maintenance contractors clear the debris from the highway using heavy equipment.

The boulder buster is one tool in the kit used to break up rocks that are too large for heavy equipment to move. The device does not use explosives. A hole is drilled in the boulder and filled with water and a boulder buster device is inserted. On firing the cartridge, a powerful pressure wave is created that travels through the water in the form of a hydrostatic pulse which causes the rock to fracture and break.

In January 2015, a seven-by-seven-foot rock was blasted into moveable pieces by crews on Highway 12 at the village of Lytton using a boulder buster.

Throughout the year, TranBC uses a variety of methods to protect the public from rock slides.

Workers doing trim blasting along the Sea to Sky Highway in B.C. Trim blasting involves the removal of rock using closely-spaced drill holes loaded with explosives. Generally the holes are drilled by workers suspended from ropes using hand held drills called “pluggers” but drilling may also be conducted out of cranes or man-lifts with larger drills.

Once sites have been selected as candidates for slope-stabilization work, engineers develop site specific designs to stabilize the slope and reduce the rockfall-hazard potential.

With rock scaling, experienced scalers rappel down a slope and use pry bars to remove loose rock and material that presents a hazard to traffic. Scalers also clean off any residual material left on a slope after blasting.

When trim blasting is required, workers suspended by ropes use handheld drills called “pluggers” to bore holes into the slope and fill them with explosives to remove the rock. Drilling can also be conducted by workers on cranes or man-lifts.

With rock bolting, steel bars are cemented in drill holes in large blocks and and anchored to more intact rocks behind.

Slope mesh can be used to direct small rocks into a highway ditch and rockfall fences can be used to act as barriers to prevent rocks from reaching a roadway. The fences are constructed using steel posts and steel net panels and are designed to be flexible. The net panels can deflect several metres to absorb the impact of falling or rolling rocks.

Pneumatically applied, fibre-reinforced concrete, or shotcrete, is another method used by crews to provide support to loose and fractured rock. The concrete is delivered by truck to the site and then placed in a pump and sprayed using compressed air onto the rock slope.

Dowdle says the approach and type of stabilization measure used varies depending on the situation and proximity to other infrastructure such as utilities, railways and other structures.

“The challenge of removing loose rock from a slope is made more challenging by the fact that highway corridors are also shared with other infrastructure such as power lines, fibre optic lines and railways,” he says. “Work must be co-ordinated with other agencies and it sometimes requires additional protective measures to prevent damage.”