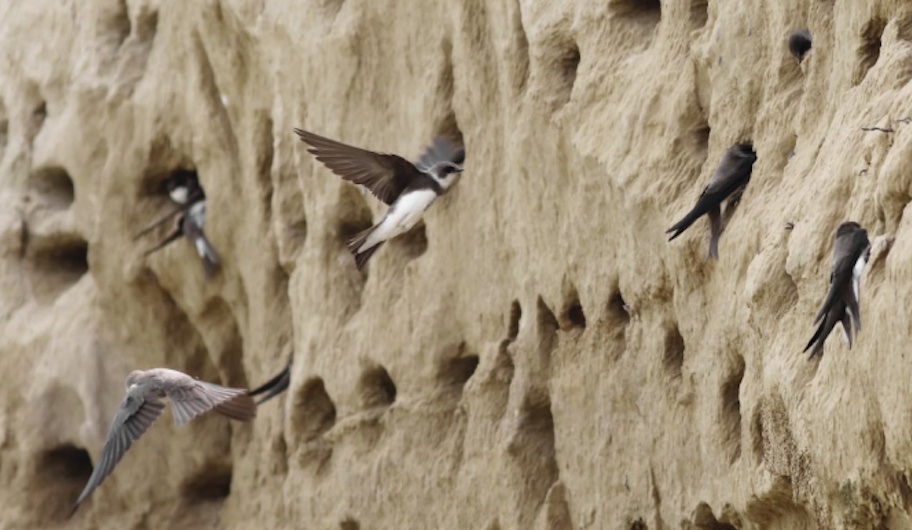 Navigating this threatened species in pits and quarries

Bank swallows in pits and quarries. Do you dig it?

WHAT ARE BANK SWALLOWS?

Bank swallows are small birds that feed entirely on insects they catch while flying. They have brown upperparts and white underparts with a large brown band across the upper chest. They breed in Canada during our summer months (May to late August) and fly to South America during winter. For nesting, bank swallows dig burrows about 65-cm deep into loose substrate embankments with a near vertical face (70 degrees or more) along ocean coasts, lakes, streams, rivers, and wetlands. They will also nest in human-created habitats such as piles and cut faces in aggregate pits and quarries. Bank swallows are colony nesters with colony sizes ranging from a few individuals to several thousand nesting at one colony. They often return to the same nest site year after year.

WHY ARE THEY DECLINING?

The reasons for declining bank swallow populations are still being researched, but some of the main pressures bank swallows face include the global decline of insects, habitat loss, and climate change. Loss of breeding habitat happens as coastal and inland waterbody banks are covered in rock (rock armouring), overly eroded during the summer, or developed. Artificial slopes (pits and quarries, road banks) provide another potential habitat to this species when there is no summer disturbance. Due to their decline, bank swallows are considered “Threatened” under the federal Species at Risk Act and are protected under the Migratory Birds Convention Act. Under these acts, individual birds, nests, and eggs are protected.

During the breeding season (mid-April to late-August):

In active work areas, you can:

If a colony establishes in an active work area, you must stop excavation work in that area and cannot use scaring devices at this point. What you can do is: 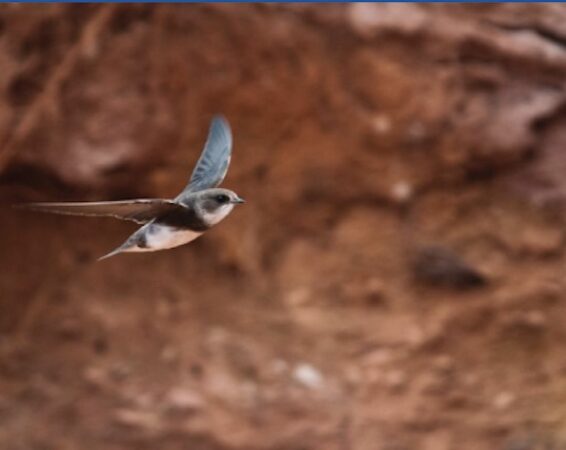 Artificial slopes (pits and quarries, road banks) provide a potential habitat to this
species when there is no summer disturbance. Photo courtesy of Birds Canada

You can excavate the nesting site at the end of the breeding season, after all the birds have left. However, bank swallows will often return to the same nesting site year after year, so we encourage you to provide alternative habitats in inactive work areas the following year by creating piles with a slope of at least 70 degrees.

If your operation is closing and the piles that bank swallows use are still in good condition and do not pose a safety issue, please consider leaving them for future breeding seasons. If you are obligated to rehabilitate your land, we suggest discussing leaving bank swallow habitat with the permitting authority.

Bank swallows are an important part of our natural world. They provide direct benefits to you by eating pest insects that can carry diseases, harm crops, and annoy us during our outdoor experiences.