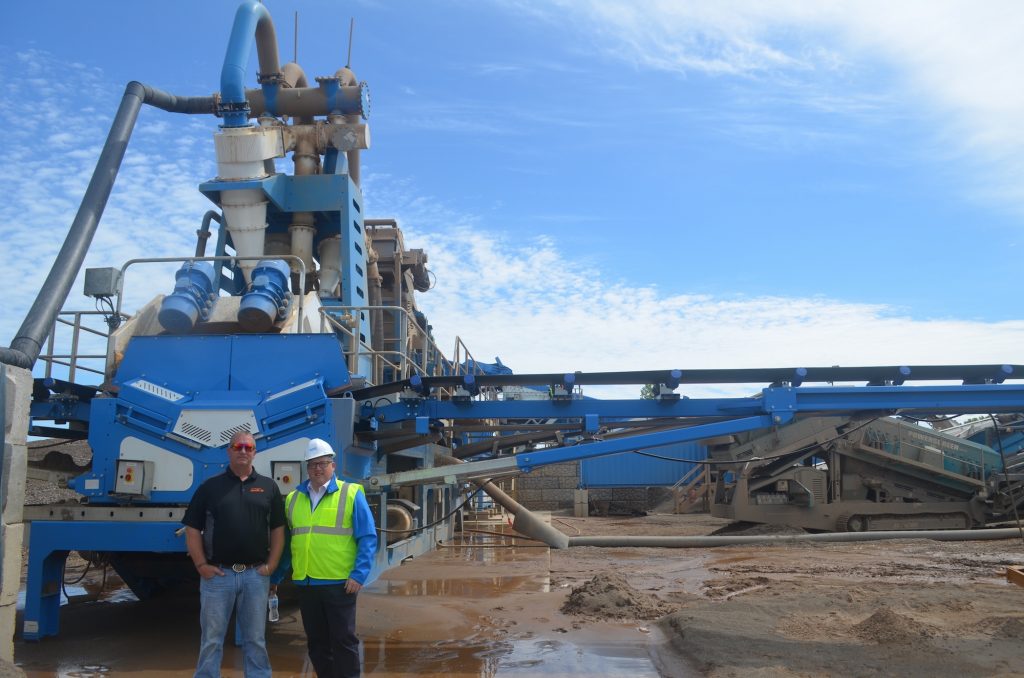 Since starting up, Lindsey Aggregates has often thought about getting into the washing side of the aggregates business. The family-run operation has been crushing and dry screening rock and aggregates products from its 1,000 acres of mineable materials at its quarries in Fulton and Oswego, N.Y. since opening up shop in 1999.

This year he decided to pull the trigger and looked into a variety of suppliers to find the right fit for his operation. In the end, Warren opted for a CDE R2500 wet screening module, and M2500 and M4500 modular washing plants with an integrated EvoWash sand washing plant.

The reason Vandish decided to invest in the washing side now is because he sees a lot of opportunity for his materials for use in N.Y. State road maintenance and construction contracts.

“All of material is high friction,” he explains. “The State requires contractors use high friction on certain jobs. I’m glad we did it. CDE has been nice to work with.”

“The nicest part is I can make them all in one pass,” Vandish says.

Despite the harsh winters that come with operating in upstate New York, Lindsey Aggregates crushes all-year-round.

“The winter months you may come in at 5 a.m. and not crush until noon, but we do it. It keeps us busy and brings in income,” Vandish says. “We also do snow plowing for the local nuclear facility.”

Helpful to the CORE
One interesting technology recently released by CDE is the company’s CORE Parts Assist. This allows CDE’s customers to access 3D images of the technologies they’ve purchased for the purpose of locating and identifying otherwise hard to find replacement parts, like a specific sized bolt on a piece of machinery.

Customers previously had to search through a paper manual and identify the right bolts and nuts for their equipment, which can be an aggravating experience according to Tom Houston, director of CustomCare for CDE, especially if they end up ordering the wrong parts. The new system allows users to zoom into 3D images of equipment and identify any piece of equipment by part number, all the way down to a single nut or a bolt. But that’s not the only advantage that comes with having these 3D images.

“They’re now using it not just for ordering parts, but for training as well,” Houston says. “We find customers love it. Every single part, every single screw is available, and the best part is it’s at the click of a mouse.”

Will this type of technology be a regular part of training and maintenance procedures in the future at aggregates operations everywhere? Houston thinks so.

“Whether people like it or not, it’s the future of where things are headed,” he says.

This kind of feature has the potential to be extremely helpful for companies like Lindsey Aggregates, which are focused on controlling costs and reducing downtime at its aggregate operations. Employees there are trained on how to maintain the equipment and do repairs, when necessary.

“If something breaks we fixt it ourselves,” Vandish says. “You have to if you want to keep running.”

Speaking of keeping things running, Vandish says he would be remiss if he did not acknowledge all the hard work of everyone on the team including his wife, Viriginia, who has been right by his side overseeing the administrative side of business since its inception.

“We couldn’t do what we do without everyone here on the team, including my wife, Virginia,” Vandish says.