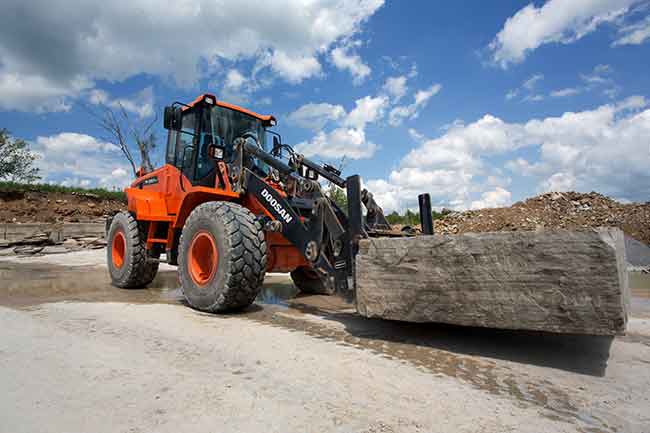 April 26, 2016 – Limestone has been in the ground for hundreds of millions of years and its use in building construction dates back at least to the pyramids in ancient Egypt.

These days, the limestone business is much different. The luxury of time to extract and fabricate is gone. The most successful firms need talented employees and productive, durable heavy equipment to meet demanding schedules and deliver high-quality products.

“Everyone looks for delivery speed,” says Tom Stobbe, owner (with his sister Linda) of Ledgerock Ltd., one of the most complete quarrying and fabricating firms in North America. “We have a hard time getting any kind of a long lead time. This applies more toward our dealer network side of the business, but is part of our architectural-driven custom work as well.”

Located on the Bruce Peninsula in southwestern Ontario, the company owns and operates three quarries that yield some of the world’s most spectacular limestone. Tom’s father, Harold, a homebuilder, purchased the land in the 1960s where the Owen Sound quarry is located.

“He had a friend who owned a quarry, so when home construction slowed down, he started buying land,” Stobbe says. “Good property was used for farming, but the rest was too rocky to grow anything so it was not very valuable. What many people did not realize was that a good band of stone ran through the area.”

A quarry is made up of multiple layers of stone. Some are thin — four-to-six inches thick — others are much thicker — up to three feet. Each layer has a unique texture and colour to it. Ledgerock is the leading producer of Eramosa marble/limestone, Algonquin limestone, Hope Bay limestone and Mara limestone.

The stone is removed with diamond belt saws that cut it into cubes. The cubes are removed using a Doosan wheel loader with a pallet fork attachment, and then either transported to the fabrication building (in the case of the Owen Sound quarry) or loaded onto trucks (at the Wiarton and Hope Bay quarries) for delivery to fabrication.

Removing and carrying the cubes of limestone has become more efficient since the company purchased a Doosan DL250TC-3 wheel loader. The “TC” stands for tool carrier, a parallel-lift arm, a wheel loader configuration designed for lift and carry applications. The 172-horsepower machine weighs 31,769 pounds and has a dump height of nine feet.

“The wheel loader’s parallel lift arms provide the operator with excellent visibility; you can actually see what the tips of the pallet forks are doing,” Stobbe says. “Picture a wall, four-to-five feet thick, with multiple layers that might be a foot apart. To remove the cubes, you need to exert a little force to break them apart, so proper positioning of the forks is critical. If you cannot see the tips of the forks, it makes it very difficult.

“The machine keeps the pallet forks and the material level, which means there is one less function the operator has to perform. It is very helpful.”

Along with the parallel-lift-arm design, the Doosan wheel loader’s limited-slip differential helps ensure a steady operation on uneven terrain. In fact, says Stobbe, “the ground from the quarry to the fabrication building is rough, with a lot of sharp stones. The DL250TC-3 does a nice job of keeping the load level.”

Another popular wheel loader feature is the ability for the operator to change attachments quickly and easily using the hydraulic quick coupler.

“We change between pallet forks and buckets frequently,” Stobbe says. “After the blocks are removed with the forks, there is some cleanup required because they all do not come out as a solid piece. A cube that is cut to size may fall apart if it is fractured. So, being able to efficiently switch to the bucket for picking up the broken pieces is important.”

Fabricating quality products
The next stop for the cubes is Ledgerock’s fabrication shop, a building that is well over 100,000 square feet. Plenty of new technology is evident throughout the plant. Ten CNC (Computer Numerical Control) machines produce a wide variety of stone shapes and sizes. Five of the units are set up as milling centres, where a computer-aided design turns out a computer-aided final product.

The quarries are closed from October through April, but the fabrication shop operates year-round. The stone is produced and sold to two customer groups. Standard products are sold to landscapers and homebuilders through dealers in the masonry supply business in both Canada and the United States with the bulk of the orders coming from southern Ontario. Custom products are sold directly to the customer, mostly for use on building exteriors. Architects like the unique look of limestone and are often repeat Ledgerock clients.

The company has custom-produced exterior limestone for an impressive list of clients throughout Canada, including the Isabel Bader Theatre, Ontario Heritage Centre and the Ontario Legislative Assembly buildings in Toronto; the Olympic Village in Vancouver; Butterfly Conservatory in Niagara Falls and numerous hospitals and universities. One of Stobbe’s favorites is the Ivey School of Business at the University of Western Ontario.

“It is a very impressive building,” he says. “The architecture is very modern.”

Stobbe continues to be impressed with the performance of his Doosan wheel loader as well. Not only does the machine help his 150 employees keep up with the time-sensitive dealer and custom orders, but it also gets high marks for ease of maintenance, reliability and durability in what Stobbe calls a demanding application.

“Before we purchased the DL250TC-3, I had no history with Doosan, but the demonstration and the total package (price, financing and warranty) was quite appealing,” he says. “We are running 30 pieces of heavy equipment. Some employees like one brand, some like another brand. And now we have a growing number of operators who prefer Doosan.”

Mined by Ledgerock
The types of limestone produced in the three quarries owned and operated by Ledgerock in southern Ontario include: