Features Aggregates Profiles
Like a rock: Castle Rock Enterprises is a staple of the Whitehorse area 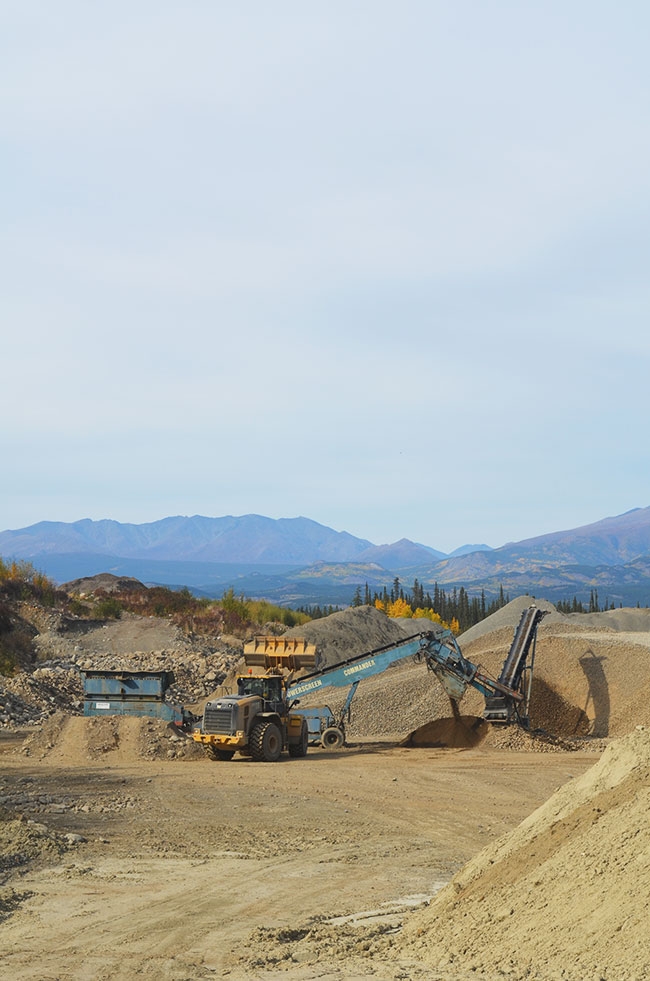 May 29, 2018 – Castle Rock Enterprises has grown to become a go-to company when it comes to aggregates, civil works, rural roadbuilding and other infrastructure needs throughout Whitehorse and other regions within The Yukon. It’s an impressive feat that was performed in a relatively short period of time.

The company started up in 1995 when the father-son duo of Rick and Ron Bonnycastle decided to get into the topsoil and gravel hauling business. One year later the family business began its own screening and crushing operations, working out of a quarry on Haeckel Hill, close to the territory’s capital.

“We started out with 40 acres,” says Ron, president of Castle Rock Enterprises, during a tour of his headquarters and aggregates operations. “We now operate the largest quarry in The Yukon.”

The Bonnycastle family business grew considerably after landing a major infrastructure project with the City of Whitehorse in 2002. The project allowed the company to expand into a combination of residential and commercial projects in the area. By 2008, the company had grown to more than 50 employees in peak season; and Rick and Ron took home the Yukon Chamber of Commerce’s Businessmen of the Year Award. The company had grown to hauling upwards of 175,000 cubic metres of gravel annually.

When Rick decided to retire in 2010, the company’s successes caught the attention of the Dakwakada Development Corporation, the business arm of the Champagne and Aishihik First Nation. The Dakwakada Development Corporation purchased the family business and it became a 100 per cent First Nation-owned company that year. With more than two decades of experience under his belt running the operation alongside his father, the company requested that Ron stay on with the company as its president to provide leadership to all of its divisions.

Further expansion
Since coming under the banner of the Dakwakada Development Corporation, the company has continued significant growth.

“We’ve grown another 25 per cent since then,” Ron says.

In 2012, the company added full design-build services that included its own engineering department and a mechanical shop.

Fast-forward to present day and the company has 30 full-time staff and anywhere from 80 to 100 employees in peak season.

The company also offers land treatment services – a branch of the business started up a few years ago to treat contaminated soil.

“We got into land treatment in 2015 to treat contaminated soil; we also provide emergency spill services,” Ron says.

“Eighty per cent of our revenues are produced in seven months,” Ron says.

For the crushing side of its business, the company works with a local custom crushing outfit.

“We’ve been working with New Way Crushing for 20 years, running our own screening the whole time,” Ron says.

Investing in growth
In the winter of 2016, the company decided a portion of its fleet was in need of replacement. It spent $2 million upgrading various pieces of equipment on the hauling and civil side of its operations. In total, the company runs about 100 pieces of heavy equipment in its various divisions.

“All of this new equipment is better on fuel,” Ron says. “We have a fairly mixed bag. Our last order was all Caterpillar gear and Kenworth dump trucks and tractors. Caterpillar’s service is phenomenal, they have a local branch in Whitehorse.”

The company’s newest additions from Caterpillar included 336F and 323F excavators, 966M and 938K wheel loaders, and a D6K track-type tractor. It also runs a collection of Link-Belt and Hitachi heavy equipment and Peterbilt trucks. Having a reliable heavy-hauling fleet isn’t just a vital part of the company’s aggregates business, it’s also a key part of its civil works division.

Going forward, expansion is still on the agenda for the fast-growing First Nations-owned company. That said, it hasn’t lost sight of the bread-and-butter of its operations.

“We’re starting to look at some mining work, trying to do some work with gold mining companies,” Ron says. “But our big focus is still water and sewer installation and maintenance.”