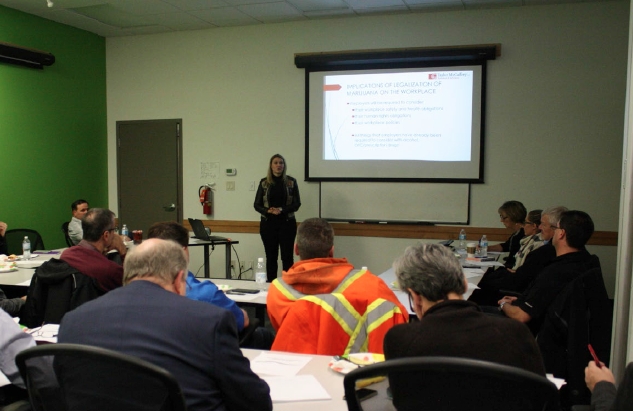 November 7, 2017 – The legalization of marijuana next year has obvious implications for a construction company’s safety and health program and its human resources policies. And, readying HR policies to meet these implications makes abundant financial sense, a gathering of company owners and senior managers at the MHCA Wednesday was told.

But the return on investment, both in terms of safety and the budget bottom line, will only be seen if employers understand their duties, and vet their policies to make sure they are solid.

“There is a business case for doing this right,” substance abuse counsellor/adviser Joel Gervais said. “This is about liability – people who are under the influence at work can be a liability and if you’re aware of this and don’t do anything about it, it can be a (business) liability.”

The construction industry routinely faces issues of substance use and abuse, with alcohol, prescribed and illegal drugs.

Gervais said whether the legalization of marijuana affects the incidence of use on the job remains to be seen.

The MHCA’s workshop this week, the first of two for members, focused on the needs and questions of company owners, managers and senior HR staff. That included a review of where policies on impairment or the use of drug testing have been challenged in court.

While federal legislation has set out that as of July 1, 2018, recreational marijuana will be legal, the regulations that flesh it out – how much can be used and by whom, at what age; where can it be sold – have yet to be set, said Jamie Jurczak, a labour-relations specialist at law firm Taylor McCaffrey.

Complicating the issue of impairment, however, is the fact that unlike alcohol cannabis is stored in fat cells and so lasts much longer in the body, sometimes up to 90 days. Further, said Gervais, it is metabolized differently for each person, even for those of similar body weight, and differently among men and women.

Some of the side effects of marijuana are well known – slowing down reaction time, affecting motor control, distorting perception, he noted.

But because today’s marijuana typically contains a much higher level of THC – the ingredient that gives a ‘high’ – its impact is different.

Paradoxically, Gervais added, some marijuana users will feel relaxed, others will get anxious; smokers can get an energy boost from marijuana, but chronic, heavy smokers can lose motivation.

Both speakers stressed that like other drugs, marijuana use that affects performance at work (impaired ability to do complex tasks and make rapid decisions) can be a sign of an underlying issue, such as addiction, self-medication, or reaction to stress.

Employers’ first duty is to protect the safety of that worker and others in the workplace, but they also have a duty to accommodate disabilities, such as addiction.

How employers discharge both, and their rights to manage workers including taking action when impairment is suspected, will depend on the quality of the company’s impairment and substance use policies Jurczak likened the workplace to that of a home – your house, your rules. You can tell people they can’t use drugs in the house. “It’s your workplace, you can make the rules and you can require employees to follow them so long as they (company rules) are not breaking any law.”

But those rules and policies must be clearly communicated to all. Similarly, issues of poor performance cannot be allowed to slide.

Absenteeism, for example, should be taken seriously, acted upon and monitored, with adequate exploration of the causes, she noted. That’s really important when, if a worker challenges a suspension or termination, an employer is asked to document the attempts to address a problem.

Jurczak underscored that the legal landscape on marijuana is shifting quickly.

The federal legislation needs refinement with regulations and the provinces still have to draw up the rules for distribution and sale. Further, important court decisions on employer/worker rights and duties are developing.

Review HR policies now, particularly those that speak to impairment, to be ready for July, 2018, she said. “Hopefully, you have to (just) tweak your policy.”

Ken Graham, rail division manager for Main Line Industries, said the MHCA workshop was a good primer for what should be included in policies but also helpful with appropriate procedures when employers are acting upon suspected impairment of workers. “I think we need to go back and review our policies and see what we have regarding drugs and alcohol and other substances.”

Wally Melnyk, CAO in Stonewall, said it was helpful to hear Gervais and Jurczak stress that many of the issues marijuana might present are probably already covered in good workplace impairment policies. However, he noted, it is worrisome that its legalization could increase the incidence of substance abuse in workplaces.

MHCA members can read the power point presentations by Jurczak and by Gervais at mhca.mb.ca, by clicking on the ‘Members Only’ tab.

Related
When pot becomes legal: implications for the workplace
ASGA tackles marijuana in the workplace
Legally high
Editorial: Up in smoke
Tags