The upgrading and paving of the Trans-Labrador Highway continues 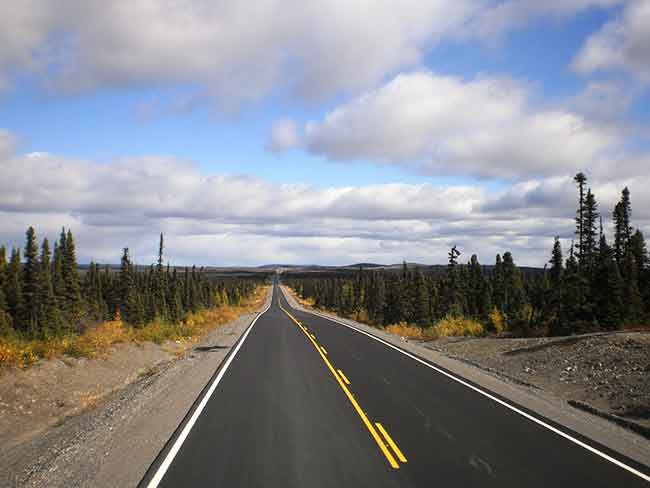 A section of the Trans-Labrador Highway through the northern wilderness. Images courtesy of Newfoundland Department of Transportation

By 2019, barring the unforeseen, an unbroken ribbon of asphalt will stretch 1,247 kilometres between the western border of Labrador and Quebec, near Labrador City, to the eastern border of Quebec and Labrador at Blanc Sablon, on the Gulf of St. Lawrence.

The final material count is not yet in, but to complete this infrastructure project, one of the largest in Newfoundland’s history, will require several million tonnes of asphalt and aggregate and well over 100 kilometres worth of guardrails. The supply chain logistics of supplying the remote worksites have also been challenging.

As a first step, Newfoundland’s Department of Transportation and Works built the TLH as a gravel-surfaced road, which was opened, end-to-end, in 2009.

Phase 1 covers Route 500, which runs 549km from the Quebec-Labrador border to Happy Valley-Goose Bay. The Department of Transportation and Works completed Phase 1 as a gravel-surfaced road in 2000. Widening and paving of Phase 1 began in 2007.

“The gravel-surface highway was RLU 70 standard cross section. The TLH is being changed from a gravel surface to a paved highway – upgraded to RCU 80. The subgrade is being widened from 9.5 metres to 12.5 metres,” explains Kent Randall, regional engineer, Department of Transportation and Works.

“Our paved driving surface is now at a 3.5-metre lane width, with 0.5-metre paved shoulders, for a total pavement width of eight metres. This is similar to other areas of our province with similar levels of service,” says Dion Tee, regional director, Department of Transportation and Works.

When contractors built the gravel surface road, the bridges were sized with the widening in mind; none of the bridges have been replaced.

Phases 2 and 3 are on Route 510, which runs 537km from Happy Valley-Goose Bay to Red Bay, 80km north of Blanc Sablon. (The last 80km section to Blanc Sablon, already paved, is not part of the widening and paving program.)

Phase 2 runs 287km from the Cartwright Access Road to Red Bay. The Department of Transportation and Works completed this gravel-surfaced section in 2002.

Phase 3 runs 285km from Happy Valley-Goose Bay to Cartwright Junction (the beginning of the access road to Cartwright off Route 510). This gravel-surfaced section opened to traffic in 2009.

This summer, the Department of Transportation and Works reached a major milestone with the completion of the Phase 1 widening and paving. On the Department of Transportation and Works’ order books for this year’s construction season is $55 million worth of work. “The [money] we allocated this year was to finish paving the last 11 kilometres of Phase 1, and to continue upgrading Phases 2 and 3 from Happy Valley-Goose Bay to Southern Labrador. Specifics include 80 kilometres of paving and 160 kilometres of widening in three separate contracts,” Tee says.

“Currently there are three contracts in progress on the Phase 2 and 3 sections: An 80-kilometre paving contract, with Pavex Ltd. out of Saint-Félicien, Que., and two 80-kilometre widening contracts with Johnson’s Construction Ltd, out of Corner Brook and Mike Kelly & Sons Ltd., [in Howley],” Tee adds.

Because Phase 1 is as good as done and dusted, metrics on it are relatively easy to sum up. “Phase 1 used 3.5 million tonnes of Class B, 1 million tonnes of Class A and 1.2 million tonnes of a maintenance grade No.3 aggregate to widen the highway, and 510,000 tonnes of hot mix asphalt. [We] used 81,000 metres of guide rail,” Randall says. (It is a safe bet that it will take this much aggregate and asphalt again to widen and pave Phases 2 and 3.) The estimated cost to upgrade the entire TLH is roughly $800 million.

Each widening contract has required 120 to 130 people and 60-70 pieces of equipment, ranging from excavators, rock trucks, tandem dump trucks, drill rigs, dozers and loaders, to rock crushing equipment. Each paving contract has required around 120 workers and 40 to 50 pieces of equipment, including asphalt plants, rock crushers, semis, pavers, and tandem dump trucks.

The short construction season in Labrador is a big challenge, Tee says. “Widening can be completed between May/June and Oct/Nov and paving between June/July and September.”

Rather atypically, because so much of the TLH is so far from towns, contractors had to bring in portable construction camps.

A section of the Trans-Labrador Highway through the northern wilderness.

On the maintenance side, there are some local support services; e.g., parts dealers in Happy Valley-Goose Bay, Churchill Falls and in Labrador City, although by no means always near at hand. Specialised parts and manufacturers representatives for the asphalt plants have to be brought in from elsewhere.

Food came from various sources. The fuel came from Happy Valley-Goose Bay, which receives its delivers by ocean tankers. Bitumar Inc., in Montreal, trucked in the liquid asphalt. Asphalt runs, then, could be as long as 1,773km to Happy-Valley-Goose Bay, and almost 2,500km to Red Bay.

A few tanker loads had to return to Montreal because of forest fires in Labrador and Northern Quebec in 2013.

“There is a period of time [after which] the liquid asphalt has to be removed from the truck. Once it falls below a certain temperature, it can’t be used, and you have to return it to the source,” Tee explains.

“On and off, they were providing escorts where the fires were in close proximity to the road. There were disruptions on and off for one-and-a-half months. That was unusual.

One night a construction camp had to be evacuated due to a reported fire,” Tee says.

The TLH connects at least 15 communities. Many of them were difficult to get in and out of before the building of the TLH. Its social and economic impact has been large and gratifying, Tee says.

“In 2009, when we opened the TLH connecting western and central to southern Labrador, and a number of communities linked up, there were families who had never traveled to their home towns in 20 years.“It was a pretty rewarding feedback that we heard, aside from the ability to move goods at lower costs. From a social perspective, communities were overwhelmed. It was a really good story for the province.”