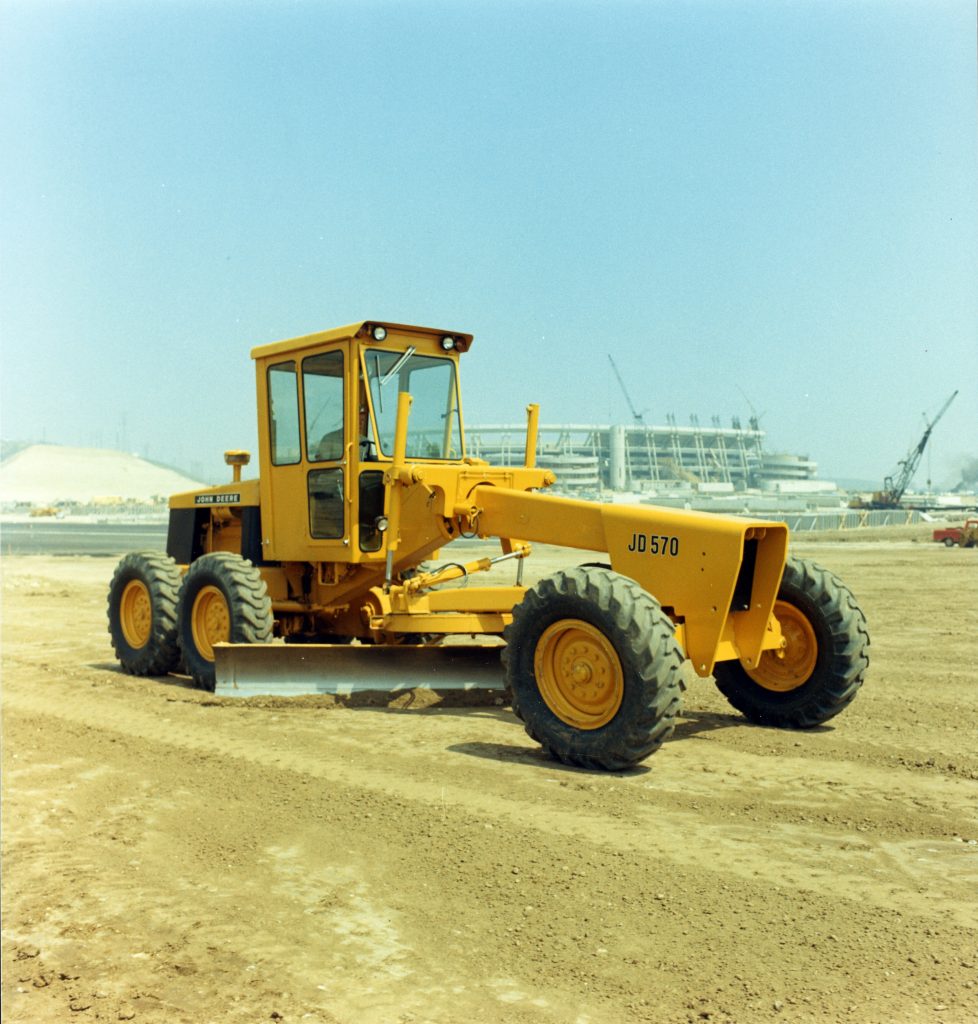 February 14, 2017 — To commemorate 50 years of the articulated motor grader at CONEXPO-CON/AGG in Las Vegas, John Deere will display a restored JD570 model that was reconditioned by two retired John Deere Dubuque Works employees, Don Bagby and Jerry Bode. Introduced in 1967, the JD570 pioneered many of the innovations and developments seen on motor graders today, including articulated frame steering, hydraulically controlled machine functions and the rollover protective structure (ROPS).

“While we often focus on the present and future of equipment at CONEXPO/CON-AGG, we wanted to tip our cap to the JD570 and the role it played in the evolution of motor grader development,” said Luke Kurth, product marketing manager, motor graders, John Deere Construction & Forestry. “The JD570 is a true testament of innovation and durability, and we can thank it for many of the features we see on our G-Series motor graders today.”

Prior to the JD570 introduction, graders of the time were straight-frame machines with solid rear axles and typically only featured front-axle steering that led to poor maneuverability. The addition of frame articulation enabled operators to work more efficiently, especially in confined areas, than any previously built grader. Its steering methods enabled operators to “crab steer,” allowing for completely new uses. The grader’s front wheels could be articulated to move on slopes, on windrows and in ditches, while the back wheels stayed on solid footing.

An immense effort went into the design and development of the saddle as well. The result was a design that would allow the operator to place the blade into a 90-degree bank, or any other banking position, in less than one minute without leaving the operator’s seat. The saddle was secured to the mainframe with a unique tapered-pin design that was held into engagement by hydraulic pressure — also a grader industry first.

The JD570 was also the first grader, and possibly the first piece of construction equipment, to have a cab and canopy with the integral ROPS available from the factory. The year prior to its development, John Deere introduced the first commercially available ROPS for farm tractors and subsequently shared the patent for this important safety feature with the industry at no charge.

The 83-horsepower motor grader incorporated a power shift transmission with eight forward and four reverse speeds, with a top speed of 21 mph. The innovative machine came equipped with a 12-foot moldboard and a 17-foot, 4-inch wheelbase and weighed in at 20,278 pounds. It also had a turning radius of just 18 feet. Production of the JD570 ran until 1971, when it was updated to the “A” series. The power train configuration became the foundation of John Deere graders up until 1997. The machine also was the first motor grader to be compatible with snow wings.

About Deere & Company
Deere & Company (NYSE: DE) is a world leader in providing advanced products and services and is committed to the success of customers whose work is linked to the land – those who cultivate, harvest, transform, enrich and build upon the land to meet the world’s dramatically increasing need for food, fuel, shelter and infrastructure. Since 1837, John Deere has delivered innovative products of superior quality built on a tradition of integrity. For more information, visit John Deere at www.JohnDeere.com.