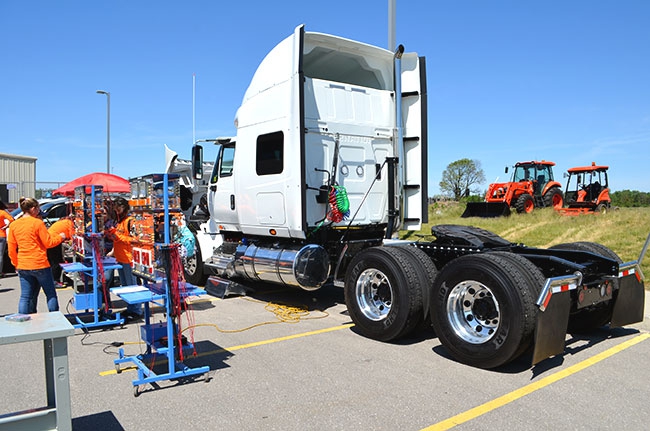 Conestoga College presented the event in cooperation with the Ontario Youth Apprenticeship Program, School College Work Initiative and the Ministry of Training, Colleges and Universities. The event provided 12 trades work stations, where students were given the opportunity to hear from faculty and students about the trade, and get hands-on experience working with the tools of the trade.

“It has been our goal to expose more young women to the trades and engineering,” says Julia Biedermann, executive dean of engineering & IT and trades & apprenticeship programs at Conestoga College.

The Jill of all Trades event was created as a result of a discussion that took place at a conference at Conestoga College just three years ago. The college hosted the Women’s Access to Trades Network conference, which included a conversation that involved policy makers and stakeholders. A representative from the Ministry of Training, Colleges and Universities recommended that the Ontario Youth Apprenticeship Program (OYAP) could access additional funding to increase exposure events for young women.

Through the School College Work Initiative (SCWU) and a group of eight school boards surrounding Conestoga – extra funding was obtained for the creation of a trades-exposure event geared specifically towards women. Rather than have eight separate events, representatives chose to create one single event, and Jill of all Trades was born.

Conestoga itself has been a leader in providing apprenticeship programs since it opened its doors in 1967, and currently competes with Hamilton’s Mohawk College for the most apprenticeship opportunities available at any Ontario college. However, in the last 10 years, the school has also introduced training for post-secondary students as well.

“We figure that, by doing events like this and allowing young ladies to pick a course in high school that will allow them to at least try the skilled trades, then eventually they might come to post-secondary or they’ll go into an apprenticeship program,” explains Brenda Gilmore, program manager for the school of trades & apprenticeship at Conestoga.

The day began with a keynote speech from Danielle Bryk, the host of Bryk House on HGTV Canada. Bryk spoke about the importance of exposing female students to opportunities to the trades while in elementary and secondary schools, and emphasized the amount of opportunities that lie ahead for girls looking to the trades as a career. However, with so few women currently working in the trades, she recognized that there are few opportunities to tell women about the options available.

“One of the reasons why there are so few women joining the industry is that there’s a lack of role models,” Bryk says. “Its important to show young women that this is a viable option for them.”

Already, there are signs that Conestoga’s event could be helping in that regard, even after just two years of holding the event.

“One student who attended in year one, came to Conestoga College for our Women in Skilled Trades (WIST) – General Carpentry program,” Gilmore explains. “She’s an employee for a company now after just one year!”

The 38-week WIST Pre-Apprenticeship General Carpentry certificate program represents one of the many general level trades programs available at one of the College’s five Ontario campuses.

The success of the Jill of all Trades event after just two years provides hope that that the upcoming skilled trades shortage will be met thanks to innovative programs providing new sources of outreach to young students looking for a successful career after high school.