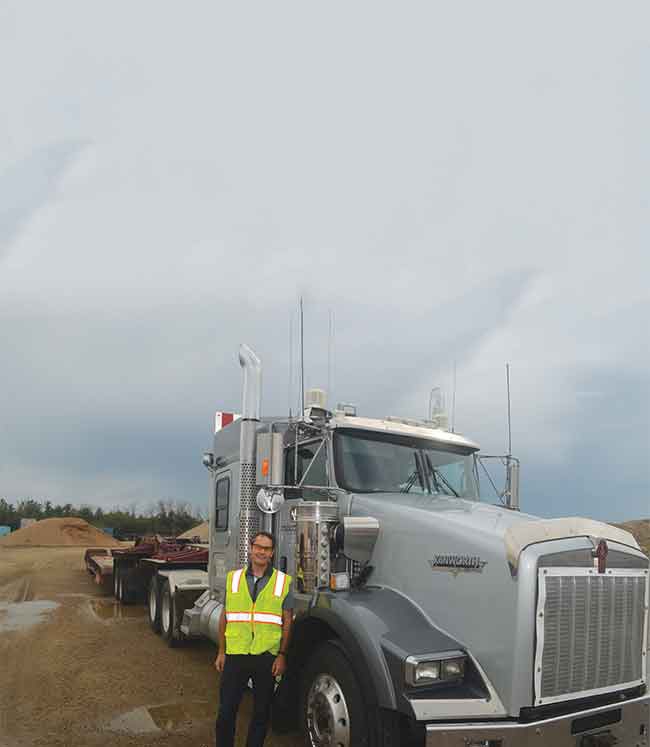 Terry Mix is a second-generation owner of Mixcor Aggregates in Leduc, Alta.

October 6, 2016 – Companies across Alberta have felt the economic impact of the downturn in the oil and gas industry. With such a vital piece of the province’s economy in a depressed state due to low oil prices, companies from dozens of sectors have been forced to look for alternative markets for their goods and services.

In addition to looking for new markets to keep their employees working, some companies have had to take a hard look at how they should invest in the coming years. In Leduc, Alta., Mixcor Aggregates has been planning its strategies to deal with the economic impact of the downturn for some time, and the company’s investment strategy is all about focusing on its people.

“We’ve been transitioning from being an owner-operator to being a larger second-generation company and developing more depth in our playing field amongst our management team,” says Terry Mix, co-owner of Mixcor Aggregates, who owns and operates the company with his wife, Dawn. “Now we can hire someone who has a passion for their position who will hold their people accountable, but doesn’t need to know everything about the entire operation because we have a much more balanced management team.”

A couple of years ago, the company hired a consultant to work with Terry, Dawn and the rest of the management team in regards to annual strategic planning, quarterly priorities, weekly check-ins and more. Terry says it has helped the management team phase these agenda items in as a natural part of the company’s weekly cadence of checking in, holding each other accountable for the priorities they’re working on, and looking at how the company is progressing in both putting out daily fires and its longer-term goals – whether its expanding into new areas, operational excellence, or how the company is continuing to train and grow the people inside the company.

“I think before, we sometimes went with the flow of the economy and we just ‘rode the wave,’ and now we’re definitely more intentional in how we do things,” Dawn says. “We involve a lot more people in the making of decisions to make our operations successful. It’s no longer a couple of people sitting in the boardroom, it’s a whole team.”

“We expect them to come to the meeting and speak up, and know it’s a safe place,” Terry says. “We need their eyes and input to make sure we are successful… it’s a great tool to get honest feedback and turn them into real actions. We also get to see the rising stars in the company and get to know their personality strengths.”

By identifying the up-and-comers within the company earlier, management is able to better focus training with these people for the applications and operations they are best suited earlier, which can lead to a more fulfilled employee and improved retention rates.

Measuring performance
Another tool that has seen increased use from the second-generation company to reach their long-term strategic plan and measure day-to-day efficiencies is the use of key performance indicators (KPIs). The company’s management spent significant amounts of time determining the right KPIs to look at and measure that will offer immediate insight about the current and long-term success and viability of the company.

“Now on a daily basis there are KPIs we’re watching, like the number of trucks dispatched, which indicates if we’re going to meet our monthly sales targets,” Terry explains. “We don’t just look at how many tonnes our plant produced, or how many cubic metres our earthworks guys move, but how many people did they use to do it – tonnes or cubic metres per man-hour – and holding our supervisors accountable to those numbers by having them report on their KPIs on a weekly basis in a public forum that includes all the managers and other supervisors in the company.

Power of diversity
The advantage of annual and quarterly strategy meetings is that the company was able to plan for the coming slowdown well in advance.

Although the aggregates industry has a tendency to be a year behind the general economy, it can still make for difficult planning for the years ahead.

“The aggregates market lags the rest of the economy,” Terry says, “so we knew this year was going to be a different year.”

“Every year is so different,” adds Dawn. “You have the explosive growth in 2007 and 2008, and then you get hit by the recession so it gets dialled back, then recovery and it grows again, and now Alberta has been suffering quite a bit for the past 18 months to two years.”

To help weather the economic storm that comes with the cyclical nature of a resource-heavy provincial economy, such as Alberta’s oil and gas sector, Mixcor has kept its operations fairly diverse and has even expanded into Calgary with new gravel properties during these more difficult times.

“We just need a strong general economy,” Terry says. “We see ourselves targeting a bunch of different markets from provincial Alberta Transportation highway work to municipal work and residential. We target everything where we can provide an opportunity to help our customers. Some of the groundwork that the first generation of this company did was follow Alberta Transportation jobs around the province. As a result, we now have gravel pits all over Alberta providing us with the ability to bid a variety of jobs in a variety of locations.”

Having a few extra projects on the go can be the difference between layoffs and retaining good people.

“It used to be hard to find good people,” Terry says. “Now we’re making hard decisions on what to do with our good people.”

“Its harder to staff when its extremely busy, and now that we’ve gone to a bit more seasonal – not as much work in the winter – trying to keep good people working is the challenge,” Dawn says.

Terry Mix is a second-generation owner of Mixcor Aggregates in Leduc, Alta.

The fleet
For its crushing operations, Mixcor operates two matching Terex MVP450 cone crushers. The company has one crushing plant built with an Elrus chassis, while the other is built with a Pennar & Lewis Rock Technologies Chassis. The company also uses a Mormak portable wash plant, with Kolberg blade mill, Terex 6×20 3D wash deck and twin 54” Trio dewatering screw.

The majority of Mixcor’s big iron is a collection of Komatsu heavy equipment with a small amount of John Deere and Caterpillar to complement its operations. For its earthworks, Mixcor relies on seven HM400 Komatsu articulated dump trucks and a PC800 excavator.

The company also has 16 gravel hauling trucks in its operations comprised mainly of Peterbilt models.

With their eyes focused on the future of their business, Terry and Dawn Mix are ensuring that Mixcor Aggregates is well positioned now and for years to come.

The beginning
Established in 1969 as Lorne Mix Trucking, Lorne and Tina Mix started their business with a single-axle gravel truck. They soon recognized the significant advantage of providing both the supply and delivery of aggregate resources to meet the increasing needs of the road building and construction industry. In the early 1970’s, they formed L&T Mix Sand & Gravel Ltd. (L&T) to serve the rapidly expanding City of Leduc and Nisku Business Park.

With the opening of their Matejka Pit, L&T secured an excellent long-term supply of quality sand and gravel, and in 1978 they purchased their first crusher. This enabled them to provide a more diverse range of products to their customers. Additionally, L&T continued to source new supplies of sand and gravel, one of Alberta’s most abundant natural resources.
As part of their succession plan, ownership and control of L&T transitioned to Mixcor Aggregates Inc. in 2002.

Today, Mixcor operates in the Central Alberta aggregates market from Edmonton to Calgary and has access to supply pits in other locations across Alberta including Calgary, Sundre, Drumheller, Coronation, and Viking.