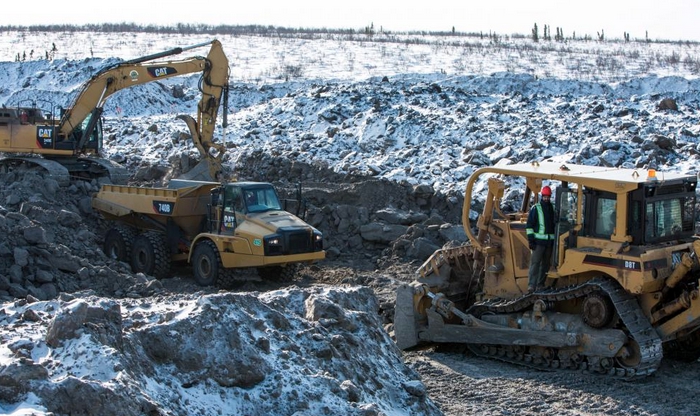 November 25, 2016 – The Inuvik Tuktoyaktuk Highway is entering its final season of winter construction.

When complete, the 137-kilometre gravel road will provide year-round overland access to Tuktoyaktuk on the Beaufort Sea, which is currently accessible by ice road, barge or air.

The work expected to be completed over the final winter construction season includes the final 3.5 kilometres of the highway, two bridges and eight culverts.

“I am very pleased with the progress being made on the historic Inuvik Tuktoyaktuk Highway which will connect Canada by road from coast to coast to coast. In addition to moving goods and people, it will serve as a key link in connecting northern communities,” stated Michael McLeod, MP for the Northwest Territories. “Such infrastructure investments create jobs and encourage economic growth for the middle class and those working hard to join it. We will continue to build the infrastructure of the 21st century to ensure a high quality of life for generations to come.”

The final grading and surfacing work, as well as the installation of traffic signs and guardrails, is expected to be complete by next summer with the entire project finished by fall 2017.

“The Inuvik Tuktoyaktuk Highway will be the first ever Canadian all-weather highway to the Arctic Ocean,” stated Wally Schumann, Minister of Transportation for the Government of the Northwest Territories. “This extraordinary national achievement represents strong partnership between the Government of the Northwest Territories and the Government of Canada on a nation-building project that has had significant impact on our economy. Transportation has always been at the forefront of enabling Northerners to grow and develop our economy, and never has it been more important to guaranteeing our future growth and prosperity than it does today.”