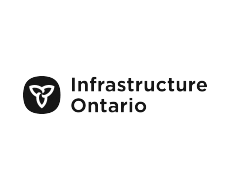 Lindsay was appointed CEO of IO in November 2020. In this role, he works closely with his executive team and partners to build, manage, finance and enhance the value of the province’s assets.

“I’m very excited to be speaking with you today,” said Lindsay. “Provide some background on what it is we do, how we build and leverage partnerships, and what sorts of projects we can expect to see from IO and our agency partners moving forward.

Lindsay said IO is very privileged to work on a vast portfolio of infrastructure projects for the province. And he wanted his presentation to cover the private partnerships work that IO does on highways and transportation projects.

The Ministry of Infrastructure (MOI), in consultation with other government ministries, determines the infrastructure renewal budget. The ministry identifies which projects will be assigned to IO or to a provincial ministry.

“Following Cabinet approval, IO receives a Letter of Direction from the Minister to confirm an approved project, it’s construction start date, and total project budget. IO works in partnership with its client ministries to manage the project,” said Lindsay.

He said this model has worked for IO and has a strong track record of success on transit and transportation projects. IO has had 132 projects assigned to IO by the province of Ontario. “That’s roughly $101 billion of total capital costs. Seventy-four of those projects have reached completion.”

Lindsay said it isn’t just because of the things IO has done that make it successful, it’s because at the heart of it all, it’s a real partnership with our counterparties.

“I think we can be collectively, rightfully proud that the P3 approach that we have really pioneered here in the province of Ontario, is increasingly being replicated by other jurisdictions around the world.”

What’s in the pipeline?

“We think that quarterly updates as a measure of transparency are incredibly important and I think the province of Ontario is to be commended relative to other jurisdictions for so transparently and so consistently broadcasting the work Infrastructure Ontario is going to deliver,” said Lindsay.

Lindsay concluded the IO update by answering questions from several of the attendees that watch the session.

When asked, “Can IO provide any update on when we might see more highway bridge projects on the IO pipeline? What projects can we expect to see added to the IO pipeline soon?” Lindsay said he can’t confirm specifics beyond what’s on the pipeline right now.

“Have a confidence, members of ORBA, that we are deep in discussion with the Ministry of transportation about their pipeline, and which of those projects might be suitable for IO to deliver in partnership with the Ministry of Transportation,” he said. Lindsay added that part of the reason IO does quarterly updates is to maintain that dynamic of how projects get added to IO’s pipeline.