2017 looks to be a year in transition 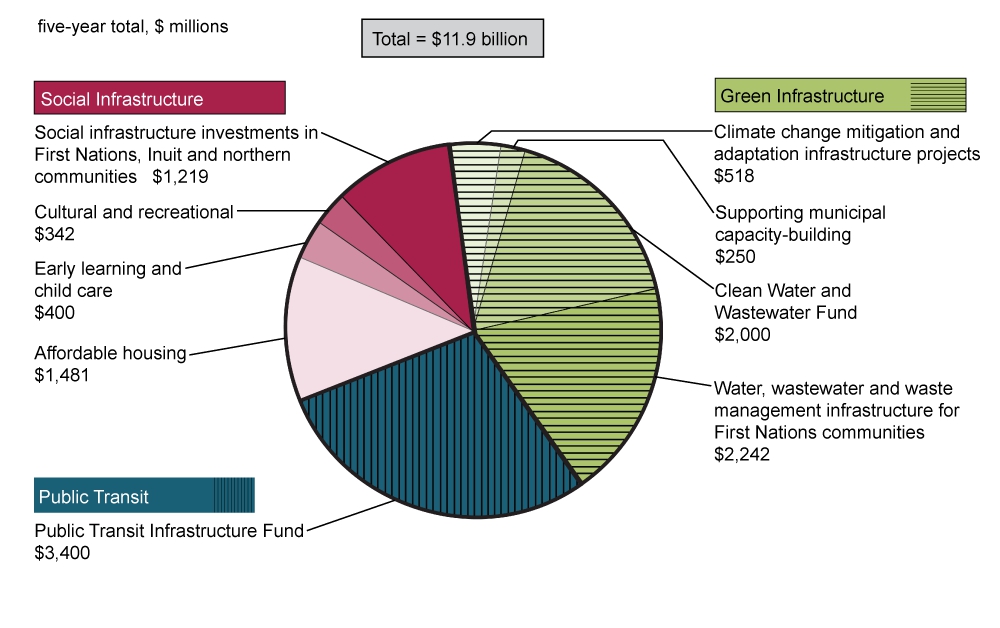 In the first half of 2016, the federal government unveiled phase one of its long-term infrastructure spending plans; which had $11.9 billion allocated over the next five years. Government of Canada

Hopefully that will be the case for Canada’s aggregate and road building sectors, which for the most part, are expecting a relatively stable year similar to 2016.

Companies are eagerly awaiting the transferring of new funds to the provinces and territories from a Liberal federal government that doubled down on infrastructure spending in the 2016 Budget. The federal budget earmarked $60 billion in additional funds over the next 10 years for the construction of new transport and energy systems intended to create long-term economic growth.

In the first half of 2016, the federal government unveiled phase one of its long-term infrastructure spending plans; which had $11.9 billion allocated over the next five years. But the transfer of some of the 2016-17 funding has experienced some delays and may need to be delayed until 2017-18, according to recent news reports.

“I think 2017 in particular is a transition year, but I’m optimistic,” says Manitoba Heavy Construction Association president Chris Lorenc, who adds that the federal government is likely still identifying what its priorities are and how they then manifest themselves in funding agreements. “We should start to see a growing economy with growing opportunity for all segments of the economy in 2018 and further in 2019, 2020 and beyond.”

Once the additional federal infrastructure spending gets going it should help counter slowing and stalling new housing construction in many provinces.

According the Canada Mortgage and Housing Corporation’s (CMHC) Housing Market Outlook released in the fourth quarter of 2016, construction of new homes is expected to decline slightly in 2016 and 2017 before stabilizing in 2018.

In the oil-producing provinces of Alberta, Saskatchewan and Newfoundland & Labrador, new housing construction is expected to continue to be negatively affected by lower oil prices until the end of 2017, when the CMHC report states that oil prices are expected to start to recover.

In Alberta, the aggregate sector expects a small negative impact from the decline in home building in 2017; with the exception of the rebuilding of Fort McMurray, which should boost local employment and re-employ idled workers. Residential construction in Fort McMurray is expected to peak in 2017 with more than 800 new housing starts expected to begin in 2017, according to the Alberta Sand & Gravel Association (ASGA).

X factors
The inauguration of U.S. President Donald Trump creates a big X factor for Canada’s trade relations with its neighbour to the south.

Although Trump hasn’t singled out Canada in his speeches (at the time this article went to production), he has passionately expressed his desire to put America first when it comes to its trade relations with other countries and previously expressed displeasure with some current agreements, such as NAFTA. Given the vast amount of trade between the two countries, this creates a large amount of uncertainty for Canada’s relationship with its biggest and closest trading partner.

Lorenc says this is a significant external factor that needs to be considered for all sectors.

“What will the Trump administration policies be as it pertains for global trade?” he says. “If the U.S. chooses to turn in inwardly – buy American first – that harms everybody.”

Another X factor for the economy in the next few years will be the creation of the Canada Infrastructure Bank, designed to provide low-cost financing for infrastructure projects, and the role it will play.

The bank is expected to be up and running by the end of 2017.

The remaining $20 billion in capital will be “available to the Canada Infrastructure Bank for investments, which will result in the Bank holding assets in the form of equity or debt,” according to the Government of Canada’s webpage titled, A Transformation Infrastructure Plan.

Upcoming challenges
One of the biggest challenges for aggregate producers is obtaining new licenses that are close to market, particularly in Ontario’s Greater Golden Horseshoe Area (GGH).

The Ontario Stone, Sand & Gravel Association’s (OSSGA) executive director Norm Cheesman says that the province will experience 30-per cent growth over the next 20 years and that issues such as longer license application wait times need to be addressed and dealt with. If they are not addressed, he says there is the potential for the industry to not have enough close-to-market aggregates to keep up with infrastructure needs in the GGH and that could have significant economic and environmental impacts.

“The stuff that’s being built in the Greater Toronto Area requires high quality and it’s available in the Golden Horseshoe. If we can’t get that licensed and on the market there’s going to be consequences,” he says, citing increased costs for home builders and infrastructure projects, as well as increased GHG emissions from trucks forced to haul aggregate from farther away.

“It’s a finite resource and we’re struggling to get access,” says Kelly Scott, president of the B.C. Road Builders & Heavy Construction Association, who adds that the provincial government needs to work closely with municipalities to open up access to new or existing supplies.

Faster procurement and tendering is an issue being tackled right now in the Winnipeg area. In Winnipeg, the MHCA is working with the City of Winnipeg to ensure its infrastructure programs are adopted early so procurement can be accelerated and tendering can be conducted earlier for timely awarding of contracts to make the construction season as long as possible, Lorenc says.

“The aggregate industry does not have the desired recognition in Quebec,” Bourque says. “The ACRGTQ wants this industry to be recognized as a major player and as indispensable to the general public and decision makers.”

ASGA’s new president Dale Soetaert says that the industry needs to a better job of interacting with the community and helping people recognize the value of the industry.

“We need to be responsible for getting our message out,” adds OSSGA’s Cheesman. “We have a good story to tell. We build things, we’re environmentally responsible, and we need to get that message out there.”

As part of OSSGA’s relationship building with the public, it created a targeted advertising campaign to the boost the image of the industry in Wellington County last year. The ads were placed in newspapers, at transit shelters and movie theatres and on various websites. The ads contained facts about the various aspects of aggregate operations.

Keeping people working
Finding enough work will be the main challenge for Saskatchewan’s road building and aggregate sectors in 2017, according to BLS Asphalt’s Jonas Short, an active member of the Saskatchewan Heavy Construction Association, whose company is based in Regina, Sask. Short says the economic downturn has created a highly competitive marketplace with less work that has an abundance of qualified contractors bidding on work. Many of them come over from Alberta looking for new opportunities.

“They’re competitive and here to work,” Jonas says. “You don’t begrudge them for that, it just adds more names to the tender list and it keeps prices down and keeps competition stiff.”

He adds that keeping people working in the tougher times is a key to employee retention in the road building and aggregate industries.

“Good people in an economy like this are going to get scooped up,” Short says. “You’re going to find your diamond in the rough at this time, so it’s of best interest to keep them around at all costs. You expect a lot from them in the good times… in the bad times they expect to be taken care of.”

Short says there aren’t currently a large number of big projects going to tender in the province, and he expects 2017 to be on par with 2016 for most companies where things were neither extremely busy or quiet.

B.C.’s road building sector also expects hiring challenges in 2017, but those issues are due to an over abundance of current and future projects, like the construction of the Site C Dam, George Massey Tunnel Replacement Project and the recently approved Kinder Morgan Pipeline, to name a few.

“It’s not just operators on excavators and dozers, it goes all the way up the supervisory side,” says Scott. “It looks like there’s lots of work out there, I think the challenge will be getting the opportunity to get the right guys so you can get the work done.”

In Ontario, OSSGA recently surveyed its membership about their outlook for 2017 and the results suggested a year similar to 2016, within three or four per cent. The ACRGTQ expect employment in the road building and aggregate sectors to remain stable throughout 2017.

British Columbia
B.C. is entering Year 2 of B.C. on the Move: A 10-year Transportation Plan, which includes investments over the first three years of $1 billion for improving highway capacity and reliability; $380 million to resurface provincial highways; $180 million to repair and replace provincial bridges; and $270 million to improve the condition of provincial side roads.

Saskatchewan
More than $3.5 billion was invested in infrastructure projects through the Saskatchewan Builds Capital Plan in 2016-17 with $875.7 million for transportation infrastructure investment. The province’s Highways 2020 Plan outlines a three-year, $70 million commitment to fix highways.

Manitoba
The province committed $1.8 billion for strategic infrastructure funding in Budget 2016. Over the next five years, the province has committed $2.5 billion for its highways program with $502 million earmarked for 2017-18.

Quebec
The province announced total investments of $88.7 billion under the 2016-2026 Quebec Infrastructure Plan (QIP). There is $9.6 billion earmarked for infrastructure investment in 2016-17.

New Brunswick
Under the 2017-18 Capital Budget, the province will invest $447 million in roads, bridges, buildings and other infrastructure, including the construction of Route 108; Route 105 and the Fundy Trail Parkway Connector.

P.E.I.
The 2017-18 Capital Budget estimate for the Department of Transportation, Infrastructure and Energy’s capital improvements of highways is $39.5 million, including $15 million for national and collector highways; and $14 million for the Cornwall Perimeter Highway.

Newfoundland and Labrador
The province and feds announced $63 million in joint funding this past summer for the widening of the Trans Labrador Highway, which will involve paving an additional 160 kilometres of the highway.

The Yukon
This past summer, The Yukon and the federal government announced it would spend $78 million on 17 infrastructure projects with approximately $20 million coming from the territory.

N.W.T.
The $299-million Inuvik Tuktoyaktuk Highway is entering its final season of winter construction. When complete, the 137-kilometre gravel road will provide year-round overland access to Tuktoyaktuk on the Beaufort Sea.

Nunavut
Nunavut announced last year that its Iqaluit’s port project will receive $63.7 million in federal funding. The project will include a deep water port, with one fixed berth and a secondary off-loading wharf. The port could be open by 2020 if MLAs approve Nunavut’s $21.2 million contribution.