Focusing on what matters most 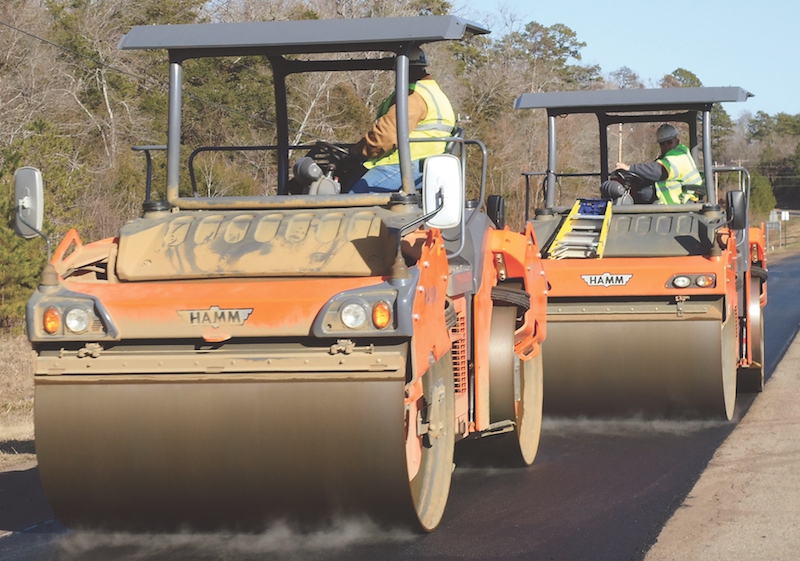 December 13, 2016 – It is no secret that proper compaction in the field is one of the most important aspects of building a pavement and is key to long-term pavement performance. Research shows that durability is linked to increased pavement density.

“Even if you have the best materials and production techniques, if you don’t compact properly you won’t get good performance,” explains Mark Buncher, director of engineering for the Asphalt Institute. “Increasing density is normally very achievable and makes a significant difference in performance.”

In fact, a number of lab and field studies show that a one per cent increase in density can improve durability by at least 10 per cent (NCAT Report 16-02, 2016). So, an asphalt overlay constructed to 93 per cent density might be expected to last 20 years while the exact same asphalt overlay constructed to 92 per cent density would only be expected to last 18 years. Other research, such as the studies conducted at WesTrack test track in the late 1990s, have concluded that a bad mix with good density out-performed a good mix with poor density for ride and rutting.

The good news is that achieving a higher density pavement is possible by using many existing construction and compaction best practices at a minimum of additional cost. For example, balanced production is essential. The timing of production and delivery to the jobsite is critical so that the paver can maintain a constant speed and does not have to stop. Paver speed should be such that the entire rolling operation can stay up with the paver. If the paver gets too far ahead of the rollers, the mat will cool excessively, which will inhibit compaction.

Improved density is facilitated by having large enough rollers, the adequate type (vibratory, static, pneumatic) for each phase of rolling, not traveling too fast, and having a sufficient number of passes. Establishing a consistent rolling pattern, including speed and lap pattern for each roller, is vital. For optimal compaction, it is critical to know the correct temperature ranges for each phase of rolling. Weather conditions will affect cooling rates so this must be watched and adjustments made. Lift thickness has a drastic effect on how fast a mat cools, as thinner mats cool more quickly than thicker mats.

Having adequate design lift thickness based on the nominal maximum aggregate size (NMAS) of the mix is essential if we want the contractor to have the ability to achieve good compaction. Typically for fine graded mixes (on the fine side of the maximum density line (MDL)), at least three times NMAS is needed; for coarse graded mixes (on the course side of the MDL), at least four times NMAS is needed. Smaller NMAS mixes and fine graded mixes will have a higher binder content and will generally be easier to compact. They will also be less permeable at the same air void content, leading to increased pavement durability.

Even a well-compacted pavement layer will not perform well if it is not properly bonded to the underlying layer. Tack coat affects compaction by creating a bond between asphalt layers that holds the mat in place as it is being compacted. It is vital that adequate tack coat is properly applied to get good adhesion between mats; which allows for the pavement structure to act as a unit. It is low in cost, but pays dividends in performance.

As well as best compaction practices, mix design can also have a big influence on compactability. For example, increasing the asphalt cement content can make the mix more compactable as well as reducing permeability. “Mix design is always a balance between strength and durability. We can design a mix that will be highly rut resistant, but it will not be durable. Or we can design a very durable mix that will be prone to rutting. The key is a balanced mix design,” says Buncher.

“The amount of air voids in an asphalt mixture is probably the single most important factor that affects performance throughout the life of an asphalt pavement. The voids are primarily controlled by asphalt content, compactive effort during construction, and additional compaction under traffic.” – Ray Brown, NCAT Report No. 90-03, Density of Asphalt Concrete – How Much is Needed? (1990)

A number of newer, innovative technologies can also improve the compaction process. Intelligent compaction uses GPS sensors to confirm that all areas of the mat are compacted by the roller, and temperature sensors to verify that that the roller is in the right place for the compaction process. Newer roller equipment such as vibratory pneumatic and oscillatory rollers is available to aid in compacting difficult mixes. Warm mix asphalt technologies can also aid in compaction. By increasing the amount of time available for compaction, it provides the opportunity for more consistent compaction.

Given that there is such a dramatic impact on pavement performance when density is increased, the Asphalt Institute in co-operation with the FHWA created a one-day workshop on compaction and pavement durability. “The workshop has a ‘back-to-the-basics’ focus regarding compaction and the importance of all the details in the compaction process from mix design to field production to testing to the finish roller,” says Tim Aschenbrener, who oversees the workshop and demo projects for FHWA. “There are even lessons on many of the newer innovations that assist with compaction.”

Over ten of these workshops have been offered in the U.S. already, with more planned for the remainder of this year and into next. In February, 2017, OHMPA’s Technical Director Sandy Brown along with a fellow AI Regional Engineer will be teaching the course in Toronto. “Density in the field is the most important aspect of building a pavement, and we know that it’s not just about adding more rollers. There are many aspects to achieving higher density and this workshop does a fantastic job of covering those fundamentals,” says Brown.

As infrastructure loads continue to rise and budgets continue to fall, it is more important than ever to implement changes that will increase pavement life and maximize return on investment. Executing an enhanced compaction process with the resulting higher in-place density will lead to improved durability and long term pavement performance.

This article originially appeared in the Fall 2016 issue of OHMPA’s ASPHALTopics. Lara Henry is the editor of ASPHALTopics.

Chart 1 (Washington State Study)
This Washington study from the early 2000s highlights the relationship between in-place pavement air voids at the time of construction and pavement service life to first overlay/rehabilitation. 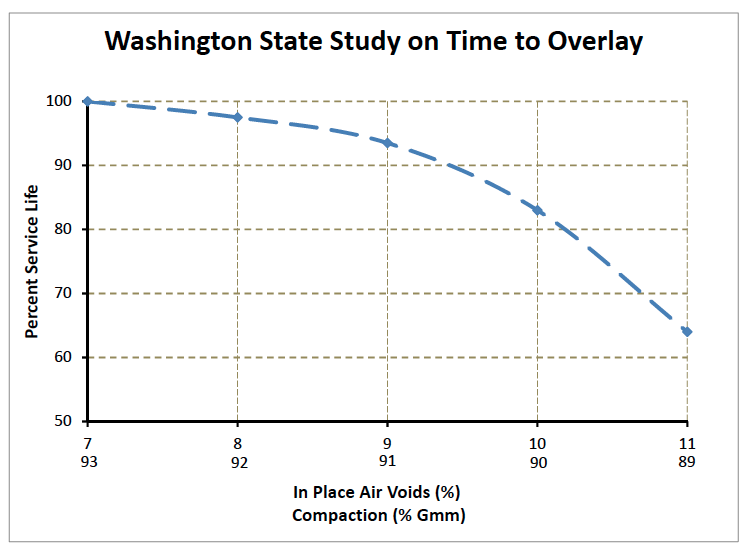 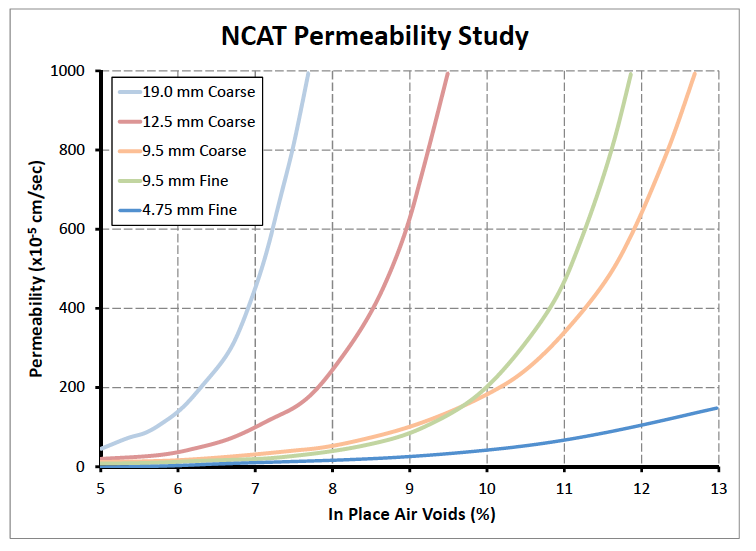 Chart 3 (New jersey Balanced)
An example of the Balanced Mix design approach used in New Jersey. Note that the optimum binder content determined by the standard mix design method is less than the balanced performance zone. 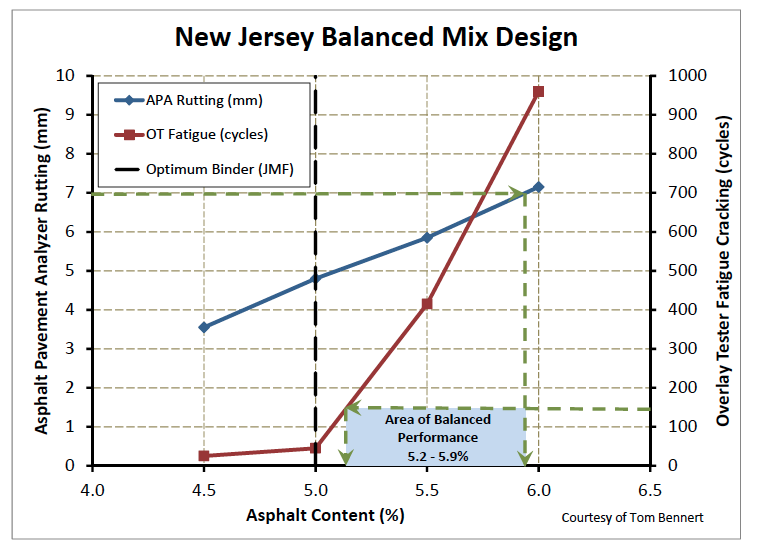 This one-day workshop offers owners and contractors the opportunity to learn about the dramatic durability increases that can be realized from relatively small increases in in-place densities.

The workshop provides the most current information on achieving consistently high densities and the resulting economic benefits.

Registration details will be available soon.