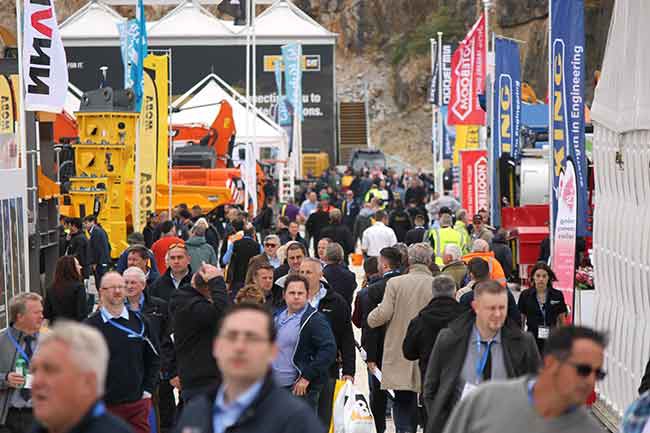 More than 18,000 people battled rainy weather over three days at Tarmac’s Hillhead Quarry, near Buxton, Derbyshire, England for Hillhead 2016, which took place from June 28 to 30.

Visitors took in live demonstrations of the latest technologies for the quarrying, construction and recycling industries. Attendance for the event was up more than seven percent compared to the previous show in 2014. This year saw more working demonstrations than ever before, creating some of the busiest live action ever seen at Hillhead, including no fewer than 14 excavators in the new-look quarry face area at one point during the show.

The biennial trade show featured a wide range of products for road building and aggregates professionals from 470 exhibitors.

Here are a few of the products on display and in action at the show for the Canadian market:

Powerscreen
The Powerscreen Chieftain 2200 is designed for operators who require large volumes of high specification products with maximum versatility. The Chieftain 2200 has two highly versatile double deck screenboxes, which provide a total screening area of 19.5 m2. It has a revolutionary patent pending drive system, which allows switching between two and four bearing with bolt-on parts. User benefits include a quick set-up time with hydraulically-folding conveyors and track mobility. Its high aggression screenboxes handle dirty, sticky material with ease.

Trackstack
The Trackstack 8042T is a heavy duty, but versatile machine. Featuring a unique “boomerang” design, the feed boot height can be adjusted without altering the head drum position. This ensures maximum flexibility without losing stockpile capacity.

The 8042T can receive material directly from a crusher or screen or be installed in a close circuit application. With its hi-torque drive system this machine can be fed direct by a wheeled loader or excavator (requires fitting of direct feed hopper). It has a production rate of up to 600-plus tph, a stockpile capacity of 2162 m³, and a hi-torque drive and engine size combine to reduce fuel consumption.

Doosan
The Doosan DX530LC-5 is a Tier 4-compliant crawler excavator. To meet Tier 4 emission standards, the 373-net-hp excavator includes a mass airflow sensor and exhaust brake for the engine. An auto-shutdown with an idle time from 3 to 60 minutes was added to help owners save fuel during non-working conditions. The DX530LC-5 has an operating weight of 116,576 lb. and a maximum digging depth of 24 feet. Operators can choose from four work modes. Helping improve productivity is an available intelligent floating boom.

McCloskey International
McCloskey International’s I44 Impact Chamber is built to the highest standards with industry-leading features, including: a wide crushing chamber with large opening and heavy impact rotor; a 4 blow bar, 45.2” wide impact chamber allows high portability while delivering up to 350 TPH; and four-bar vertical lift out quick change hammers that can be used with two high bars and two low bars for high capacity primary crushing. It is designed for a variety of applications, including asphalt recycling, concrete recycling, rock crushing, construction and demolition.

JCB
The JCB 3CX Compact Backhoe is designed to give operators big performance in small areas. At only 6’5” wide the 3CX compact is almost 20 inches narrower than a standard backhoe (attachment dependent). And a near 9′ foot travel height allows this model to access extremely tight spaces. It has a gross engine power of 74hp, a maximum dig depth of 4.33m, an operating weight of 13,380 lb (6070kg), and a peak torque of 381lbf (300Nm).

Volvo Construction Equipment
Volvo’s new 60-ton A60H articulated hauler is built for off-road applications, including quarries and opencast mines. It is built with a 673-hp, V-ACT, 16 litre, six-cylinder straight variable geometry turbocharged diesel engine with four valves per cylinder, overhead camshaft and electronically-controlled unit injectors. It is fitted with active hydraulic front suspension for high hauling speeds in tough conditions, while optimizing operator comfort and stability during travel. The hauler also features an on board weighing system designed to guarantee the optimal load every cycle.

Atlas Copco
The new Dynapac SD1800 CityPaver from Atlas Copco is designed for road repairs and working in built up areas, with a laying capacity of 350 tph for paving widths from 0.70m up to 4.70m. This machine offers many of the technological features valued in Dynapac’s larger SD pavers such as the PaveManager 2.0 software to optimize paving control. The 54kW power produced by the Deutz T3/T4 engine is distributed to the paver functions with minimal power loss ensuring ample power is available to perform highly demanding operations. The Dynapac SD1800’s intelligent control system enables the user to monitor the complete paving process so you can optimize the workflow.

HITACHI
Hitachi’s ZX490LCH-6 hydraulic excavator is built with an Isuzu AQ-6UZ1X 4-cycle water-cooled, common rail direct injection engine with a rated engine power of 270kW. The excavator has an operating weight of 49,300 to 51,200 kg, and a bucket capacity (ISO heaped) of 1.30 to 2.50 cubic metres.

Hillhead 2018
According to the organizers, the newly extended area of the showground worked extremely well and is already oversubscribed for 2018, while the extended registration pavilion also proved very successful, prompting plans for a further significant increase in size in 2018.

To check out videos of some of the products in action at Hillhead 2016, visit www.rocktoroad.com.

Further details and dates for Hillhead 2018 will be announced in the near future.