Roads are an important part of Quebec’s Plan Nord vision 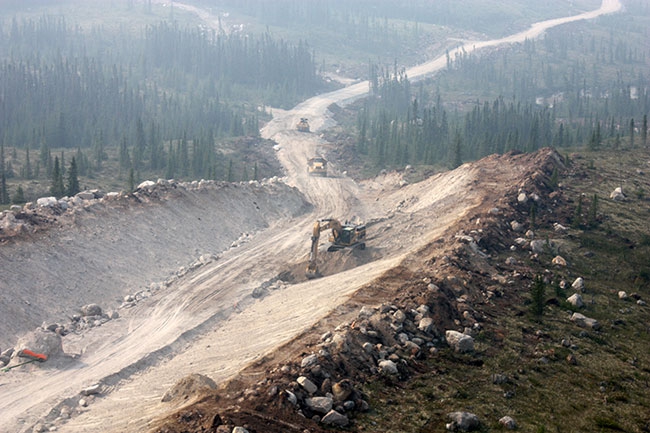 Nine hundred and fifty kilometres north of Quebec City, Stornoway Diamond Corporation is investing $811 million in capital expenditures in the province’s first diamond mine. To provide year-round access, the province and Stornoway divvied up the task of constructing a 243-kilometre extension of Route 167. It was completed in September 2013.

The mine, called Renard, is one of 35 mines that the Quebec government estimates will be operating by 2020.

The government expects more highway projects will be launched to open up northern Quebec under the rubric of a grand vision called Plan Nord. Its goal is to improve access to a vast, 1.2 million square-kilometer territory stretching from the 49th parallel just north of Lac Saint-Jean to just beyond the 62nd parallel at the northern tip of Quebec on the Hudson Strait.

Plan Nord was introduced in 2011 as a 25-year, $80 billion marathon, with $821 million to be spent on transportation infrastructure alone by 2016. An integrated transportation network – roads, airports, railways and ports – was a big part of the plan.

Two elections after the Liberals unveiled Plan Nord, however, it is unclear how much the current government intends to spend on Plan Nord, or on transportation infrastructure in the short or long term.

In June 2014 the government announced $63 million in Plan Nord funding for road infrastructure in its 2014-2015 Budget. The intended uses of the money include pushing the extension of Route 138 along the north shore of the St. Lawrence River, rebuilding Route 389 to Fermont and repairing the James Bay highway.

Whether this is in addition to already-committed funds for these highways is unclear, but if the cost of the Route 167 extension is any guide, $63 million will not butter very many turnips (one source puts the total cost of the Route 167 extension at around $550 million). When asked for a budget breakdown and project details for these three highways, neither Transport Quebec nor the Plan Nord office would provide any information.

Whatever the details, these are clearly three big-budget projects. Take the 138 and 389, for instance.

Transport Quebec has been beavering away at Route 138’s eastward expansion for years. According to provincial maps, it now snakes along the coastline to Kegashka, almost due north of the eastern tip of Anticosti Island. The Plan Nord goal line, Blanc-Sablon, sits roughly opposite the northern tip of Labrador. The completion represents maybe 500, probably many more convoluted construction kilometres along an extremely fractured coastline.

Route 389 is a 570-kilometre driving adventure through the boondocks from Baie-Comeau to Fermont, just short of Labrador City. Nearby is ArcelorMittal’s
giant iron ore mine. The leg to Manac-5, one of Hydro Quebec’s power dams, is paved, but the route is twisty and narrow. The last 250 kilometres to Fermont, referred to here and there as the most dangerous road in Canada, is gravel. The forest grows right to the edges of the road. “The road is terrible. There are potholes and bumps and it gets slippery. Sometimes our trucks can only go five to ten kilometres an hour,” says Jacques Sirois, the president of Lévio Transport in Saint-Appolinaire. The conditions have caused damage to his trucks that include engine and transmission failures, differential and brake damage.

One estimate pegs the cost of repairing Route 389 at $459 million over six years, starting in 2015. The scope of work includes resurfacing, blasting and excavating, clearing forest, new culverts, bridges, quarries … it is a long list.

Road building in the far north has special charms. Patrick Godin, the vice president, chief operating officer and director of Stornoway Diamond Corporation, speaks to the challenges that faced the company and contractors in the building of its 97-kilometre share of Route 167, which Stornoway built, under budget, for $70 million.

“In [Montreal] there is a lot of precipitation and wind speed data for the past 100 years. Up north you have a lack of data. We are in virgin territory and don’t have data on specific conditions. Compensating for unknowns required some over-engineering; e.g., roads built up more and bridges made longer.”

Northern Quebec has vast expanses of flat land peppered with lakes and wetlands. “The region is totally eroded. You can have flash floods and snow melt,” Godin says. “[Stornoway’s section] crossed three kilometres of wetlands, of varying depth. We had to build 17 bridges, one of which is 25 metres long. I think we have four kilometres of culverts.”

The contractor built ice roads in 2012-13 to bring in and stockpile fuel. “The winter road was not a walk in the park. We did not have snow. When there is no snow, you expose the ground. Even at -10 Celsius, the sun will melt the dark ground, [resulting in] mud. With snow you can have a good road. Without snow you have problems,” Godin says.

Crews loaded frozen wetlands with fill where the road would go. After the spring thaw it settled into the wetlands. Godin lists a few of the environmental responsibilities: “Maintaining the hydraulic balance in the wetlands, topsoil, rehabilitation of the creeks and river beds, maintaining the flows in the rivers and making sure fish can pass through the artificial gates we built, and all in record time.”

Noting that this is Cree territory, Godin adds, “[The Cree] are good workers, custom fit for the job, and aware of the challenges.”

The road crosses the Otish Mountains, which added complexity, and lots of snow and ice, to the project, Godin says. “It was a big process to smooth curves and hills. There are a lot of the bridges in this area.”

The contractor built about 16 borrow pits along the route. “They used 2.5 million tonnes of rock in the building of the road,” Godin says. There was a lot of natural gravel along the road, but two mobile crushers crunched more rock. Stornoway spent about $2 million on blasting.

Stornoway also built a 1,494 metre by 30-metre airstrip near the Renard diamond mine site. Michel Grégoire, a civil engineer with SNC Lavalin, describes one of the challenges in its construction. “The site was covered with stones of 600 millimetres to 2,000 millimetres in diameter. The solution was to build over the rocks. The largest stones were broken apart with an excavator- mounted hydraulic jackhammer, and the stoney surface was levelled as much as possible in
order to solidify it and leave as few holes as possible. Then a layer of sand of approximately 1.2 metres [thick] was spread over the rocky surface.”

The next spring the sand was levelled, then covered with coarse gravel and levelled again.

Other challenges face northern road builders. Global warming is an emerging problem. “In the north, global warming is impacting more, because the ground is totally different. The topsoil absorbs water like a sponge and diffuses it into the watershed. We are facing more saturated topsoil and a lot of runoff in the spring. This creates flash floods. We raised the road as a function of this. In the next 25-30 years it will be a factor we have to add,” Godin says.

Plan Nord includes infrastructure projects in areas so remote that they can only be accessed by plane or ship. One priority initiative in the original Plan Nord action plan was to determine the feasibility of a road or rail link from Kuujjuak southward. Located on Ungava Bay, roughly 650 kilometres further north than the Renard mine as the snow goose flies, it is resupplied by ships in the short northern summers.

For such projects, road builders will have to ship and store materials and equipment the year before they need them. This requires meticulous planning. Manpower and training will surely require additional legwork, as one of the goals of Plan Nord is to bring employment and improved prosperity to people in the far north.

Companies traditionally occupied with road building may find themselves doing earthmoving projects alongside companies with specialized port, railway, power line and wind turbine construction skills. To cite just one such possibility, the Quebec government has allocated funds for a feasibility study for a railway that would move ore south from the Labrador Trough to the St. Lawrence.

These are indeed interesting times in northern Quebec.