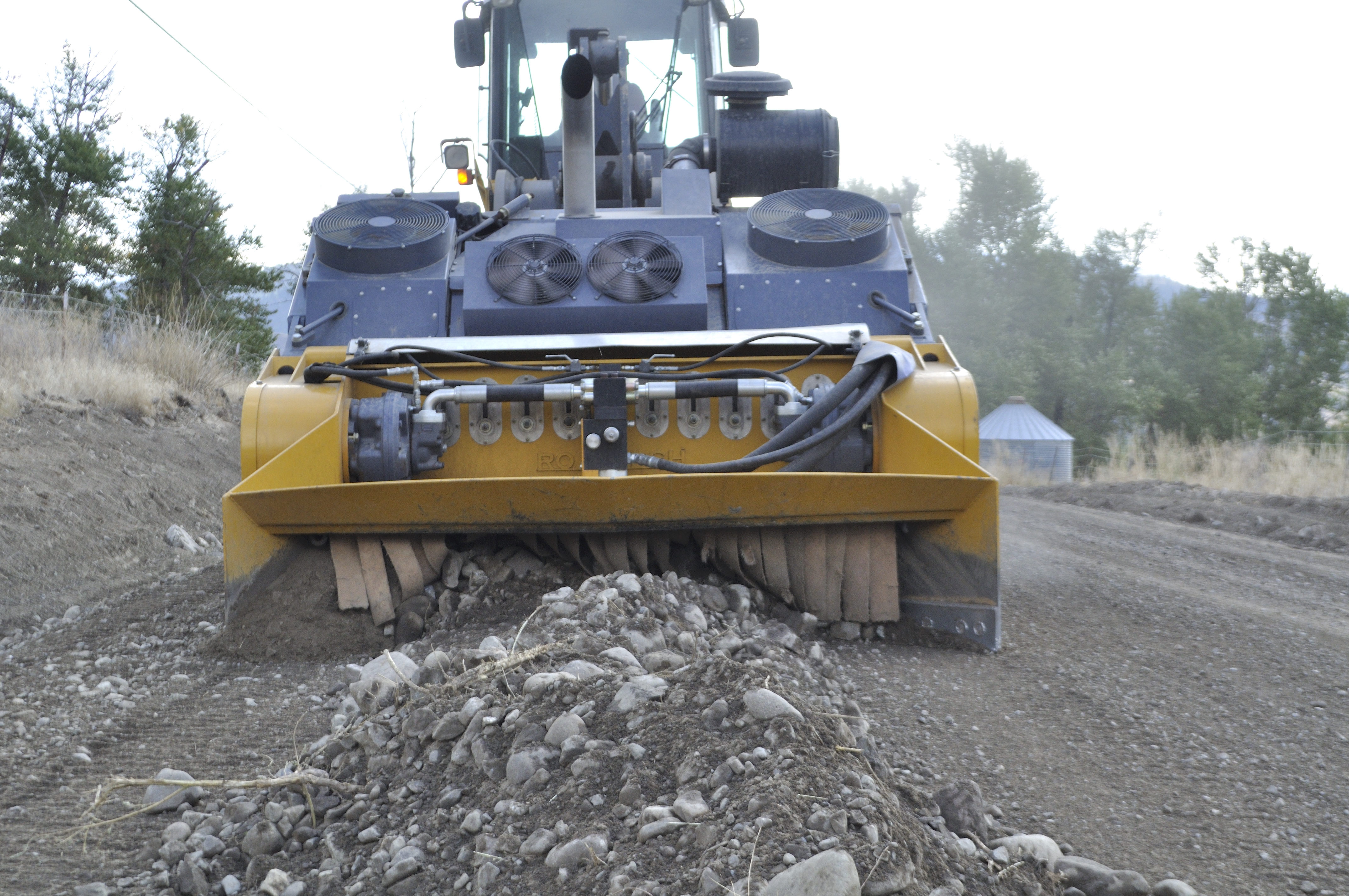 February 26, 2016 – A common gravel road repair and road building approach is to remove oversize rocks and bury subgrade problems, such as potholes or protruding rock, under additional gravel. But this “band aid” approach, which does not deal with underlying problems, is costly. It can require hauling in 200-300 per cent more material than truly necessary to resurface a gravel road, only to have the problems resurface.

About 50 per cent of the cost of any gravel road project comes from hauling in material; and the thousands it costs to get a mobile crusher into a local pit can quickly rise if pit permitting and development is required.

While using a pit crusher makes sense on massive freeway projects and where stringent aggregate specifications for structures like bridges are well justified, there are better, more economic options for gravel roads, particularly remote ones.

Sweet Grass County, Montana depends on good gravel roads for much of its timber, oil, mining, and agricultural transportation. But maintaining these gravel roads was becoming too costly and difficult with traditional pit mining.

“Previously, we used pits or when the haul got too far, we’d push shale rock on the road and run it over with vibratory rollers, trying to break it down to make a drivable surface,” says Cory Conner, Sweet Grass County, Mont. public works director.

Instead of burying near-surface subgrade problems under excess gravel from a pit, a growing number of counties, road contractors, as well as timber, oil, or mining companies are discovering that linear crushers can repair a gravel road for significantly less money, while correcting the underlying subgrade problems.

Unlike mobile rock crushers which are stationary when operating, linear crushers move along the road being repaired, crushing oversize rock along it in a crushing chamber. The oversized rock, existing gravel/crushed rock, and natural fines (soils) are all windrowed together and processed through the crusher in one pass, which leaves the reduced material in place as a stable crushed layer. When used in on-road repair, it can help achieve “aggregate lock”, a natural binding of soil and gravel when wet, that can prolong the life of the road surface beyond that of cleaner gravel from a pit that typically lacks soil mixed in as a binding agent.

Unsatisfied with the traditional approach to maintaining gravel roads and concerned about shortening the lifespan of the county’s vibratory rollers, Conner favored the linear crusher approach. After comparison-shopping and watching demonstrations of two on-road crushing systems, he chose a front loader-based design over a tow-behind design.

“The tow-behind design would’ve required us to buy a dedicated tractor for about $400,000USD, while the Vanway linear crusher works with the front loaders we already have,” says Conner.

Vanway International, a linear crusher manufacturer, makes machines capable of crushing any rock including construction grade rock (110-210 MPa compression strength) such as trap rock like basalt and gabbro, as well as quartzite, granite, and dense limestone.

“The tow-behind also did not blend fines or crushed rock so we would’ve had to do that manually,” says Conner. “The Vanway, however, can uniformly crush rock to the size we need, and blend it with fines so we can just blade it, roll it out, and call it a finished product.”

According to Conner, properly blending fines and crushed rock with the linear crusher is critical for Sweet Grass County to achieve the good gravel road surface sought.

“Without blended crushed rock and fines, you’ll get rock pockets, rocks kicking out, washboard, or potholes,” says Conner. “Half your road will be a muddy mess, half will be nothing but rock because the fines will turn to mud or slime when really wet. When you lay crushed rock and fines in the right blend, you get a good, lasting driving surface that won’t easily dust up, kick off rocks, or allow water penetration and damage to the road surface.”

After purchasing the linear crusher, Conner says that, “We can take existing roads that are wearing out and rehab them without having to open a pit and do a whole DEQ pit process, then the whole reclaim process.”

“Compared to our typical gravel road cost of about $20,000 per lane mile hauling from a pit, we expect to rehab the same road for about $5,000-$7,500 per lane mile with our Vanway linear crusher,” says Conner. “We should be able to do about two-to-three times the road repair we’d done previously with the same crew, while extending the lifespan of our roads and vibratory rollers.”

Travis Clark, Operations Manager for Roadtech, a contract road construction firm based in St. Maries, Idaho, also relies on a linear crusher for cost-effective gravel road repair and construction. “Compared to burying a road’s subgrade problems with gravel from a pit crusher, we can often repair the wear surface and correct subgrade problems for up to 66 per cent savings with our linear crusher,” says Clark.

“All that material that’s been pushed off the edge of the road for years – from ditches, berms, subgrade, oversize – becomes our lift material,” adds Clark. “Our linear crusher usually runs at a cost comparable to a pit crusher, but doesn’t need a pit, have set up costs, or need to be permitted.”

According to Clark, when building remote gravel roads for timber, oil, mining projects, the cost of hauling in gravel can quickly escalate the cost. “The farther away the road from the pit, the higher cost; and the more remote the road, the fewer the pits,” says Clark. “That’s when your price per mile of gravel road goes through the roof.”

“Fortunately, with a linear crusher your price stays constant,” adds Clark. “Without the material hauling cost, it costs the same per mile. This allows our linear crusher to do remote projects for the same price you would pay for a local project.”

According to Clark, the linear crusher has performed well for customers, ranging from logging, oil, and mining companies to county public works departments, that require building or maintaining good gravel roads at lower cost.

Clark relates that for years a timber company in St. Maries, Idaho had been struggling to keep a steep, two-mile stretch of single-lane, gravel road in shape with traditional blading and dust abatement.

“For heavy logging truck use, the consistent 15+ road grade was challenging, the road profile was off, the aggregate was loose, and a big outcrop of rock near the top of the hill required lifting the road profile to go up and over it,” says Clark. “There weren’t enough fines in the road to bind the aggregate together, so dust abatement didn’t work very well.”

The traditional approach to address the challenge would be to haul dirty gravel onto it, but that would have been costly, about $35,000USD per mile of lane including dust abatement, according to Clark.

Instead, Roadtech did the rock hammering, proper grader work, then used the linear crusher to break down oversized material and blend in the fines.

“With the linear rock crusher, we were able to get the fines back in so dust abatement would hold in better,” says Clark. “They’ve been running on that road for three years now, and it’s holding up beautiful for them.”

“Using the Vanway linear crusher, we saved the timber company about $12,000USD per lane mile in gravel road restoration cost, and thousands of dollars each year in road maintenance,” says Clark. “Plus the logging trucks are now able to keep a higher average speed on the road, which has increased work turnaround times on their trucks.”

According to Clark, traditionally the county only bladed many gravel roads with a grader because they lacked the funding to re-gravel them, and a grader’s capabilities are quite limited.

“Traditionally with a grader when you pull out large rocks, it makes a mess, you’ll never get it compacted right again, and you’ll get ruts forming in your road,” explains Clark. “After pulling out the large rocks, you have to cast them over the side of the road, which widens your road and costs more to maintain.”

As an alternative, the county now runs its own grading crew, and Roadtech follows with its Vanway linear crusher.

“With our linear crusher, we can typically re-gravel and rehabilitate from 2-6 miles of gravel road for essentially $36,000USD/week, plus crew cost,” says Clark. “With the traditional way of burying the problem, it would cost over $100,000USD a week for a similar project.”

According to Clark, this approach has allowed Ferry County to put in a new maintenance protocol for their roads. “The linear crusher allows the county to work on roads they would normally have to wait 5-10 years to re-gravel,” says Clark.

Clark explains that the county not only gets to reuse the material on the road, but also gets to correct the road. Essentially this allows the county to pull the big rocks out, and utilize the grader to actually correct the road. This improves the road profile and water drainage, which lowers road maintenance costs, so they don’t have to blade it as often.

Clark compares the use of the linear crusher vs. traditional gravel road repair for typical county gravel road projects.

“With proper subgrade preparation, instead of burying the problem, you can gain an additional three-to-five years of road life. A linear crusher can also decrease how frequently you do general blade maintenance by about 50 per cent,” concludes Clark.