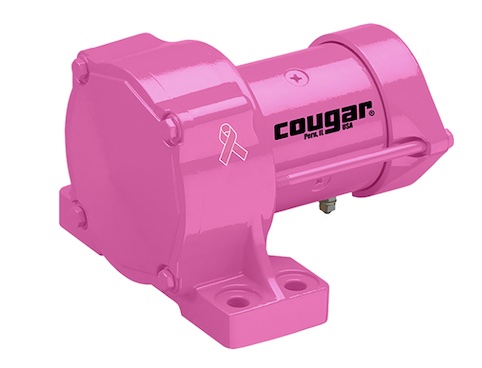 The pioneer in industrial vibration and bulk material handling technologies is announcing this year’s annual program to support breast cancer education, screening, treatment and research around the world.

Continuing its commitment during National Breast Cancer Awareness Month in the U.S., Martin Engineering invites customers to “Go Pink!” for the month of October, along with replacing the traditional Martin orange paint scheme on truck vibrators, the company will add the option of conveyor guarding, Twist Tensioners and inspection doors to Go Pink as well.

“Since 2017, this popular campaign has allowed Martin Engineering to donate almost $50,000 to the Susan G Komen organization,” said Vibration Business Development Manager, Susie Orlandi. “Every contribution supports those in need today, while the researchers continue their work for a cure.

“With over 900 employees worldwide, we’re a family-owned company that is all too familiar with the impact breast cancer has on individuals, families, friends, colleagues and communities,” she continued.  “It affects such a large number of people that just about all of us have been touched by it in some way.”

That’s why this program also garners huge support from the staff.  In addition to its donations, Martin Engineering hosts a team in Komen Peoria’s More Than Pink Walk to raise awareness and encourage individual contributions to this worthy cause.  “Every step is one step closer to a cure,” Orlandi said.  “Whether it’s with the helpline, financial support or assisting patients in navigating their care journey, we trust the Komen Foundation to support patients and families.  Funds go directly to support breakthrough research and provide help for the women and men facing breast cancer.”

Since its formation in 1982, the Susan G. Komen foundation has raised over $3 billion in more than 60 countries.  With a mission of supporting those with the fewest resources, it has helped to reduce breast cancer-related deaths by an estimated 40 per cent.  The organization has played a critical role in virtually every major advance to combat breast cancer – transforming how the world talks about and treats the disease and helping millions of breast cancer patients become cancer survivors.

According to the National Breast Cancer Foundation®, about one in every eight women will be diagnosed with breast cancer in her lifetime, along with thousands of men.  The organization has contributed to several breakthroughs including the identification of genetic links, less-invasive surgical techniques and advanced drug therapies, as well as advocating for more federal funding of additional research and early detection programs.

“Every year, our customers generously join us in this fight, placing orders to contribute to its success,” Orlandi added.  “Programs like this allow the pink colour scheme to represent the cause year-round, generating awareness and getting people talking.”

To further boost awareness, all the Cougar DC Truck Vibrators or Cougar THD Hydraulic Vibrators ordered in October will be painted pink unless orange is requested. In addition, conveyor guarding, twist tensioners and inspection doors will also be included as items customers can choose to order in the pink color scheme.  The conveyor guards protect workers from the hazards of a working conveyor.  Twist Tensioners ensure that conveyor cleaner blades stay in proper contact with the belt to adequately discharge and clean adhered material from the surface.  Inspection doors are attached to sealed chutes and enclosures that contain dust and spillage, allowing workers to safely view bulk handling operations.  These items are prominent exterior components that, when made pink, commemorate lost loved ones and remind people of the ongoing battle against breast cancer.

“Like us, the Komen family has roots in the Peoria, Illinois area,” added Martin Engineering Chairman Ed Peterson.  “It’s a tight-knit community that supports each other, so we’ve always felt a special connection to the cause.  I’d like to think that the midwestern spirit of generosity and community contributed to the success of the cause.”