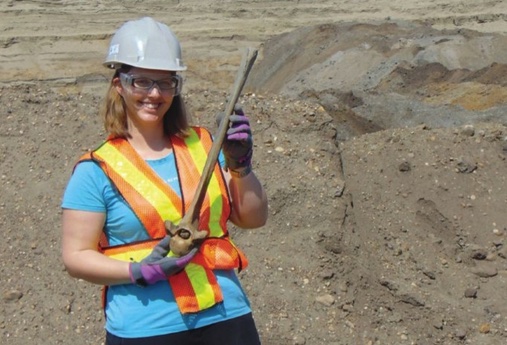 The sand and gravel industry is well known for being a key component for the construction of roads, bridges, hospitals, school and many other types of infrastructure.

But in Alberta, the sector is also known for being the bearers of other another kind of natural resource: fossils. Producers across the province have unearthed a wide variety of Ice Age fossils over the years, in their pursuit of sand and gravel.

To try and ensure those priceless fossils are given a proper home, many producers reach out to Dr. Chris Jass, Curator of Quaternary Palaeontology at the Royal Alberta Museum (RAM). Jass has been overseeing Ice Age fossil collections at the RAM for over 13 years and says the museum’s relationship with the aggregate industry outdates his time there.

“My predecessor started the work with the sand and gravel industry with a fellow named Gene Seal,” Jass recalls. “Gene worked at various gravel pits. He would stand on shaker decks and pull clay balls out to prevent them from gumming up the crushers.”

“One day he noticed bones coming out, so he started collecting them.”

“My predecessor learned that Gene had collected several thousand Ice Age fossils plucking bones out of shakers and conveyors. That material jump-started the growth of collections at the RAM and our institutional work with the sand and gravel industry.”

Turnover in industry and at the museum led to a bit of a lag in the 2000s, but when Jass joined the RAM in 2008, he considered rebuilding that relationship a priority and received a lot of interest from various producers including Lafarge Canada, Lehigh Hanson and Mixcor.

“The first meeting I set up was with Lafarge. I was just out of my PHD and I thought, well, everyone is interested in fossils. I remember going out to their office in Edmonton. I brought a couple fossils with me, and there were eight people there including a legal team,” Jass recalls. “I was like, oh, this is serious.” 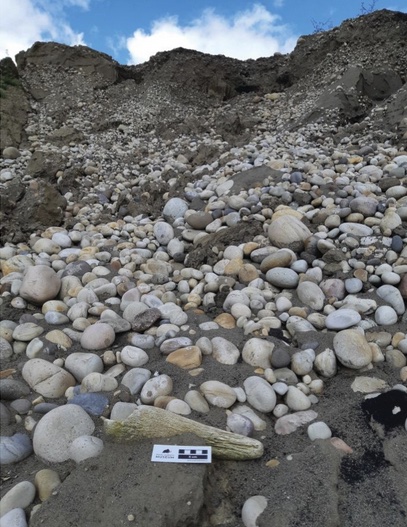 The Royal Alberta Museum has always taken a cooperative approach to working with the aggregate industry to discover Ice Age fossils.

Industry had concerns about the implications of finding fossils, as they do not want their efforts to recover fossils to adversely affect operations. That said, all fossils discovered in Alberta are Crown property and there is a regulatory obligation to report finds.

“Our role as an institution is to try and ensure when material is found, it makes its way to the public realm to preserve it as a heritage resource,” Jass says. “One of the questions I always get asked from industry members that are concerned is, ‘If we find something and report it to you, are we going to get shut down?’ Essentially what I say to them is, ‘If you found an Ice Age bison bone, do you think, as a researcher, I’ll never see another piece of bone coming in from a gravel pit if you are shut down?’”

For this reason, Jass has always taken a cooperative approach to working with industry to discover new fossils. Whenever a producer finds something they suspect to be a new fossil, they typically set it aside and reach out to the RAM, which will send someone to inspect and collect the specimens.

“In Alberta, there’s lots of Ice Age fossils thinly distributed across all this gravel,” he says. “The only reason we’re seeing those fossils is because industry is putting blades in the ground and are exposing this material, which hosts Ice Age fossils. As a researcher they’re doing me a favour. We wouldn’t find many of the fossils otherwise.” 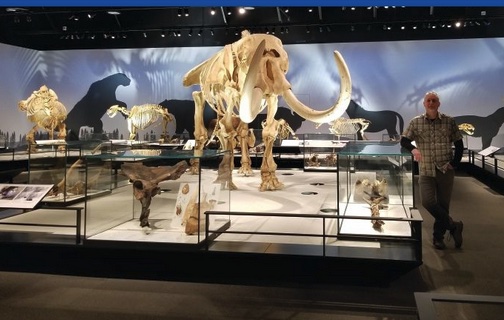 Between half and two-thirds of the Ice Age fossil collection at the Royal Alberta Museum is a direct result of working with Alberta’s aggregate industry.

Jass says that while the number of fossils discovered this way changes from year to year, it is always substantial.

“Between half and two-thirds of our collection is a direct result of working with the aggregate industry to recover Ice Age fossils,” he says. “There are some pretty amazing specimens that have come out of the gravel. We have a complete American lion jaw, with teeth intact, that indicates that Alberta had big cats of equivalent size to African lions
until 10,000 to 12,000 years ago.”

“With carbon dating, you have a limitation when the age determination method is no longer effective,” explains Lafarge Canada’s Bill Gowdy, environment and public affairs manager for Northern Alberta. “The oldest fossil we have had was one bison skull which came out of a pit northeast of Edmonton that’s on display at the museum that’s around 45,000 years of age.”

Brock Helm, land manager for northern and central Alberta for Lafarge Canada says operations he has managed over the years have unearthed a lot of fossils in northeast Edmonton and east of Drumheller, Alta.

“We’ve been down at the Drumheller site with the RAM and University of Calgary. We’ve found some pretty nice prairie dog fossils on the order of 30,000 years of age,” Helm says, adding that he’s also found some unique ancient fossils of possibly a camel, rhino or horse.

“We find fossils every time we go down there. It takes a little bit of scouring but if you know what to look for you can find them.”

As exciting as it would be to discover an Ice Age fossil while working a screener or crusher, how exactly would an employee know what to look for?

To help with this challenge, Jass regularly invites producers to bring their staff to the RAM to check out the collection.

“I love to get people into the collections and start opening drawers and cabinets and showing them exactly what we look for, that’s the best scenario,” he says. “In lieu of that, we will sometimes contact sand and gravel operations and have a look at their site and show them the kinds of things we’re looking for.” 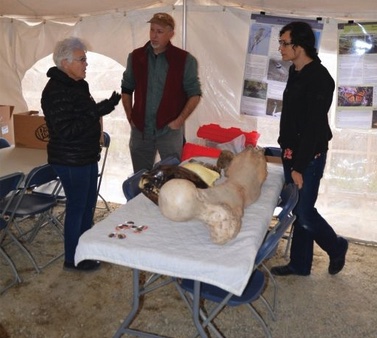 Dr. Chris Jass, Curator of Quaternary Palaeontology at the Royal Alberta Museum, at an outreach program to show off some of the RAM’s Ice Age fossil collection to the public.

Sometimes distinguishing what is an Ice Age fossil in the rural areas that sand and gravel operations typically operate within can be particularly challenging.

“Ice Age fossils don’t look any different than what you see in a farmer’s field. They’re actual bone, they’re not petrified. It’s the context that’s important,” Jass says. “A bone that looks like an old cow bone but came out from under 15 feet of gravel, that could be something different – maybe an Ice Age mammoth or bison bone.”

Gowdy says he has taken members of his team at Lafarge Canada out to the view the RAM’s collection multiple times.

“We’ve taken them into the museum to see the collection on field trips. It’s just really cool for the guys to see. It makes them more cognizant to watch for things, which furthers the collective knowledge of Alberta’s fossil record,” he says. ”It has been an absolute pleasure, an education and interest for all of our people, in collaborating with the RAM. The association has not adversely affected production whatsoever, and we have all learned so much.”

The RAM has also engaged with industry by participating in outreach events, like when producers host open houses for the public.

“One of the reasons I’m so keen with engaging industry is that the reality is we live in a pretty massive province and there are not very many of us that do this type of work. So, the more eyes we have on the ground looking for stuff like this, the more fossils we’ll see coming into the collections and allowing us to do cool science and tell the story of Alberta’s natural heritage,” Jass says.

While a large, significant historical find might warrant a brief pause on an operation every once in a while, Jass believes strongly in work with industry to accommodate both sides – like possibly requesting short-term avoidance of a small portion of an operation where fossils were found while producers continue working other parts of their sites.

“Because of the Historic Resources Act, fossils and archeological remains are considered Crown property and we all have a responsibility to preserve those pieces of history,” Jass says. “But we also have to be realistic and recognize we need to work in a cooperative way. In my opinion, Alberta serves as a really good model for other jurisdictions.”