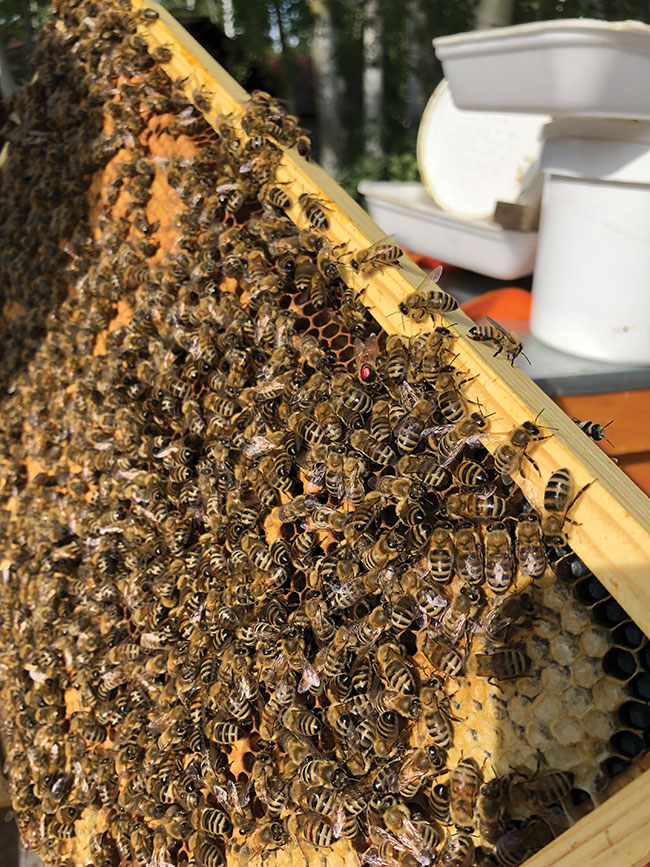 A recent pilot project has been generating serious buzz in northern Alberta.

The Fort McMurray Bee Project began in 2018 with funding from the Western Economic Diversification Fund provided by the Government of Canada for a two-year pilot project.

Led by the Acden Vertex Limited Partnership, a North American provider of environmental and industrial services (out of its offices in Fort McMurray, Alta. and Sherwood Park, Alta.), the company wanted to establish two bee hive operations (apiaries) in the Lower Athabasca Region: one in Fort Chipewyan and another on an industry site having recently undergone or requiring reclamation work in the near future. The purpose of the two-year project was to be the start of a larger effort that would expand in scale throughout the oil sands region in an effort to improve reclamation programs.

The idea originated from Dean MacKenzie, vice-president of environment at Vertex, who saw the potential to create a new opportunity for his First Nation partners at Acden (an Aboriginal partnership between Athabasca Chipewyan First Nation and Vertex) to help address several different key issues at once using honeybees.

“Food security is an issue up in very remote northern communities such as Fort Chipewyan and there’s a desire to have a greater local work force active in reclamation and environmental monitoring,” MacKenzie says. “Just thinking about all these things together—and of course, this is when oil and gas prices were all down—I had thought that maybe there’s an opportunity to enhance food security, create business opportunities for our partners while making environmental monitoring more efficient.”

One of the fallbacks with large land disturbances is that large land bases typically get a lot of wind pollination and that itself can promote a more grass dominated system if plants (such as wildflowers and shrubs) depending on insect pollination are not abundant, MacKenzie explains.

“So we thought, well why don’t we use honeybees to pollinate wildflowers and shrubs that could give them a competitive advantage? And at the same time, we could provide an opportunity help train and teach local community members within the Athabasca Chipewyan First Nation (ACFN) how to become apiarists and they could produce their own honey,” MacKenzie says. “With their expertise and beekeeping they could then take that skillset and turn it into a business by providing food, pollination services or environmental monitoring to industries within the region such as oil sands mines, aggregate mines or other industrial disturbances that would benefit from honeybees.”

Pollinators might also be an efficient means for monitoring the environment.

“The bees collect pollen from within a five-kilometre radius from the hive and plants and bees interact with the air, the soil and the water,” Mackenzie says. “It was our intent to maximize this with honeybees—so you can have food security and improvement in land reclamation through pollination services but you could also create job opportunities, training opportunities and even a monitoring opportunity to monitor the environment efficiently.” 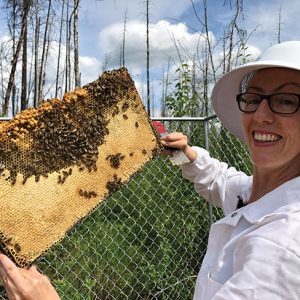 Courtenay Clark, environmental scientist with Vertex, shows off some of the honeybees and thier honey production. 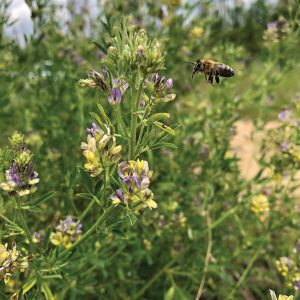 In addition to honey production, pollinators might also be an efficient means for monitoring the environment. Photos courtesy of Vertex and Lafarge Canada. 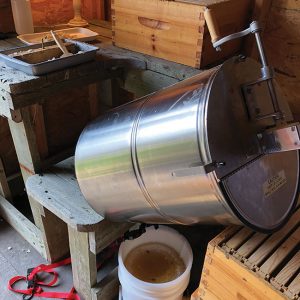 MacKenzie presented the opportunity to the ACFN council and they approved the idea. From there, Acden Vertex was able to obtain the Western Economic Diversification Fund grant for the pilot project.

In May 2018, Acden Vertex helped successfully set up its first apiary in Fort Chipewyan with the community members. The apiary grew and produced honey in August 2018. The program included an introduction to beekeeping training program that generated interest in the surrounding community.

“If you’re not trained properly, and if you’re not keeping up with the maintenance, it’s easy for your hive to get disease, starve or swarm (which means that it’s overpopulated and something is wrong in the hive)” MacKenzie explains. “If the bees are gone, then likely their rate of survival up north wouldn’t be so good.

Local residents were given the opportunity to learn about beekeeping, reclamation and environmental monitoring as they cared for the bees throughout the season.

“We trained ACFN members through the funding and I will say that it was very successful. We had good attendance and now they have their own apiarists. They’re making honey on their own right now” MacKenzie says.

“The boreal region is a challenging location to keep honey bees, so the success in Fort Chipewyan provides positive reinforcement that bees can be kept in other parts of the region,” adds Bill Gowdy, environment and public affairs manager in northern Alberta for Lafarge Canada, which joined the Fort McMurray Bee Project in 2019.

Lafarge Canada joined as an industry partner and provided a second site to expand the pilot project with a focus on the reclamation of a decommissioned gravel pit in the Fort McMurray area located near the Fort McMurray Airport.

“Lafarge is keen on biodiversity, pollinators, education and reclamation. So, for us, it was a pretty obvious fit to participate in some manner in the project,” Gowdy says.

While aimed at improving reclamation programs, Gowdy says this project has the potential for much more.

“With the partnership of industry, bees managed by First Nations, under the guidance of Acden Vertex can become an integral part of the reclamation process, environmental monitoring and local food security across the oil sands region and close to First Nation communities,” MacKenzie says. “Being mindful of cost efficiencies, the hives also have potential to be economically self-sustaining considering product sales and low input costs.” 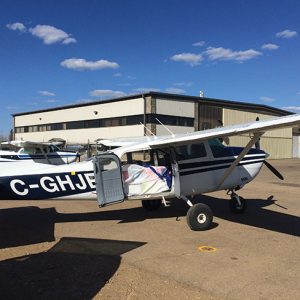 Lafarge Canada joined as an industry partner and provided a second site to expand the pilot project with a focus on the reclamation of a decommissioned gravel pit in the Fort McMurray area located near the Fort McMurray Airport. 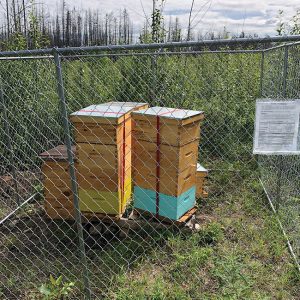 Due to hungry bears in the area, the hives at Lafarge Canada’s gravel pit were only on site for about a month-and-a-half. 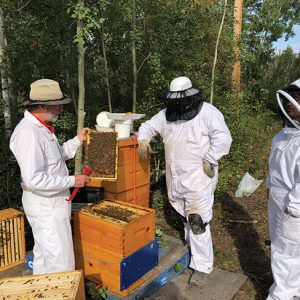 Buzz in the pit
At the Lafarge Airport Road gravel pit, Acden Vertex established four hives along the edge of the pit. The location offered the best chance of success, with hives would be placed in low-traffic areas to reduce potential for disturbances while still easily accessible. They were inspected twice a month to adjust the hives’ setups to ensure proper space and sufficient food sources were available.

“Hives were placed within five kilometres of nectar and pollen sources, such as willows in the spring or fields of wildflowers later in the summer,” Gowdy says. “In this particular case, there is a lot of new growth for pollination in particular associated with the devastating 2016 For McMurray wildfires. Hives were located in an area that is undergoing revegetation and reclamation activities.”

Although the four hives were placed in a low-traffic area, the project did encounter some traffic of hungry and furry variety.

“We had some bear issues. Bears do like honey, and they’re not as cute as Winnie the Pooh,” MacKenzie says.

Due to the bears coming to the site looking for a snack, the hives were only in Lafarge Canada’s gravel pit for about a month and a half. But the production in that short period of time was impressive.

“We had 130 pounds of honey and the hives were only there for six weeks. We put them in on May 30, when it became necessary to pull them out prematurely on July 17, with the continuing bear activity” Gowdy says. “I don’t think anybody would have realized we’d get that much honey. It was a terrible year for bees. Production in most apiaries were down 50 per cent in 2019, with the unusually cold and wet year, so that, for me, this was a success.”

Lafarge Canada ended up purchasing all of the honey from Acden Vetex.

“There’s a source of revenue from this. I think that speaks big to how this can be sustainable,” MacKenzie says.

“No pun intended, but we spread it all over the place,” Gowdy adds. “Our employees, managers, and even our executive committee received honey from the project. It was really well received. It’s a great little good news story for our people: demonstrating environmental sustainability and showcasing how industry can work with other stakeholders.”

Future expansion
Vertex is exploring potential new opportunities to do similar projects with Lafarge Canada on other sites in the coming years.

Considering the success of the first two pilot projects, despite the colder climates of northern Alberta, Gowdy wonders what the limits of success for a project like this could be when establish on a site farther south with warmer weather and increased agricultural activity.

“In the boreal forest it’s not like you’re around a lot of farmland with crop pollination by any stretch of the imagination,” he says. “We are really interested in this—the pollination of the plants to help facilitate reclamation on the site so you get improved growth, more seeds, and the ultimate reclamation of your site as well, when you’re done mining.”