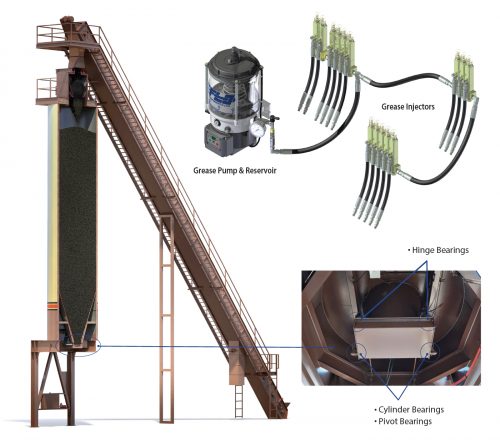 FLO Components, based in Mississauga, Ont., is working with several asphalt companies to install Automatic Lubrication Systems (ALS) on their asphalt storage silos.

“At an asphalt plant, a truck drives underneath the silo and the asphalt is dropped into the truck body, which is then trucked to where the paving crew is laying down the asphalt,” said FLO Marketing Specialist Gabriel Lopez. “The silo has a door or ‘gate’ at the bottom, which has to be able to open and close repeatedly as the plant fills the trucks. The hinges or bearings on these gates must be properly lubricated because a stuck gate can be catastrophic.

“If it gets stuck closed, you have a truck underneath that cannot get material to transport over to the asphalt crew and everything stops. Even worse, if the gate gets stuck open, it will empty the entire silo of very hot asphalt into the truck (overfilling), onto the ground and typically even onto the scale. The truck has likely pulled away. Hopefully, nobody has gotten hurt, but you are left with a lot of clean-up and potential environmental and safety issues, and again, all paving stops.”

The company says there are serious costs and major downtime associated with a stuck silo gate. According to Lopez, the costs incurred if a piece of paving equipment breaks down on the job and forcing the crew laying down the asphalt to stop production can be more than $2,500 per minute. A stuck gate would similarly shut down that lay down crew, incurring the same costs or more if repairs and clean-up are required.

FLO’s solution is to use an automatic lubrication system (ALS) to lubricate the four main points of the gate. The ALS is a self-contained grease lubrication system that typically gets mounted on one of the support structures or I-beams of the silo. It is a fully monitored system, with a grease reservoir and 120V pump at ground level, a single supply line running up to a distribution valve mounted underneath the silo, and heat-resistant feed lines running to the bearing points. Operation of the ALS is tied into the start of production and is programmed to run on timed intervals. The pump comes on periodically and a small measured amount of grease is sent into the individual bearing points, while the silo is operating.