KPCL always on the lookout for the right fit 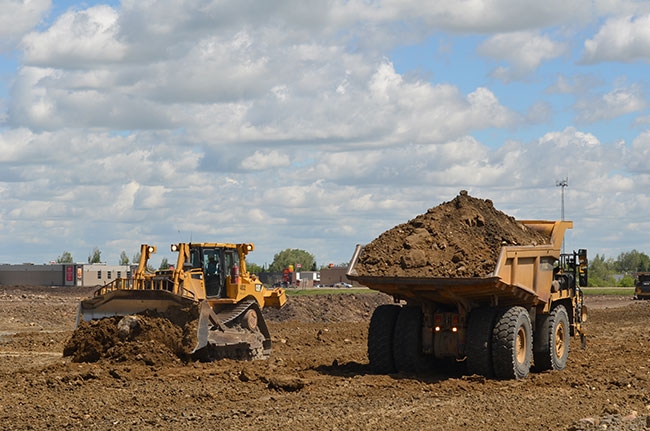 October 3, 2017 – When it comes to a company the size of Kelly Panteluk Construction Ltd. (KPCL), keeping it staffed with qualified and competent people comes with it some challenges. The Estevan, Sask. based company is one of the largest privately-owned heavy equipment earth moving and underground services companies in Saskatchewan. It currently employs 240 people and employed upwards to 300 during its busiest season on record.

KPCL’s busiest seasons took place from April 2015 to December 2016 during the CP Rail Belle Plaine Railway Spur project, where CP Rail had entered into a long-term service agreement with K+S Canada for moving potash to market from the company’s legacy mine near Findlater, Sask., via 30.5 kilometres of newly constructed railway over to the Kalium Spur near Belle Plaine, Sask.

After a competitive bidding process, KPCL was selected as the general contractor for the project. The scope of the project included managing and constructing the new rail grade, including a 108-metre-long steel girder and precast span bridge to cross the Qu’Appelle River; a multi-plate steel tunnel structure to carry municipal traffic over the railway spur; and the building of the railway grade that included approximately 12 million cubic metres of earth excavation and 11 million cubic metres of embankment construction across farmland and the Qu’Appelle Valley.

“It was the largest project in the history of the company with the company purchasing some larger pieces of equipment to scale up for it,” says Mary Panteluk, vice-president of human resources for KPCL, adding that they still have some staff on the CP site performing clean up operations. “This year won’t be as busy as the previous two, we’ve had a lot of competition come in from other provinces.”

Finding and retaining 240 people for projects across the province can be a big challenge. To help fill positions for KPCL’s contracts in northern parts of the province, the company recently expanded its operation to include a satellite office in Saskatoon. Rock to Road recently met up with KPCL’s vice-president of human resources in Saskatoon to discuss the challenges of finding the right fits for positions within the company.

The right applicants
With the resource market down, Mary says there has been no shortage of applications coming into her office. That said, quantity of applicants doesn’t always ensure that you’ll find the right person for a position.

“It’s always a challenge to find an experienced scraper or grader operator,” Mary says. “There have been more applicants with excavator experience applying lately.”

One of the ways applicants are tested to see if they are a good fit with the company is through the use of a behavioural-based survey. These are used to help assess how safe an operator will likely be on a jobsite.

“It helps us identify what to expect from their natural risk behaviours – for example are they prone to cutting corners, wanting to make decisions instead of taking direction?” Mary explains, adding that it is also a useful tool for assessing an individual’s skills coming in and whether they can be expected to work well under certain supervisors.

When they do find an applicant that is safety conscious and has an attitude that seems like a good fit for the company, KPCL is willing to invest in them even if the applicant doesn’t possess all of the necessary skills or have a lot of experience. KPCL offers equipment training performed by in-house staff to new hires and current employees looking to expand their knowledge base and scope of duties. This can be a big advantage for people who may not have had the opportunity to pursue post-secondary education.

“We do offer that advantage if you want to do the work in heavy construction – there’s no educational barrier,” Mary says. “Having a four-year university degree is not a requirement to be a skilled heavy equipment operator as experience is developed in the seat of the machine, not the classroom.”

Looking overseas
To ensure the company has enough experienced operators in its arsenal, Mary has had to search overseas for a good fit for their operations; although this has not been necessary the last few years.

“We participated in some international recruitment in Ireland in 2012 and 2013,” she says. “At the time, we didn’t have a process set up for receiving [international] applications, so that took some time to develop. The first step was getting KPCL online so applicants from abroad could learn about the company.”

In addition to recruiting workers from overseas to help fill shortages in particular positions, Mary also has to watch the ratio of overseas workers compared to Canadian hires.

“Less than 10 per cent of our workforce can be international,” she says. “Keeping the company in compliance is part of my duties.”

Marijuana legalization
One of the issues that Mary and her brother, Riley Panteluk, are always keeping a keen eye out for are operators potentially under the influence of alcohol and/or other intoxicants. Outlining that “while alcohol and drug testing is a condition of employment, you still need to ensure that everyone is reporting fit for duty.”

“We hold our people accountable,” Mary says, adding that the coming legalization of marijuana is an obvious concern for her company when it comes to managing heavy equipment operators that may use the drug, even if they are off-duty.

The federal government announced that it is decriminalizing marijuana as of July 1, 2018. This is especially concerning for companies that employ heavy equipment operators, since the impairment effects from marijuana can last long after the drug has left a user’s system.

Future staffing challenges
Due to the company’s geographic location and the type of work they do, their ability to hire and retain staff will always be challenged when the resource market, specifically oil, is strong.

“Competing with the oil patch’s resources for employees can be really challenging,” Mary says, adding that construction companies in Saskatchewan simply cannot match the dollars offered by big oil.

To help prevent the oil patch from taking away skilled operators, KPCL offers its employees quality work sites and accommodations for those employees that work a fair distance from their homes.

“We offer site accommodations within 10 minutes of a jobsite and provide fresh, hot meal services from our camp kitchens,” Mary says. “At the end of a 12-hour shift, that’s what most of our crews want. It saves someone having to go home, get groceries, and cook and clean up after working a long shift.”

Another item that KPCL tries to set up for its employees, whenever possible, is internet service, which is considered vital to its younger and older employees to ensure they can remain connected with family and friends.

Even when trying to accommodate employees as much as possible, you’ll always have a few that just don’t work out.

“You’ll still have people who will say ‘yes’ at the get-go then the next week want to leave,” Mary says, adding that the younger generation of workers sometimes struggle with adapting to working within a weather-dependent operation. “Sometimes we
encounter three or four days of rain on someone’s scheduled days on, and you need to adjust to that and be flexible… that’s the industry we’re in. It’s can be challenging for the younger generation to adjust to the seasonality of the work and the weather.”

A family affair
Mary and Riley, are part of the third generation of the Panteluk family to continue in the family business.

Riley and Mary’s grandparents, Walter and Janet Panteluk, originally started as Panteluk Construction Company Ltd. in 1953 with a single dozer and a vision to help build Saskatchewan. Their grandfather started out performing site prep for oil fields and creating access roads and dugouts.

By the 1970’s, Kelly Panteluk had joined his father’s business and learned the ins and outs of the industry before starting up KPCL alongside his father’s company in 1984. By the late 80s and early 90s, Kelly’s company was working on dam construction and spillways for SaskPower. In the early 2000’s, KPCL was doing a fair share of its projects in Manitoba, working on floodway water control projects and constructing large berms. Since 2008 the company moved to work its way to central Saskatchewan, working with the potash industry on improving storage for tailings management (tailings are a waste product created during the potash mining process). Now the company works across the majority of the central and southern parts of the province with offices in Estevan and Saskatoon.

As the company took on larger jobs, its fleet grew accordingly. Today, the company has between 225 and 250 pieces of heavy equipment in its fleet, including Trimble GPS-mounted dozers, graders and scrapers. The majority of the company’s big iron is of the Caterpillar brand – the newest and largest pieces include CAT 777 haul trucks – although KPCL does own some John Deere tractors as well as some Kenworth trucks for hauling.

Passing the torch
Although Kelly is still very active within the business, he has been slowly handing over various responsibilities to Mary and Riley.

In addition to overseeing the hiring at KPCL, Mary acts as liaison between KPCL’s field and head office operations by standardizing administration processes. She also runs the company’s marketing program and manages its website.

Riley is the vice-president of operations and provides leadership and direction to KPCL’s teams of supervisors, foreman and mechanics at its various job sites. He has worked with the company for more than a decade managing earth moving projects across the province.

Although a formal plan has not been set as of yet, the Panteluk siblings are being prepared to takeover the company for when Kelly decides its time to hang up his hardhat.

“As far as a family succession plan goes, it’s still in the works,” Mary says.