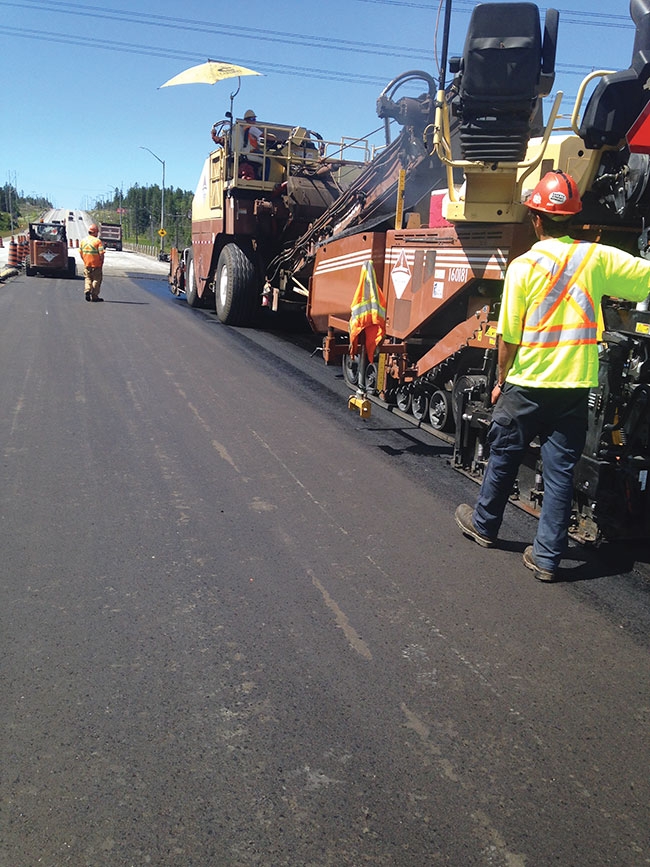 Photos courtesy of City of Timmins.

Thanks to a new round of provincial funding, the City of Timmins will move ahead with the next phase of its highway reconstruction plan, however financial concerns continue to plague the long-term project.

Known at various points as Algonquin Boulevard and Riverside Drive, Highway 101 serves as a main thoroughfare for the city as well as a provincial highway. The 21.35-kilometre stretch features both two- and four-lane sections running through the city of Timmins and sees approximately 30,000 vehicles per day. In recent years, however, the road has fallen into disrepair; deteriorated culverts, cracked road surfaces, and potholes are common along the route.

In a 2016 AECOM report, the Highway 101 reconstruction project was estimated to cost $95.5 million over 10 years, however that figure has since risen to
$120 million. Its core focus will be the replacement of aging culverts and damaged road surfaces as well as critical infrastructure underneath the highway, such as water and sewage systems. City officials also plan to widen the road’s shoulders and install streetlights in certain areas to accommodate pedestrians, remove an overpass that has fallen into disuse, design an alternate crossing for snowmobiles, level out flood-prone sections of the highway, and potentially install a median in one portion of the road.

Earlier this year, the Ministry of Transportation of Ontario (MTO) announced that it would provide the city of Timmins with $3 million to repair Highway 101 through the Connecting Links program, a fund that supports the renewal, rehabilitation and replacement of provincial highway and bridge infrastructure passing through a community or leading to a border crossing. The Connecting Links fund covers 352 kilometres of highway and 70 bridges in 77 municipalities throughout Ontario, with Timmins’ 21.35-kilometre stretch of Highway 101 being the longest Connecting Link in the province.

In addition to this year’s funding, Timmins also received $3 million through the Connecting Links program in 2016, the maximum amount available per project per year. The city was passed over in 2017, however Timmins chose to move ahead with its reconstruction plans, funding the project on its own due to the urgent need for repairs.

“What we’ve been doing over the past couple years is chipping away at the smaller phases with no services underneath the road,” explains Timmins Mayor Steve Black. “The main stretch of the highway, which goes through the downtown, urban part of the community, those phases are much higher in cost and we don’t see ourselves being able to do them with a maximum funding of $3 million in any year from the province; so we’re trying to patch things up there and hold off in hopes that the province will come out with a larger program to access for funding.”

So far, the City of Timmins has completed reconstruction on approximately 2.5 kilometres of the 21.35-kilometre stretch, Black says, in addition to installing streetlights along a portion of the road to improve pedestrian safety. This year, the mayor was pleased to hear that Timmins would receive its Connecting Links funding, however with the program’s funding cap still in place, Black worries that the city’s plans for reconstruction will continue to fall behind schedule.

“If the funding plans don’t change from the government then it’s going to be a significantly longer project,” he explains. “When you take a program that has a $3-million maximum… that obviously adds up to a lot more than 10 years.”

This is not the first time the Timmins leader has been vocal about Connecting Links funding. Though it was briefly halted in 2013, the program returned in 2015 after public outcry over a shortage in funding for such projects. At the time, MTO dedicated $15 million to the fund, a sum that Black criticized as inadequate to cover the needs of rural and northern communities. Since then, Connecting Links’ overall budget has grown to $30 million. However, with a $3 million funding cap for individual projects still in place, Black and other city representatives are working to persuade MTO to increase the maximum amount of available funding to $6 million per project in order to tackle larger portions of the Highway 101 reconstruction.

“We’ve had some good discussions with the ministers over the last couple years of the importance of allowing us – because our Connecting Link is such a massive project and can’t be done under the Connecting Links program alone – to allow us to tap into some of those other infrastructure programs and pool our money toward our critical priority project in this case,” says Black.

For now, MTO senior media liaison officer Bob Nichols confirms that the ministry routinely reviews its program criteria and the maximum amount of Connecting Links funding remains $3 million per project per year. With respect to Highway 101 in particular, Nichols writes: “We understand the city’s connecting link plans include more than road rehabilitation. Items such as sewer and water and recreational trails are outside the scope of the existing connecting link program. We encourage the city to seek out potential funding programs offered by the provincial and/or federal government.”

The Timmins mayor is doing just that. For more expensive sections of the project, Black is working to tap into additional government funding programs. In addition to Connecting Links, the city has also applied for the Ontario Community Infrastructure Fund (OCIF), a fund that assists with the development and renewal of infrastructure in rural and northern communities.

A recent bilateral agreement between the federal government and the Province of Ontario could also assist the City of Timmins in completing Highway 101’s reconstruction. The agreement, signed earlier this year, is expected to provide Ontario with $11.8 billion in infrastructure funding over the next 10 years, including up to $250 million dedicated to infrastructure projects in rural and northern communities. On the heels of the provincial election, few specifics are available regarding the bilateral agreement, however the government of Ontario is expected to provide its federal counterpart with an infrastructure plan under the agreement by September 30. For now, Black is optimistic that the announcement will lead to additional funding opportunities.

“We’re hoping that there’ll be more money in that pot when it officially gets rolled out so that we’ll be able to apply for larger sums of money in a single year so that we don’t have to keep going in four- or five-million-dollar increments for this project,” he explains.

In the meantime, Black intends to use this year’s Connecting Links funding for road reconstruction between the Bruce Avenue Y and Legion Drive east of downtown Timmins as he continues to seek additional sources of funding for the project.