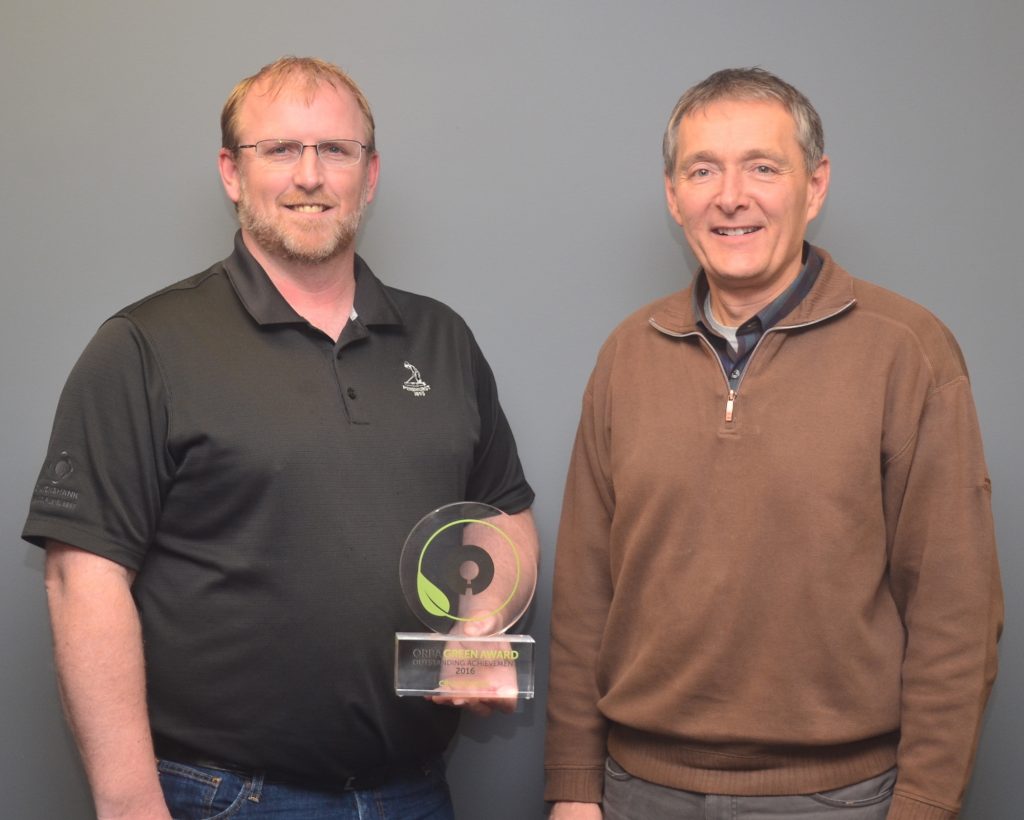 Steve Cruickshank, CEO of Cruickshank Construction, and Jason Makin, vice-president of materials and logistics, pose with the company’s 2016 ORBA Green Award for Outstanding Achievement for the company’s anti-idling initiative.

May 10, 2017 – Three years ago, Cruickshank Construction had a real problem with its idling time. In August 2014, the Kingston, Ont.-based company’s fleet was running upwards of 40 per cent idle time. Jason Makin, vice-president of materials and logistics with the firm knew this was not a sustainable practice, so he began researching ways to improve operator efficiencies.

Makin found a solution thanks to telematics reports he was receiving about his fleet from VisionLink data that was provided by Toromont CAT, which included the idling times of all of the company’s big iron.

“So we implemented a program to reduce idling time to 10 per cent,” explains Steve Cruickshank, CEO of Cruickshank Construction, adding that the program made sense both environmentally and economically.

“We originally focused strictly on loaders, since we have more loaders than anything else,” Makin recalls during an interview at Cruickshank’s head office in Kingston. “We looked at those for about a month-and-a-half and then decided we needed to branch this out and look at everything; because loaders as a percentage were about 30 per cent of our entire fleet, and we had the opportunity to do it on everything so why stop there.”

“The gentleman that looked after the loaders [Scott Wood, general manager of materials] was in the office right next door to Jason so we were able to communicate with him quickly and easily; and he transferred the information out into the field and we ended up getting results very quickly on something that everybody was saying we couldn’t do,” Steve adds.

Starting in August 2014, the company decided it would set a goal to reduce its fleet’s idling times to 10 per cent by the following spring. There were 54 pieces of equipment involved in the program, including loaders, excavators, dozers, backhoes, dump trucks, soil compaction equipment and pavers.

“There were lots of discussions on getting to 10 per cent idling time,” Makin says, adding that many operators were saying that it couldn’t be done.

To try and reinforce the company’s new anti-idling program, Cruickshank regularly discussed the program in its internal communications.

“Some of the operators were hitting 10 per cent on a monthly basis, some of the guys were trying their hardest but couldn’t get there due to the nature of the work,” Makin says. “Everybody was trying, there was definitely effort. It was a topic of discussion in the management group – it always came up in discussion and received attention all the way to the operator level. We were identifying operators as the high idlers and the low idlers.”

To help boost interest in the program, Cruickshank turned the anti-idling initiative into a contest for the operators; which was a contributing factor to operators taking the initiative seriously. To keep the spirit of competition alive and well during the program, daily, weekly and monthly idling reports were released. Operators were awarded a “Top Operator” t-shirt for achieving a 10 per cent idle time on an equipment group for a month. At the end of the year, the company reviewed all of the operators’ idling times, identified those with the lowest idle times in each category, and awarded them $250 bonuses.

The initiative was a complete success and now the company looks forward to viewing its VisionLink reports from Toromont, which place the fleet’s idling times between eight and 10 per cent.

“In one-and-a-half years we changed a cultural behaviour,” Makin says.

By the time spring 2015 rolled around, Cruickshank Construction had met its goal of achieving a 10 per cent idling time overall. The company reduced its GHG emissions by 153 tons and enjoyed an annual fuel savings of approximately 57,000 litres.

In recognition of the company’s successful anti-idling initiative, the Ontario Road Builders’ Association (ORBA) awarded Cruickshank Construction with the 2016 ORBA Green Award for Outstanding Achievement at ORBA’s 90th Convention and Annual General Meeting, which took place this past February in Toronto.

“The award is the icing on the cake,” Makin says.