An update on B.C.’s Highway 1 projects 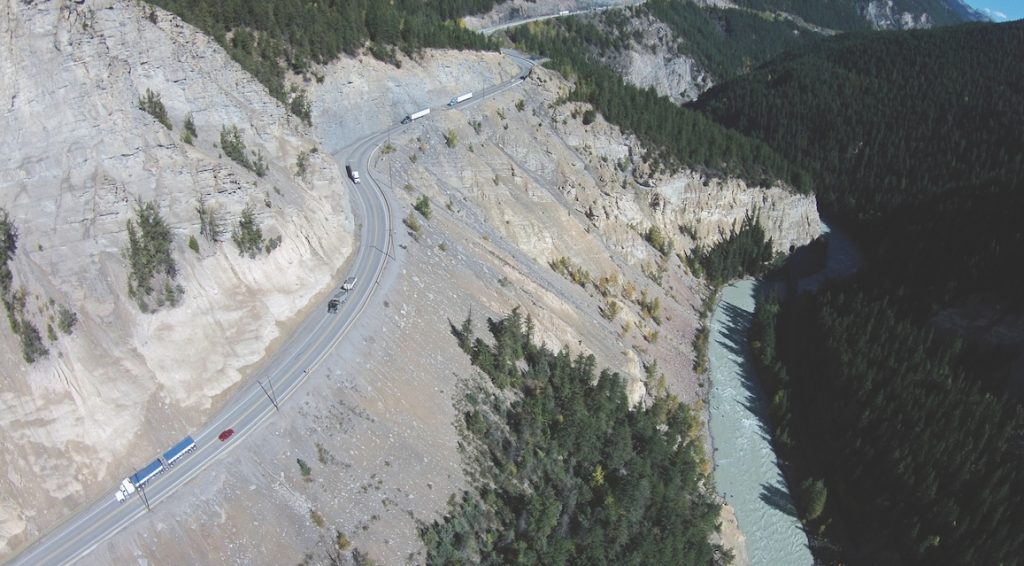 A drone shot taken in September 2015 of the final phase section of Kicking Horse Canyon. The final phase includes constructing about 4.5 kilometres of new highway and building retaining walls and rock catchment ditches through a very steep and challenging section of the canyon. The final leg of the project is still in the design stage. Photo: Government of B.C.

February 15, 2017 – The section of Trans-Canada Highway that runs from Kamloops, B.C. to the Alberta border is an engineering marvel that winds its way around impressive mountains, across rivers and through many small communities, connecting British Columbia to the rest of the country.

However, for planners, contractors and engineers looking to upgrade the 440-kilometre thoroughfare to a modern, 100-kilometre-per-hour four-lane highway, it poses a real challenge.

There are steep grades, sharp curves around rock bluffs and narrow bridges to contend with. Blasting and scaling are difficult due to steep mountain slopes. The weather is ever changing and contractors and work crews must deal with re-routing traffic as they go about their work. And, oh yes, did I mention the ever-present threat of avalanches and landslides?

“The mountainous terrain has been a challenge for us, obviously, because there are a lot of waterways and bridges along the highway route,” says Murray Tekano, director of major capital projects for the British Columbia Ministry of Transportation and Infrastructure. “The majority of our projects have bridge components, so they’re challenging. “When you’re developing projects and selecting a route you have to think about whether you should realign the highway or widen it where it exists. As you can imagine, the reasons are complex. In some cases, it is very technical because of conditions and the terrain.”

The highway is the primary east-west connection through B.C. and a vital route for travel, tourism and trade. It is being upgraded to four lanes so that traffic can move more safely and efficiently and commercial vehicles can transport their products to ports.

A long-term investment
The B.C. government has been working on projects along the highway for a few decades now. In 2012, the province committed $650 million to projects along the highway and, subsequently, in its 10-year transportation plan in 2015, called B.C. on the Move, announced it would increase the total investment in the corridor to more than $1 billion with funding from the federal government.

Since 2001, a total of 12 projects have been completed along the corridor. They have included highway widening and other road improvements, construction of interchanges, and bridge replacements. There are seven projects under development and one under construction.

One of the projects completed was widening a 10.5-kilometre section of highway to four lanes at the Monte Creek interchange, about 30 kilometres east of Kamloops. The $68.9-million project was completed in two phases, with the final stretch of asphalt laid in 2016.

Another completed in 2016 was replacement of the Malakwa Bridge and four-laning of 2.7 kilometres of highway about 20 kilometres east of Sicamous.

One project now in the works is the replacement of the 58-year-old North Fork Bridge over the Perry River, between Revelstoke and Sicamous. It is the last remaining bridge along the highway with a metal truss overhead. The new bridge will have four lanes. A 3.5-kilometre-long section of highway is also being widened to four lanes and a paved centre median is being added for driver safety.

Greg Kyllo, MLA for Shuswap, says he’s pleased to see work ready to begin on the bridge. Construction is expected to start this fall and be completed in 2018.

“It’s great that we’ll have crews out this year already on this four-laning project for Highway 1 that will be especially beneficial to residents and the large number of tourists and commercial drivers travelling through the region,” he says.

Projects at Kicking Horse Canyon, which consist of improvements and widening to four lanes between Highway 95 at Golden and the western boundary of Yoho National Park, have posed particular challenges for engineers and contractors because of steep rock faces on one side and a drop-off to a CP Rail line and Kicking Horse River on the other. The 26-kilometre section of highway has not had major upgrading since it was built in the 1950s.

Tekano, who is the official overseeing the four-laning project for the Transportation and Infrastructure Ministry, says the second phase of the Kicking Horse Canyon undertaking was especially difficult because it involved replacing the 405-metre-long by 90-metre-high Park Bridge and upgrading about 5.8 kilometres of highway approach.

About 2.5 million kilograms of structural steel, enough to manufacture more than 1,900 cars, and 1.5 millon kilograms of rebar used in footings and piers were used to build the bridge along with 20,000 cubic metres of metal mesh over the slopes to reduce the chance of a slide.

During peak construction of phase two, there were 175 workers on site. More than 2.8 million cubic metres of earth was moved, enough to fill a bumper-to-bumper lineup of articulating off-road dump trucks stretching from Regina, Sask. to Vancouver. About 50 million kilograms of asphalt, enough to fill 500 railway cars, and 12,000 cubic metres of concrete, enough to provide basements and steps for 350 houses, was also used in phase two.

The final phase of the Kicking Horse Canyon project includes constructing about 4.5 kilometres of new highway and building retaining walls and rock catchment ditches through a very challenging section of the canyon. The final leg of the project is still in the design stage.

“Kicking Horse Canyon has probably posed the most challenging piece of technical engineering in Canada,” says Tekano. “The last four and a half kilometres remains the most challenging pieces of TransCanada highway left to be replaced. It’s very steep terrain, with high rock cliffs and variable rock conditions and significant avalanche areas so all these have to be accommodated in the design and they also influence the actual construction.”

Importance of Highway 1
The highway project is not the biggest the B.C. government has on the go just now, but Tekano says it’s important because it’s vital to Alberta and the rest of Canada and the Transportation and Infrastructure Ministry wants to ensure that the roadway is safe, as the highway is used by thousands of drivers each day.

“Billions in goods are moved through the Trans-Canada Highway corridor annually and to our ports,” he says. “The Trans-Canada is a key link between the western provinces and our Pacific Gateway.”

“The Kamloops to Alberta border four-laning program is important to British Columbia because the Trans-Canada Highway is one of our most important trade and tourism routes – it’s our province’s vital economic link to the Alberta border and the rest of Canada,” Stone says. “This route sees up to 12,000 vehicles per day, 15 per cent of which are heavy trucks carrying between $24 billion and $32 billion per year in commercial goods. It also connects communities and provides access to many beautiful and diverse recreation areas.”

However, B.C. NDP leader John Horgan has complained that the Trans-Canada project is proceeding too slowly. He has been critical of B.C. Premier Christy Clark for failing to take action and suggests that, at the rate it is going, it will take 70 years to finish the project.

“Modernizing B.C.’s most important connection to the rest of Canada has not been a priority for the B.C. Liberals. I want get moving on this work, and we can’t afford to wait for Christy Clark. The safe, smooth movement of people and goods is vital to economic growth, new jobs and new opportunities for apprenticeships and careers in construction.”

Horgan says the pressing need to improve the Trans-Canada was made clear last fall when a rock slide that injured two workers resulted in the highway being closed in Yoho National Park.

“The highway was shut for three whole days and drivers were forced to make a 100-kilometre detour,” he notes. “Delays and accidents like this can be minimized if we do the work.”

However, Transportation and Infrastructure Minister Stone says the government is moving ahead by committing with the federal government more than $980 million since 2001.

“We recognize there’s still more to be done,” he says, “and remain committed to continuing advancing four-laning projects along the corridor to increase safety for those who live on or travel along the corridor, and will help ensure goods can get to market efficiently.”

Tekano says while there are challenges, the highway project is proceeding. He notes that the second phase of the Kicking Horse Canyon project, for example, a large project, came in 21 months ahead of schedule.

It’s not unusual, he says, for projects along the route to be at different stages, with one being started while another is finishing. As a result, there is usually planning and engineering work underway for one project while another along the highway is being built.

“It’s very much a progressive program and while it’s been a major challenge the industry is rising to meet that.”