The ambitions of a Newfoundland construction company 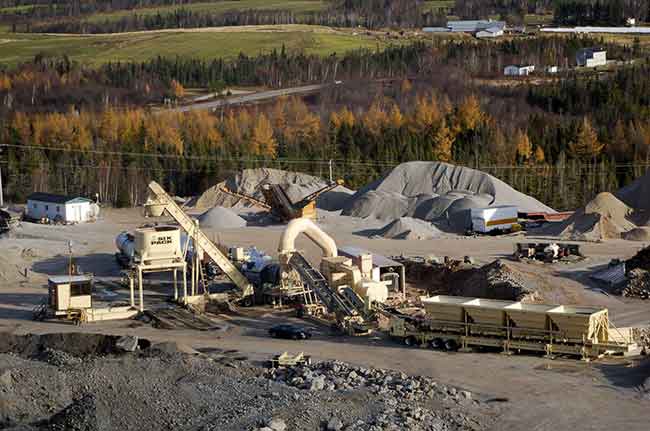 July 7, 2016 – Since its early days doing residential projects with a single truck backhoe and a dozer, Conception Bay South, N.L.-based Farrell’s Excavating Ltd., has grown to become one of the top five asphalt producers on the island. And asphalt is not all they do.

Farrell’s Excavating is a going business. It quarries and processes 500,000 tonnes of rock a year, on average, from its St. John’s quarry alone, it operates two mobile asphalt drum plants, it can pave up a storm (2,880 tonnes in one day is its record) and its fleet of tractors and trailers move other companies’ heavy equipment the length and breadth of the Rock and across the Strait of Belle Isle to Labrador.

Their employee figure hit a high of 130 last year, with 40 being full-time jobs, and the rest are seasonal positions.

Owner Billy Farrell, and vice-president, Roger Butler, started the company in 1991, and incorporated it in 1992. Farrell’s is located on the outskirts of St. John’s in Mount Pearl. Here, the government leases quarries to companies, which is how it’s done in these parts. “All quarries in Newfoundland are leased from the government on 25-year leases. They give us quarry rights. In the St. John’s area, they set aside a district for quarries and lease out blocks to contractors,” Butler explains.

Farrell’s started out with 18 hectares, mined it out, then bought a couple of quarries from contractors that weren’t doing so well. Their entire quarry is active, and they are digging hard sandstone around 20-25 feet deep.

The company runs an Elrus mobile crusher, which can produce 250 tonnes an hour of 3/4-inch road gravel. If it needs to munch rock out on a job site, the Elrus breaks down into seven truckloads of crusher equipment, supported by three truckloads of loaders.

The biggest of Farrell’s eleven loaders – the company mostly favours loaders over conveyors to feed the Elrus – is a CAT 980. The rest includes CATs ranging from the 950 to 980 models, and a John Deere 444. Its 12 CAT excavators range from a 305 mini-excavator to a CAT 345.

In addition to its finer crushed products, the quarry supplies rock right up to armour stone (loose boulders ranging from six to eight tonnes apiece). For instance, Farrell’s supplied 40,000 tonnes of armour stone and 88,000 tonnes of blast rock for a ground station in Seal Cove, in Conception Bay South – part of the Muskrat Falls hydroelectric project.

This year Farrell’s is busy supplying 25,000 tonnes of rock to Pennecon Heavy Civil for a wharf project in St. John’s harbour.

Farrell’s has also grown a strong asphalt business, but it was tough going, Butler says. “We had a lot of challenges. None of it came easily. Every time we tried something, there was a roadblock. Right off the bat, trying to get quarries. When we got into asphalt, we did a lot of homework.”

To meet the demand for asphalt, the company runs two mobile asphalt drum plants. The big one is an Astec Six Pack, with a 350 tonne/hour capacity. The small one, a Nomad plant, has a 120-tonne/hour capacity. The asphalt plants spend some time in the quarry, and some on job sites if they are more than 150 kilometres away, or if the project size warrants. “For a small job we take the Nomad. A lot of highway projects here are five, six, seven thousand tonnes, and for these we take the Nomad.

Farrell’s uses two CAT asphalt spreaders: a CAT AP600D with a screed 8 feet to 16 feet wide, and a CAT 1055, with a screed of 8 feet to 20 feet. “Most of our paving equipment is CAT,” Butler says. The company will take on any job, from paving driveways to the Trans-Canada Highway (TCH).

One TCH project on the books for this year is a mill and fill of a 50-kilometre stretch from Portugal Cove Road to Salmonier Line.

A recent emergency project Farrell’s completed last November demonstrates its versatility as an asphalt-laying, aggregate-supplying, road-building machine. An old culvert crossing the TCH at Kelly’s Pond, near Butterpot, had collapsed, necessitating weeks of detouring traffic. After three weeks of planning, a crew of 20 pounced on a Friday evening at six o’clock, with a strict deadline to complete the repair by seven o’clock Monday morning.

Working in 12-hour shifts, first they dug a trench 75 feet wide, 20 feet deep and 200 feet long, and removed the old culvert. Then, using a 250-tonne crane, they placed two bolted-together 100-foot sections of 12 by 16-foot in diameter culvert, weighing 10 tonnes per section, in the trench. Then they backfilled, paved and had the highway ready to reopen 12 hours ahead of schedule.

The company’s transportation arm is made up of a fleet of low-bed trailers and five tri-axle Western Star and International tractors. Most of them are powered with 500-550 horsepower engines. “We haul a lot of big equipment; for example, D8s, 769 rock trucks, and 773 rock trucks. Since the Muskrat Falls project started up, Farrell’s has been moving a lot of gear up to the top of the Rock, onto a ferry, across the Strait of Belle Isle and then over 500 km of gravel road to Muskrat Falls.

Other transportation gigs include moving everything from booms, man lifts, graders, excavators and loaders to an offshore oil production platform under construction at Bull Arms. They have been feeding that project – one of their biggest – for three years, and have a year and a half worth of hauling to do before it is finished.

Then there is the nickel processing plant under construction in Long Harbour. “The site has been on the go for years now. It will definitely be another two before it becomes fully operational,” Butler says.

There have been challenges in this past quarter century, including the inevitable ones that competitors throw down, the never-ending search for someone willing to sell them their quarry lease, and even the odd moose strike. “It’s almost impossible to get a quarry now because they are all taken up. The only way to expand is to buy out someone else’s lease,” Butler says. But of the quarter decade climbing the ziggurat, Butler sums it up like this: “We’ve had lots and lots of fun along the way.”