News
Diverting Waste from the Landfill

September 14, 2011
By Network for Business Sustainability

September 14, 2011By Network for Business Sustainability 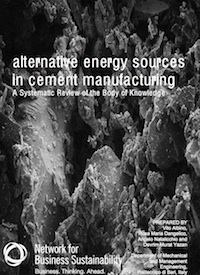 Sept. 14, 2011, London, Ont. – A study released by an independent
research centre reveals using household garbage, tires and even plastic
to manufacture cement would produce fewer greenhouse gases and reduce
the amount of waste sent to landfill than the fossil fuels currently
used.

Sept. 14, 2011, London, Ont. – A study released today by an independent research centre reveals using household garbage, tires and even plastic to manufacture cement would produce fewer greenhouse gases and reduce the amount of waste sent to landfill than the fossil fuels currently used.

Conducted by the Network for Business Sustainability, a non-profit research group based at the Richard Ivey School of Business, the study reviewed the last 10 years of academic and industry research.

“From the reviewed documents, we found it could be better to burn municipal solid waste rather than burning coal to manufacture cement,” says Rosa Maria Dangelico, a post-doctoral fellow at Politecnico di Bari in Italy and one of the study’s co-authors. “Doing so could lead to some environmental benefits, compared to the use of fossil fuels, such as reduction in the quantity of waste going to landfill and decrease of air emissions responsible of global warming, such as carbon dioxide.”

The findings confirm what environmentally progressive countries like Germany, France and Belgium have known for years. Cement plants in those countries get a third of their fuel from sewage sludge, waste wood, used tires, and household and industrial refuse.

Public resistance to alternative fuels typically focuses on the toxins released and their negative impacts on human health. While it’s true that incinerating car tires and plastic products releases harmful pollutants into the air, cement kilns burn at such high temperatures – up to 1,450 degrees Celsius – that most of toxins are burnt before they can be released into the air. Also, any residual compounds are often absorbed into the cement itself.

“It’s counter-intuitive that burning waste products such as used tires could somehow be better for the environment or human health than our current model,” says Tima Bansal, a professor of management at the Richard Ivey School of Business and Executive Director of NBS. “But it speaks to the importance of academic research in shaping decision-making. Environmental issues can be easily overwhelmed by rhetoric, so our business leaders and policy-makers need objective, reliable research to inform energy and health policies.”

This research study is an example of a “systematic review”, one of the most rigorous forms of academic analysis. With their origins in medical research, systematic reviews synthesize all the available research on a topic. They distill the findings using transparent keyword searches and document the process so subsequent research teams can replicate the results. The Network for Business Sustainability has conducted six such systematic reviews to date.

The research was supported in part by the Cement Association of Canada (CAC). The study was subjected to a double-blind review by academic and industry experts in alternative fuels and cement. The CAC and its member companies actively support and are committed to ongoing research of alternative fuel sources in the cement manufacturing process in order to reduce greenhouse gases (GHG) and reducing its carbon footprint.