From hauling to producing in southwestern Ontario 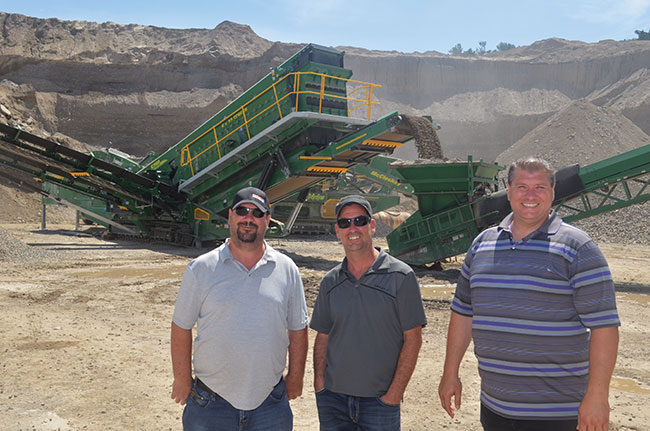 Derek, Chad and Trevor Kropf’s family business, DINO Trucking, has come a long way since their parents bought their first dump and started hauling aggregate in southwestern Ontario in 1975.

Dean and Carolyn Kropf’s family business, DINO Trucking, has come a long way since they bought their first dump and started hauling aggregate for southwestern Ontario producers in 1975.

“Carolyn and I started out with one dump truck in Stratford, Kitchener and Waterloo,” Dean recalls during a tour of his gravel pit in Petersburg, Ont.

The couple operated with a single hauler for five years before deciding to expand the business.

“He was the first person in Ontario to own tri-axles to haul maximum payloads,” adds Chad Kropf, one of Dean and Carolyn’s three sons (Derek, Chad and Trevor) who now operate the family business.

In 1989, the company made a significant investment on the producing side of the business, purchasing its first Powerscreen Commander equipped with two side stackers and a larger stacker. In 2002, Dean and Carolyn purchased a second gravel pit in the New Dundee, Ont. area. Then 10 years later, expanded again, purchasing the Petersburg pit along with an S190 3-deck, McCloskey screening plant.

“We started here seven years ago,” Dean says, referring to his company’s most recently acquired pit. “I was here running it for five years before retiring. Derek, Chad and Trevor have been running it ever since.”

All three sons got into the family business at a young age, obtaining their licenses as teenagers. Derek has been working in the family business for 25 years, while Chad has put in 24 years with the company, and Trevor and has been there for 21 years. When Dean decided he was going to retire, the company already had a succession plan in place for the transfer of ownership over to his three sons that was implemented over a 15-year-period. Dean wanted to make sure the company would turn a healthy profit before handing it over to his sons. To help prepare his sons for taking over operation of the family business, Dean had Derek, Chad and Trevor run the business for the winter months starting in 2004. Since the three brothers took over the company, it has grown exponentially. 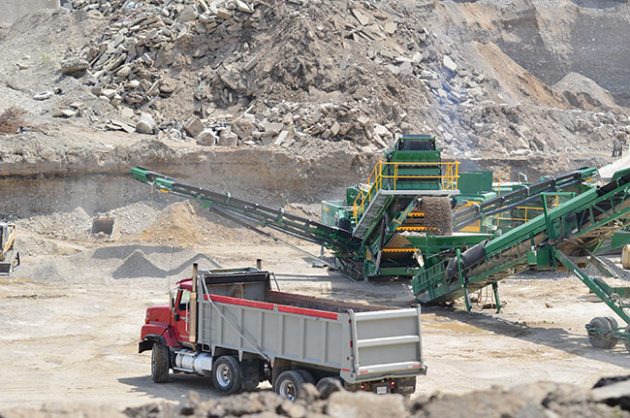 The company currently crushes year-round, as long as the temperatures are -10C or warmer in the daytime, and screens in the summertime. It typically has production volumes ranging from 350,000 to 400,000 tonnes annually.

“The company, 10 years ago, was one-fifth of the size it is now. We’ve really grown,” Chad says.

To ensure the company had the right technologies in place for optimizing production, the three brothers travelled to Las Vegas three years ago for CONEXPO-CON/AGG 2017. It was there they first saw the McCloskey S250, which caught their attention. He and his brothers were so intrigued that they all flew to Ireland to see the S250 live in action.

“It’s a new machine, so it’s more reliable. It’s also a lot bigger spread so we get a lot more tonnage through,” Chad says. “Size-wise, it’s 30 per cent bigger, so we’re definitely getting more product out of it. If we ran over 70 per cent [with the old plant], it would flood. The new machine is longer and wider. It definitely carries more on every belt. We can load the jaw up to 85 to 90 per cent without flooding the deck.”

Chad says he’s now happy with the current size of the operation, and has no plans for anymore expansion in the near future. In peak season, the company has upwards of 15 employees. Dean and his sons all agree they have good people, but they still have their hiring challenges. “The crew we have is great,” Chad says. “But it is hard finding new guys that meet the expectations that our guys already meet. It’s hard, long days, pretty dusty and seasonal. It’s hard to find qualified drivers.”

Fortunately, they have some key employees that have been around for a long time. In 1980, when Dean bought the second truck, his brother, Byron, drove it. “He is still driving loader in the pit today,” Dean says. “Our second-longest employee would be Leon, our shop mechanic, who started in 1988.”

Although Dean and his brother ran the haul trucks, they’re not the only people Dean credits with the successful startup and growth of the family’s second-generation business.

“I always say that without Carolyn’s help looking after the kids this may have not happened,” Dean says. “She always did the bookwork and helped answer the phones.”