A new plant design incorporates a wealth of experience 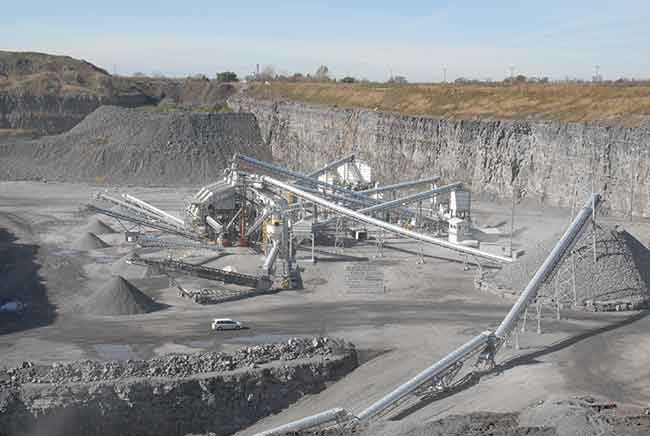 Production has begun at the new Construction DJL aggregate plant in St-Philippe, Que.

December 23, 2015 – No more dust, no more water usage and extensive safety features. These are among the ambitious goals Construction DJL adivision of Eurovia (Vinci group) set for its new automated aggregate plant, which the company began operating this fall in St-Philippe, Que.

The plant, which will process between 500,000 and 600,000 tonnes of limestone annually, reflects the years of experience that DJL has accumulated, according to Julien Antech, lead of plants and quarries at Construction DJL. It also reflects the company’s insistence that the plant be built its way.

“Our goal is taking something that is not normal and making it normal. We gave our suppliers forty pages of special specifications. They are like a resume of all the experience in Eurovia we have to date,” Antech says.

The $12-million plant, the company’s biggest investment in the province, replaces a plant built in 1978 that DJL bought and moved to St-Philippe in 1982 – the year it opened the quarry. It is located at ground level, but the new plant is strategically placed 130 feet below ground level on the quarry floor. Aggregate will be stockpiled on the quarry floor, but in a few years conveyors may be built to move aggregate to the surface for stockpiling. Customers descend a 900-foot, 10-degree ramp, paved for better winter maintenance, into the quarry to fetch their loads.

DJL will work the quarry to the east, nibbling away at what Antech says is another 50 years worth of reserves.

The heaviest smashing is done with an 800-t/h-rated Sandvik JM1312 primary crusher, currently situated in a 40-foot deep pit where a Euclid 40-tonne truck feeds it rock from above. From there, crushed rock is moved by conveyor to a huge stockpile – enough to provide four hours of reserve – covering a concrete tunnel.

Like in an hourglass, the rock pours through a hole in the tunnel roof onto two Syntron electro-mechanical vibrating feeders that supply the next conveyor, which in turn leads to the plant proper.

The new plant includes a cat’s cradle of conveyors, Syntron feeders, an HSI secondary crusher, rated at 500 t/h, and an HSI tertiary crusher, also rated at 500 t/h. There are four Tyler high-frequency screens for fine product, an 8-ft by 24-ft scalper screen, three 8-ft by 20-ft final product screens and more. (Much of this equipment was built by KPI-JCI.)

Beloeil, Que.-based Simar-Dacon, fabricated the 3,600 ft worth of conveyors and their support structures. They have several notable features: First, DJL specified that all of the steel be hot-dipped galvanized, not painted. While an unusual specification, Simar-Dacon took the plunge. Not only did the company learn that hot-dipping costs about the same as painting, it decided, based on the experience, to adopt hot-dip galvanizing as one of its own basic specifications.

“Galvanizing is much easier to handle than paint. It is a very good thing for everybody, especially in Quebec,” says Simon Rouleau, president and owner of Simar-Dacon.

All of the structures are bolted, instead of welded, except where disassembly is not needed. Bolting is more labour intensive on the installation end, but less expensive to disassemble, should that be required. Bolting also means less worry about vibrations causing cracking than with welded structures.

Simar-Dacon fabricated galvanized steel covers for the conveyors. They serve two functions: to reduce wear and tear on the conveyors due to weather, and to act as part of the dust-collection system. Simar-Dacon also built and attached a walkway along one side, and a tourne-de-tête around the end of every conveyor, so the motors can be easily inspected.

The walkways are part of the plant’s safety strategy, which includes the mandate that every part of the plant must be accessible by foot. No cranes, no ladders, no lifts. “These are our standards. With Eurovia, our goal is to go to zero accidents,” Antech says.

Another nice touch is the use of rack-mounted chutes at the opening of the screens. They can be rolled back to allow easier access to the screens. “We worked a lot with the access of the plant,” Antech says.

Safety around the conveyors extends to installing brightly painted guards around the roller ends and pulleys. There are security shields on many other places in the plant too – wherever there is rotating equipment that workers could conceivably come into contact with. “We had to modify and put on the security screens ourselves,” says François Lussier, operations advisor at DJL.

Another example of the amount of thought put into safety can be found at the secondary crusher. Instead of the more typical method of having to reach into the crusher to set the gaps for the four, 400-lb hammers with a wrench, workers need only work a hand crank mounted outside the crusher to adjust them.

A simplified lockout system will also improve safety. Instead of the usual, elaborate system of locking out equipment breaker by breaker, DJL has divided the plant into five zones, each with its own colour: yellow, blue, green, red, and purple. The equipment is distributed among the five zones, and each is labeled according to the zone to which it belongs. An electrician need only perform one colour-coded lockout to shut down a zone.

Production has begun at the new Construction DJL aggregate plant in St-Philippe, Que.

Richard Paquette, the CEO and majority owner of Candiac, Que.-based Manuquip, adds, “Every time you are in a plant like this, if you shut down one component, it shuts down a lot of other components as well. The sequence knows what components to shut down, based on previous analysis.” He also notes, “Many parameters, such as temperature, rotating speed, and amperage are being monitored. With this system, designed and installed by Electro Kingsey, we can count the number of hours of each component and have alerts when it is time to do preventive maintenance. This plant really truly will be unique, in Quebec, and probably unlike anywhere else in Canada.”

Paquette continues, “Every component has an IP address. It is quite new in our quarry business.” Take, for example, the pull cords that run the length of each conveyor. If a worker tugs on one, that conveyor will immediately stop. “With an IP address, if a pull cord is pulled, the operator can tell which conveyor it was pulled on,” Paquette says.

A very noticeable feature of the plant will be the absence of clouds of dust. The old plant had a pretty good dust collection system, but it also relied on 128,000 cubic metres of water a year to suppress the dust and separate the fines, that is, wash the stones. The new plant has a better dust collection system and uses air to separate dust from the rock.

A Fisher Industries air separator, the second for DJL, will separate the fines. DJL specified a Brunone Canada dust containment system. “We will attach all the ducts to the Brunone system, which is the interface between the conveyors, crushers and the duct system,” Antech explains.

A 150-horsepower, 40,000 CFM bag house pulls air from the conveyors and the impact bed/rock box junctions, which are covered and closed, through ducting designed, built and installed by Saint-Laurent, Que.-based Dynagroup Technologies.

Five years ago, DJL began selling the limestone dust to farmers. This practice will continue, with annual sales expected to be between 15,000 and 20,000 tonnes a year.

DJL has built this plant to last at least 30 years. Minimizing dust contamination will increase the durability of components such as bearings and motors, improve heat dissipation and reduce conveyor tracking problems caused by dust buildup on pulleys and idlers.

DJL specified extra-robust components, including CEMA D6 idlers, with bigger shafts and bearings, on the conveyors. Conveyors over 250 ft long have hydraulic tensioners that eliminate three pulleys and six bearings apiece, for fewer maintenance problems. The more powerful conveyors have ceramic lagging head pulleys for less slippage and less required tension. “We have very specific specs on the belts; for example, abrasion resistance, [and] thicker than typical market belts. They are designed to last longer. Everything in this plant has at least a two-year warranty, including wear. This is not common,” Antech says.

Even the rock chutes are designed to last longer. Built into them are rock boxes – shelves on which rock accumulates, and onto which the pouring rock falls. The rocks on the shelves take the punishment, instead of the metal chutes. “Everything is designed, everywhere possible, to use rock boxes to protect against wear,” Paquette notes.

Antech says, “This will be the first plant in Quebec where we apply the best of the Eurovia group’s European and [North] American standards.”