Making safety the No. 1 priority 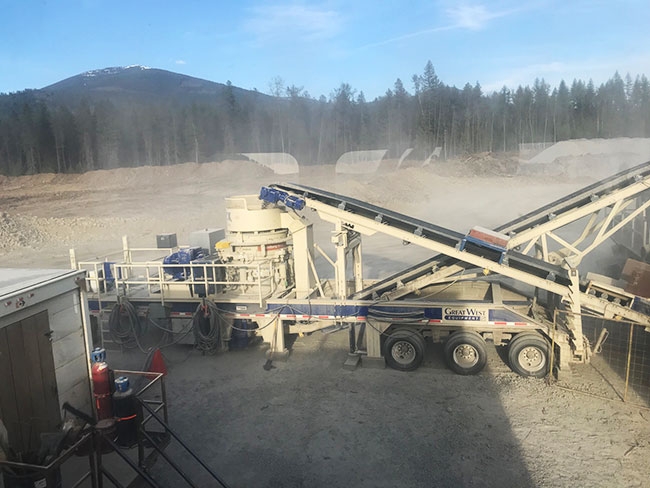 Anyone involved in the aggregates sector will tell you that crushing is a serious business. Running a crushing operation with the utmost efficiency can mean the difference between being in the black or in the red. One key factor for having a crushing operation run successfully is having a strong safety culture in place. It has been proven in the aggregates and roadbuilding sectors, that a company’s safety culture is often tied to the overall success (or failure) of its operations.

And as companies expand, they often require the cultivation of separate safety cultures for various types of operations. Simply put, what works for paving crews won’t necessary make sense for crushing crews, and vice-versa. This is true for even the most successful construction companies across Canada, just ask Kamloops, B.C.-based Dawson Group.

Family owned and operated since 1922, Dawson has been servicing Western Canada’s excavation and paving needs for close to a century, while also being an active producer in the aggregates market. Overall, the company has been one of the most successful and respected construction companies throughout the region for a long time. But even a successful operation like Dawson’s requires updates in its procedures and policies from time to time. And sometimes, for the good of the company, they need to take more dramatic actions.

Six years ago, Dawson’s aggregates division was in need of a serious overhaul. The company’s crushing business was struggling with high equipment costs, lower-than-expected productivity in its pits and quarries, and higher than desired workplace incident rates. To help meet the challenges facing the company’s crushing operations, Dawson Group hired safety manager Mark Jastrzebski in early 2012.

“It’s been a real roller coaster,” he says. “I feel very thankful that management decided, when I was hired, to go in a completely new direction. They wanted to set a new safety standard; and knew where they were wasn’t the place they wanted to be.”

Jastrzebski started the crushing division on a path to a safer future by creating a snapshot of the division’s past five years.

“Only by understanding the past can we accurately predict the future,” he says, adding that the snapshot showed less than desirable results. About two years after Jastrzebski started his work at the Dawson Group, the company created its current aggregates division, Eagle Rock Construction. At this point, the company had identified that it needed to take its entire crushing division in a new direction.

It didn’t take long for him to identify the roots of the crushing division’s underperformance and poor safety record: the workplace culture in the pits and quarries.

“Adding Thomas’ creativity and energy was such a great add for our organization. His work ethic is second to none. Health and safety for his crew was always priority No. 1. When identifying new team members, it was impressive to see how important it was for our management team to bring on workers who are willing to listen and learn,” Jastrzebski recalls.

For about three years, Spooner worked directly with Jastrzebski to address the safety issues affecting the crushing division. They sat down with the crushing crews, supervisors and managers, and slowly built all of the Eagle Rock Construction programs from the ground up, getting input from everyone involved in the process.

“The Dawson Group operations team has an absolute wealth of knowledge within it to draw upon,” Jastrzebski says. “We have over 100 years of industry experience around our boardroom table and everyone is willing to share that experience. Many of our team members are second- and even third-generation Dawson Group workers whom have devoted their careers to making our organization successful.”

Communication tools
Fixing the existing reporting system for near-miss incidents was one of the first things Spooner and Jastrzebski decided to address.

This deterred members of the crew from reporting any near misses, which meant not addressing potential safety hazards and maintenance issues in the pits.

“Mark was very instrumental in changing that, so the blame was taken out of it,” Spooner says. “We had managers that would love to write you up, but they didn’t want to spend any money on fixing things… Mark had to fight with those guys everyday and put the bug in management’s ears to look at it from a different angle. Without him, I would never have been able to take the steps I needed to take to get the office to the make the changes.”

Since removing the naming of employees from the reporting process, the number of near misses reported has significantly increased.

“If they see something they think is an issue, they bring it to me immediately,” Spooner says.

He has also added daily and weekly check sheets that his crews must fill out, as well as a monthly check sheet for the mechanics.

“The monthly [check sheet] that mechanical fills out every month covers everything from the tires up,” Spooner says. “These instilled the guys to take pride in what they’re doing. The crew I have now is probably the best crushing crew I’ve ever had. We have a crew of proud professionals, whom are even better people.”

These days, daily safety toolbox meetings are part of the regular routine for Eagle Rock’s crushing crews when they start their shifts. To ensure Spooner is well informed when managing multiple sites simultaneously, Eagle Rock management implemented a cloud-based reporting program for the safety meetings, where he can see in real-time who attends the meetings; any concerns that are brought up; and any actions taken to solve existing issues.

This is extremely helpful since Eagle Rock typically runs two to three active sites simultaneously, upwards of 900 kilometres apart. That said, Spooner says he has complete confidence in his current crew’s abilities and values everyone’s opinions.

“We run this whole division by committee, from the ground guys to the foreman, to myself, we don’t brush away anybody’s ideas for safety or production.”

Safeguarding equipment
Another aspect of the business that needed to be addressed to improve the safety culture of the division, and its production numbers, was to change how equipment in the pits and quarries was being operated and maintained.

Spooner identified several areas where equipment was being run unsafely, particularly on the conveyor side.

“I put guarding on all of the conveyors,” he says, adding that he won’t accept any new crushing equipment from suppliers that comes without the appropriate safeguards in place. “I made one supplier come back and install guards on all the conveyors.”

When it comes to portable crushers, Spooner says having your fleet equipped with the best safety features available can come with added costs up front, but those features are well worth their price in terms of safety and production.

“I find I get better value out of the high-end stuff,” he says. “For us, being portable, it’ll either be either a Sandvik or a Nordberg. It’s cheaper maintenance, cheaper repair, more throughput… any additional time you can keep your men off of the crushers is safety-value added. I bought a new Nordberg cone crusher last year. It has absolutely no open pulleys and gear boxes, a direct-mount electric motor and no open belts… safety doesn’t cut into your production, it actually enhances it; if you do it properly.”

In addition to ensuring the proper safeguarding was equipped on his fleet, Spooner targeted the existing maintenance procedures as a potential cause for on-site injuries, which were also leading to unnecessary, and expensive, downtime.

“When I first started here, I talked to the purchasing manager about getting some new loaders, he told me he wasn’t giving me anything,” Spooner recalls. “I asked him ‘Why?’ and he said, ‘Because you guys brake everything.’”

Spooner knew that if he wanted new equipment to help improve his division’s safety and production numbers, that he would need to prove that he could run the equipment much more efficiently than his predecessors and get the Dawson Group a better return on investment.

Spooner implemented a proactive maintenance plan over his first few years overseeing the division, and Dawson’s purchasing department quickly saw costs in the aggregates division drop like a rock. The costs for the parts and servicing of Eagle Rock Crushing’s fleet rarely stray from the routine maintenance and equipment replacement that comes with running an aggregate operation. Reduced repair costs weren’t the only benefit from his proactive maintenance plan. In combination with the new crew and safety policies in place, it also spiked productivity in the pits.

“Back when I started here, [the crushing crew] could never get over 70 [per cent efficiency],” he says. “ Eight-five is the magic number. It’s taken me three years, but last year [the crew] was at 82, and I’m pretty happy about that, compared to 60 to 70.”

Nowadays, Spooner has a higher chance of success when requesting new equipment because his team has a proven track record of maintaining current equipment.

“It instills pride in guys when they get to run a decent machine,” he says. “We really struggled in the past to get good people’s resumes in, but last year I was getting flooded with guys that are long-time members of the competition that would jump in a heartbeat if I had a job for them.”

“We’ve had one lost-time accident in the past four years – a guy tweaking his back cleaning out a big rock from a jaw crusher… he missed three days,” Spooner says.

After cross-referencing Eagle Rock’s lost-time success with the B.C. Mine Safety Awards requirements, Jastrzebski realized that the company would have qualified for an award three out of the past four years. He says next year he intends to submit the necessary paperwork.

“I will do everything I can to get that report in because I want that team to be recognized on the provincial level, and in the eyes of their peers, because they’ve earned it,” he says. “We would have qualified for a Certificate of Achievement (a minimum of 15,000 worker hours and an injury-frequency rate of zero) three of four times. They also have the Stewart/O’Brian Safety Award presented to companies with between 35,000 and 200,000 worker hours and have the lowest worker injury frequency rates. We’re sitting at zero right now, there’s no more you could ask for.”

Spooner and Jastrzebski are currently forming a safety committee and working with the province on creating an addendum to the BC Mines Act for the setup of portable crushing operations.

“We started to set a separate addendum with the BC Mines Act for portable because it was pretty well all made for the big boys,” Spooner says, adding that the current legislation simply isn’t practical for portable crushing outfits. “This isn’t a static system, we move every 30 days.”

The goal will be to build a standard for portable crusher setup over the next year.

“It will be many pieces, all encompassing,” Jastrzebski says. “We’ll use the processes built by the workers for what works best… we know without a doubt this is going to strongly benefit our organization.”

In addition to Spooner’s dedication to safety, Jastrzebski says that the company’s turnaround in its safety procedures would never have happened without the leadership of Lenny Kazakoff, Dawson Group’s paving and aggregate divisions manager.

“I can’t say enough about the kind of support that Lenny provides. He is always willing to find solutions and has supported the safety program 100 per cent,” Jastrzebski says, adding that continuing to work alongside Spooner and Kazakoff will only create a brighter and safer future for all of Eagle Rock Construction moving forward. “The rising tide will float all ships.”