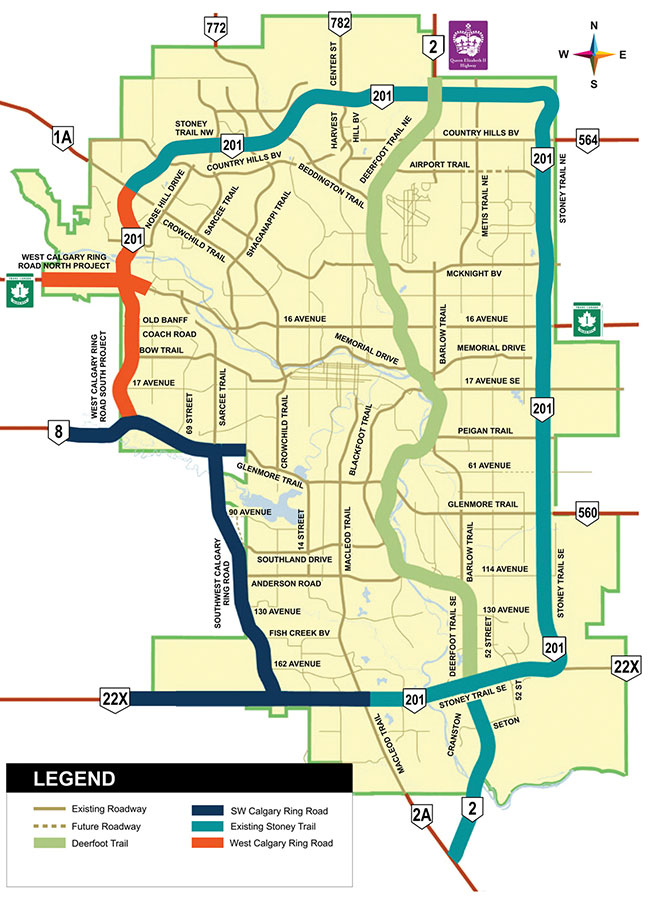 A map of the Southwest and West Calgary Ring Road. Images: Alberta Transportation.

Five years after construction began on one of Alberta’s biggest-ever infrastructure projects, the Southwest Calgary Ring Road has opened to traffic.

Sixteen million cubic metres of earth were excavated as part of the project. According to the province, if 1,650 NHL-sized rinks full of dirt were stacked on top of each other, that’s how much earth was moved for this project.

The project consumed 13 million kilograms of rebar and one million metric tonnes of asphalt.

Over the past two years, construction crews worked on landscaping, grading, completion of drainage, electrical work on street and traffic lights, signage, safety barrier and guardrail installation, utility work, base and finish paving, and line painting.

The federal government provided $333.6 million from its National Infrastructure Component toward the project budget.

“As Alberta’s government builds for the future, this critical infrastructure, only made possible by the goodwill of the Tsuut’ina people, will help ensure our workforce can meet the demand for highly-skilled workers in all sectors of the economy,” says Ric McIver, minister of municipal affairs in a statement.

“It is my fervent wish that the Tsuut’ina people benefit right along with other Albertans.”

The final section of the ring road, the West Calgary Ring Road, will fully open in 2024. Once complete, the Calgary Ring Road will provide 101 kilometres for travel and improved market access.